What did the post world war two civilian food ration consist of in the UK?

I can see rationing ended in 1954 and I can see some indication of what was being rationed per person during the war but what exactly did the post-war ration consist of?

i.e. food items and quantities per month per person, be in 1950?

(P.S. I'm thinking of reliving a month living off of this diet).

The short answer is that it was complicated.

The exact amounts of each rationed item could be varied by Food Orders issued by the government. The problem is illustrated by this debate in Parliament recorded in Hansard on 23 October 1950. Sir Herbert Williams (MP for Croydon, East) observed that:

"Under the Order which ... came into operation on 10th September, we were cut down to 4 oz. of butter a week."

So even in your specific year of interest (1950), the amount of butter available under the food ration varied by a significant amount between May and September.

Furthermore, inflation impacted on the price of foods. You might be entitled to meat valued at 1/- (one shilling = 12d) per week, but how much meat you got for your shilling changed over time. This point was made by Sir Charles Taylor (MP for Eastbourne) in a Parliamentary debate on Meat Rationing on 28 November 1950:

Looking back over the years, in 1940, when our supplies were threatened by enemy shipping, our meat ration was 1s. 10d. a week. In 1941, when our ports were being bombed and U-boat warfare made our position pretty grim, our meat ration fell to 1s. 2d. and subsequently to 1s. When the war ended we expected to see a vast improvement in our ration. What happened in 1946? The meat ration was 1s. 4d. In 1947 it went down as low as 1s. and in 1948–49 it varied between 10d. and 1s. 2d. One must remember that since 1949 the price of meat has gone up by 4d. a lb. so that 1s. 6d. ration today is equivalent to a 1s. 2d. meat ration before 1949. The Minister of Food tries to reduce the ration by bringing it to the same level as that at which it was in the darkest and grimmest days of the war.

Alongside specifically controlled foods, like butter, bacon, meat etc., the Ministry of Food 'points system' had been introduced in 1941. Initially, everyone had been given 16 points a month to spend as they wished at any shop that had stock of the items they wanted. This figure was later raised to 20 points per month, and remained at that level until the 'points system' was abolished in mid 1950.

However, even within the 'points system' the actual amount of food you would receive was not always clear, and smaller families - with fewer ration books - might actually be unable to purchase certain foods in practice, as illustrated by this commons exchange on 3 May 1950:

"The outlay of 12 points for a pound of biscuits or 16 for a pound of currants means that no points are left for the remainder of the month? Something must be done very quickly to give these people a chance of buying points goods.

This system would apply to the first half of your year of interest, after which all those goods would be off-ration - if you could find stock and if you could afford them.

The Personal Allowance for Civilians in 1948

The BBC has a page on its WW2 People's War website titled Rationing and my experience. It gives the following figures for 1948 (3 years after the war ended):

Bread, soap, bananas, and potatoes were also rationed during this period. In 1951 people could still only buy 2/- worth of meat each week.

(Rationing ended 8 years before I was born, but my parents remember rationing and both said this sounds about right from their memories of rationing. Both also said they you would often only find out how much you were entitled to when you visited the butcher, baker, etc.)

To further illustrate just how complicated the system was, there are a few more Parliamentary debates on the subject recorded in Hansard:

(these examples happen to be from 1952, but a search on the Hansard website found 316 mentions of Food Rationing for 1950)

Generally speaking, rationing in the civilian sector is different from what you think of as a military "food ration". There wasn't a box with predefined contents to get you through the day. Availability of foodstuffs varied; the rationing was put into place to ensure that no-one got more than their fair share of limited supplies. As several foodstuffs were not rationed at all, and people were free (indeed encouraged) to complement their rations with home-grown vegetables, small livestock etc. "the post war ration" didn't exist and would only be a part of what was on the dinner table anyway.

Now that we clarified that "rationing" means allotting the right to buy certain foods to individual people instead of giving out a fixed "ration", we can look at what was rationed and supplied during war time and post war. This mostly oncludes basic food stuffs that were deemed essential, like bread and was kept up as deemed necessary for each item on that list: 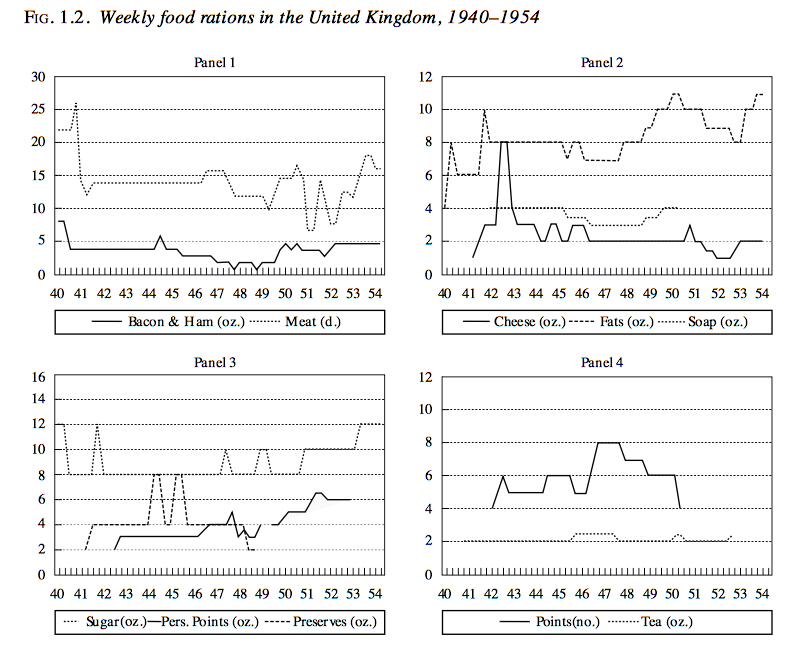 One item of peculiar interest might be the bread:

Consumption of tea, sugar, cheese, and meat rose during the late 1950s and early 1960s and the increase in butter consumption was par- ticularly steep as people moved away from margarine. Among controlled items only fish, consumption of which had been exceptionally high during the late 1940s, registered a decline, milk remained stable, and egg con- sumption rose sharply. Simultaneously, potato consumption fell by about 15 per cent and that of bread by nearly a third between 1954 and 1965. The most striking example of a change in consumption after the lifting of controls was the dramatic switch away from brown bread. After the abolition of National Wheatmeal Bread in 1956, consumption of brown bread dropped close to zero in a matter of months and the white loaf again became the principal bread eaten in Britain. Ina Zweiniger-Bargielowska: "Austerity in Britain Rationing, Controls, and Consumption, 1939–1955", Oxford University Press, Oxford, New York, 2000, p 33.

And this is especially disturbing, as the UK government did not ration bread durign the war, but after the war, in order "to look needy" (Ina Zweiniger-Bargielowska: "Bread Rationing in Britain, July 1946–July 1948", Twentieth Century British History, Volume 4, Issue 1, 1 January 1993, Pages 57–85, DOI)

So going for the typical contents of the British "food ration" – i.e. in a typical diet – during the time of existing food rationing, you'll find darker bread. But you'll find most items that made the typicla British diet after 1955 already in pre-1955 diets. Just mostly in different quantitties and qualities.

Looking at the 1950s diet, we find typical calorie distributions, together with class differences:

This wartime communism of more egalitarian food supply at the table is now painted as democratic and healthy even as sustainable consumption as Britain never had not enough food to begin with?

These are the official numbers. The private enterprise is usually called the black market were additional food items could be supplemented to the rationed foods. If anyone could afford prices for an unregulated private market, that is.

While in 1950 the criminal offenders on this private markets were still prosecuted for trading in each of the categories surveyed, by 1954 this was down to just "illegal slaughtering" and "meat", mainly, and a few carrots and potatoes traded privately, curiously.

To summarise how a "typical ration", that is diet, was constructed, from what was rationed and what was "digged" or "made do" during 1950, we might summarise it as:
we see the general pattern of more bread, more milk, red meat, relatively huge amounts of potatoes, copious amounts of tea, many greens, less fruits (and certainly not year-round but more for children than adults, per law) less poultry, less sugar, no junk food. (Compared to today baked beans make up 25% of total vegetable consumption in that group).
An even more colourful impression of diet features is in this list.

There is even an again politically motivated kind of experimental archaeology to recreate the circumstances and restrictions today:

Rations varied depending on supplies, but a typical weekly allowance per adult was 4oz of bacon or ham (about 110g), 2oz of butter (about 55g), 4oz of margarine, one fresh egg, 3 pints of milk, 8oz of sugar (about 220g). Babies and young children had priority for milk, but were also on half rations. Keep calm and carry on with a 1950s menu

24
Why was there lack of food during WW2 in the UK?