How many Black Panthers were killed in 'justified homicide' that was later overturned?

A few days ago I was in a cafe where I picked up a leaflet on labour disputes which went into some detail about Fred Hampton. He was a African-American activist in the Black Panther Party (BPP), in fact the chairman of the Illinois chapter of the Black Panthers and the deputy chair of their national executive.

He was killed in December 1969 along with another activist, Mark Clark in a raid by a tactical unit of the Illinois State Attorneys office, along with the Chicago Police Department and the FBI.

The following year, the autopsy report recorded the death under justifiable homicide. This was disputed by his family over the next decade with a final settlement in 1982 by a payment of around $2 million where a third each paid by the federal government, the city of Chicago, and Cook County.

Q. For context - what is meant by a tactical unit?

Q. How many Black Panthers were killed also under 'justifiable homicide'.

Q. How many of these judgements were later overturned by a civil case, or by other means?

Putting together various sources, the number of Black Panther Party (BPP) members killed during police actions between fall 1967 and August 1970 was at least 14. This period covers the BPP at its height in terms of membership, and is also when it was targeted by the FBI in particular. However, in at least six of the deaths, there is no

By 1971, the party was in steady decline following bad publicity and divisions in the leadership, and there do not appear to have been any further deaths due to police action.

According to Joel P. Rhodes and Judson L. Jeffries in a footnote in On the Ground: The Black Panther Party in Communities across America, citing the New Yorker article The Black Panthers and the Police: A Pattern of Genocide?,

Between the fall of 1967 and the end of 1968, nine police were killed and fifty-six wounded in clashes with the Panthers nationwide. Although there is some controversy concerning the actual number of Panthers killed by police during the same time, at least ten were reported killed and countless others wounded.

The article itself states 10 and gives fairly comprehensive details on all of the incidents between these dates, five in 1968 and five in 1969. Charles E. Jones, in On the Ground, gives six for 1969, but there are no details as to the identity of the sixth fatality.

To the above can be added three deaths while attempting to escape with hostages from a courthouse in August 1970 (see Marin County courthouse incident). Also killed was one of the hostages, Judge Haley. 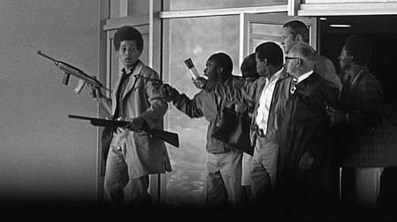 A year later, the brother of one of the BPP members killed in the attempted courthouse escape, was shot by a prison guard after attempting to escape. George Jackson was at the time awaiting trial for the murder of a prison guard in January 1970.

Trying to track down how many of these incidents were ruled 'justifiable homicide' has proven to be very difficult for some of these deaths as few sources say anything on this, except in the case of Hampton and Clark. However, the New Yorker article does give the following information (my highlighting):

The grand jury, after hearing thirty-five witnesses, concluded that the police had "acted lawfully," shooting Hutton in the belief he was trying to escape.

At the trial of Anthony Bartholomew, the surviving BPP member involved in this incident in which police officers Roberge and Limas confronted four occupants of a car, the defendant's lawyer

Gary Bellow, a well-known civil rights attorney..., noted in a memorandum filed with the court, "There is no dispute that the police officers, Norman Roberge and Rudy Limas, were criminally assaulted on August 5, 1968,"

Anthony Bartholomew, though, was cleared of assault with intent to commit murder.

The article then summarizes the ten cases:

Six of the ten Panthers were killed by seriously wounded policemen who clearly had reason to believe that their own lives were in jeopardy.

In the four remaining cases, the fatal shots were fired by policemen who had not themselves been wounded...in two of these deaths -- those of Armstead and Clark -- the police state that in each instance they were confronted by an adversary with a lethal weapon and had reason to presume that their own lives were endangered.

Aside from Hampton and Clark, there does not appear to be any evidence that any of these incidents subsequently led to a successful action to overturn the original verdict or any compensation being awarded.

Various other numbers were cited by the US media in the late 1960s, mostly stemming from a claim by the BPP's lawyer Charles Garry that 28 panthers had been killed. He subsequently changed this number several times, and admitted that 28 was a guess. The BPP also made various claims, the lowest of which was 12 deaths. At least some of these inflated claims included the deaths of four BPP members during two shootouts with the rival US Organization, one of which took place on the UCLA campus.

On a final note, a four-hour shootout in December 1969 between at least 200 officers and eleven BPP members amazingly resulted in no deaths despite more than 5,000 rounds being fired. It was the first action seen by the newly formed LAPD SWAT teams.

Not the answer you're looking for? Browse other questions tagged united-states 20th-century black-history or ask your own question.

4
How many illegal aliens were deported under “Operation Wetback”?
14
How many firearms were owned by civilian population between 1836 and 1912 in USA?
10
Was there any conflict/interaction between the Black Panther Party and the Nation of Islam?
2
How could a black woman be transported directly from Africa to Britain in 1760s?
11
How could black men serve as officers in the US army during segregation?
5
How well were the African soldiers equipped in the civil war?
0
What was the earliest black advocacy for Palestinian rights?
17
About how many immigrants were on the Titanic?
1
What, if any, futurists that went to war actually denied the movement later?