What was German GDP in 1919 in Goldmarks?

In January 1921, the Allied Powers grew impatient and established the reparation sum at 226 billion gold marks. The Germans countered with an offer of 30 billion.

This was later reduced to ℳ 132 billion:

The London Schedule of Payments of 5 May 1921 established "the full liability of all the Central Powers combined, not just Germany alone," at 132 billion gold marks. This sum was a compromise promoted by Belgium—against higher figures demanded by the French and Italians and the lower figure the British supported—that "represented an assessment of the lowest amount that public opinion ... would tolerate".

The Goldmark (gold mark) was the currency of the German Empire, and Versailles fixed the values of the "papiermark" at 1914 prices.

In order to relate this to today's economics I would be interested to know what 226 billion was as a percentage of overall German GDP. The only figure I can obtain is expressed in 1960 US dollars. I need to know what it was in Gold Marks.

Does anyone know of a way of finding out?

Simon Kuznets only came up with the GDP in the 1930's and he was not particularly happy with the measure he created. GDP for any time before that, therefore, is more of an estimate as economists need to reverse engineer what they can from census data and similar statistical information.

German GDP in 1913 is established as by Myszczyszyn in 'Use of econometric modelling to evaluate the impact of the railways on economic growth of German reich (1879–1913)'. I am not fully convinced as these numbers don't make sense. I'm also not sure about the reference to "1956".

GDP per capita, which is a better measure for determining social welfare, grew much slower; it was 475 bln M in 1879 and it reached 873.76 bln M in 1913, the average annual growth rate was 1.73%. That was due to rapid population growth in Germany.

When I try the same geometric progression from 1879 to 1913 for the GDP, I get a 1913 value of ℳ 51.0 bln. Even extending this to 1956 only gives a total of 177 bln. The GDP per capita geometric progression makes sense (I get the same value), but the "bln M" claim is preposterous. These numbers should, therefore, be treated with the uttermost care!

Alternatively, the net national product (NNP) is estimated as a compromise value of ℳ 53.7 bln by Burhop and Wolff in 'A Compromise Estimate of German Net National Product, 1851-1913, and Its Implications for Growth and Business Cycles'. However, the NNP is a wildly different measure to the GDP and not very helpful in determining the other.

How the Great War affected German GDP is a tough question and the answer doesn't seem to be clear-cut. Baten and Schulz estimated that the GDP in 1917 was 69% of the 1913 value. 1918 would have reduced this further and the territories lost in the peace treaty would have had a similar effect.

Most of the other research that comes up only cites relative values -- percentage of the Net Domestic Product compared to 1913. As such, we also have: 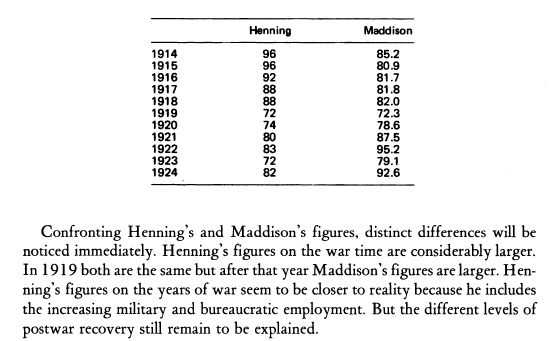 The oft-cited work by Hoffman is 'Das deutsche Volkseinkommen 1851-1957', and nearly all values are quoted with respect to this. I suspect it may contain better numbers, but it only seems to be available on paper as well as in German.

The original Versailles' Treaty value of ℳ 226 is nearly six years' worth of NNP, while the reduced ℳ 132 bln is 3.5 years' NNP. I speculate that the ratio might hold even if the actual GDP is different. Better economists than me can point out how wrong this comparison is.

Lastly, a note on Goldmark conversion from the Bundesbank:

The Goldmark is a special case insofar as it was neither a legal unit of currency nor legal tender, but a short name for the monetary value (price) of a given amount of fine gold payable in monetary tokens of the relevant official currency, ie the Mark from 1876 to 1924, and the Reichsmark from 1924 to 1948. Generally speaking, a Goldmark corresponded to the price of 1/2790 kilogram of fine gold.

Up to the outbreak of the First World War, the legal gold parity at the time meant that one Goldmark was equivalent in value to one Mark. When the Reichsbank suspended the exchange of banknotes for gold on 31 July 1914, the value of the Goldmark in paper Mark increased with rising inflation according to developments in the US dollar exchange rate. On 20 November 1923, the Mark’s exchange rate against the Goldmark and the US dollar, which was likewise on a gold standard, was stabilised. Subsequently, and until the introduction of the Reichsmark on 11 October 1924, the Goldmark had a consistent value of 1 trillion Mark.

You said that you could only find the answer in 1960 US dollars. I found a site (https://www.usinflationcalculator.com/) that gives us the value of a 1960 dollar compared to 2020 (866%) so you should be able to find the value by simply multiplying it by 8.66. You might want to double-check me though.

2
Did Helsinki have higher standards of living than Saint Petersburg when it was a part of the Russian Empire?

6
How has Chinese GDP as a percentage of world GDP changed over time and why?
6
What would be the GDP of the Roman Empire?
2
Historical tax revenue as a proportion of GDP
4
GDP for World Powers during the Napoleonic Era?
2
For U.S. history 1800-1830, what was GDP by sector and industry?
3
What explains this dip in Indonesian GDP growth rate in 1982?
11
Was the Weimar Republic referred to as such by contemporaries?
5
What does this 1960 West German political cartoon mean?
6
When was the last time the US had the highest GDP per capita?
5
What did people used to exchange for goods during the 1920s German hyperinflation while the official currency was not trusted