Which army uniform is this (2nd Boer British or WWI US)? 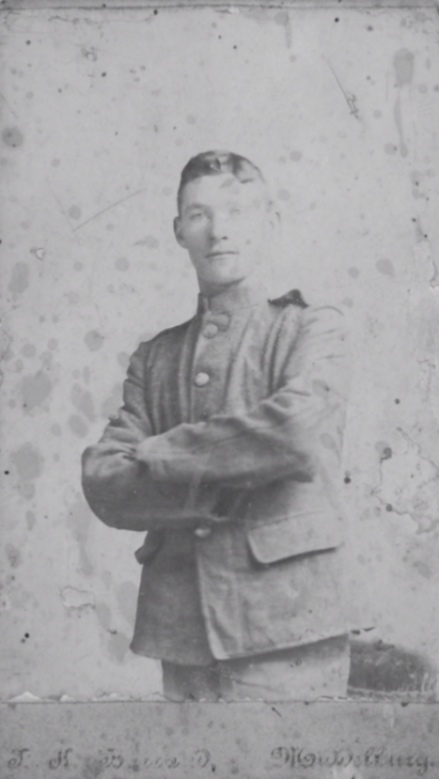 Wondering if anyone can help me identify which army uniform this is? My GG Grandfather (b. 1878) signed up for the Second Boer War in the British army as an Irishman and possibly WW1 in the American army after emigrating in 1902 so I don’t know which era it’s from.

Any help at all would be greatly appreciated!

The word at the bottom right of the photo is almost certainly the town of Middelburg. Apart from the original one in the Netherlands, there are two in South Africa, one was in the Cape (now the Eastern Cape Province) and the other in the Transvaal (now Mpumalanga Province)

The only thing I could add here would be that, besides the coat buttons appearing unusually large in comparison to those then in use on U.S. military uniforms, his uniform coat also has no "collar brass" (which would have been blackened brass in this era) that would have been required uniform wear for an enlisted man in the U.S. Army during World War I. The one on his right collar would have indicated the U.S. military, and the one of the left collar the military specialty in which he served (infantry, artillery, engineers, etc.).

Not the answer you're looking for? Browse other questions tagged world-war-one identification uniform boer-war or ask your own question.

7
What would the Royal Sussex Regiment have been doing in South Africa between 1900-1902?
0
Where can I find primary sources on mortars/artillery in world war one?
4
Can anyone help identify this French military uniform?
11
Can anyone identify my great grandfather's military uniform?
4
What British WW1 uniform is depicted on this photo from Taunton?