When did the last (non-tourist) commercial stagecoach line run in the USA? 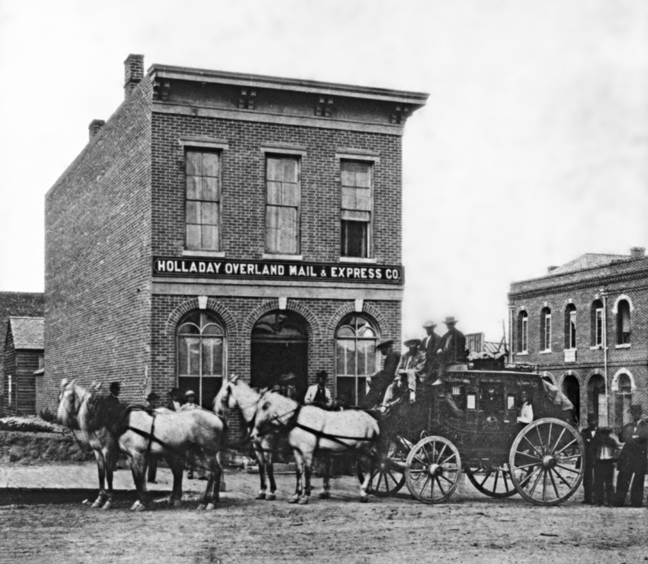 Across from my office is a small Wells FargoTM bank. As I glanced out the window at it today, it made me think of the old stagecoach lines of the American West. I wondered when the last one ran commercially (aside from tourist purposes) with either passenger or mail or express (gold / silver / bullion / freight) service. From Wikipedia I know that

but my question and interest is with regards to stagecoach operations in the United States.

What was the date of the last known regular1 commercial (non-tourist) stagecoach service in the USA? I would be happy to know just the year but if a more specific date can be found, that would be fantastic.

Sources I have searched thus far vary (differing dates or approximations), and have been vague on this question (some refer to the early 20th century - quite a span of time! others mention a decade or within a range of years, etc.). Many reports are localized to specific States or western towns or stagecoach lines. Thus, without searching through State-by-State and town-by-town and company-by-company archives, I am hoping someone can find an historical work which has already done all that research and compilation into a single record.

Here are some examples of what I have been able to find thus far (and some of these are not what most would consider authoritative sources, my emphasis added to each):

The coming of the railroads signaled the end of the stagecoach era in Texas. Stage lines continued to operate from railheads into frontier areas not yet reached by rail and continued to serve bypassed rural areas. One of the last of the great Texas stagers was C. Bain and Company. Charles Bain's company operated from early 1876 into the 1880s with a route from San Antonio to Fort Concho, connecting with another Bain line from Ben Ficklin to El Paso and Mesilla, New Mexico. Bain also operated stages between San Antonio and Laredo. However, Bain and other stage operators realized that the railroads would eventually put the stage lines out of business by winning the mail contracts. By the early 1880s the stagecoach era was essentially over, although there was some stage service in rural areas past 1900.

The End of the Reign of the Stagecoach
Ben Holladay made a wise financial decision when he sold the Overland Mail Express Company as railroads soon became the primary method of transporting both humans and cargo, but trains were still confined to their tracks. It was the introduction of the automobile that finally brought an end to the use of stagecoaches in the early 1900s.

Source: Legends of America - Stagecoaches of the American West

Where the railroads ended
In 1869, at Promontory, Utah, dignitaries hammered in a Golden Spike, which joined the rails of the Transcontinental Railroad — and ended Wells Fargo’s overland stageline.

However, stagecoaches continued rolling wherever the railroads did not. Wells Fargo contracted with independent stageline operators to carry treasure boxes and express, even into the early 20th Century.

Wells Fargo used stagecoaches to do business for customers from its first years in business to the 1910s.

Until buses became popular around the time of World War I, many a road-weary stagecoach continued to meet passenger trains and provide transportation to remote villages in the West.

The last use of stagecoaches occurred between 1890 and about 1918. Some have noted that the railroad affected the collapse of stage coaching, but it was more likely the motorbus that doomed horse-drawn transports. After the main railroad lines were established, it was frequently considered impractical to loftier elevations by rail should the distances be short. By 1918, stagecoaches operated only in a few mountain resorts or through western national parks as part of the Wild West romance for tourists.

Throughout the early part of the 20th century, stagecoaches continued to operate in areas of the state not served by railroads. As late as May 1918, a stage line ran between Llano and Mason, Fredericksburg and Mason, and Brady and Mason. Motorbuses and automobiles operating on improved roads finally sent stagecoaches and their teams and drivers to the barn for the last time.

Mail coaches were slowly phased out in Britain during the 1840s and 1850s, their role eventually replaced by trains as the railway network expanded. The same thing occurred with the express companies use of stagecoaches in the American west in the late 1860s and early 1870s. However, in some places in the United States, stagecoaches continued to deliver the mail as late as the 1920s.

Final American use: Short haul
The last American chapter in the use of the stage coaches took place between 1890 and the late 1920s, when the road to Young, AZ was paved and the stagecoach was replaced with a Ford. In the end, it was the motor bus, not the train, that caused the final disuse of these horse-drawn vehicles, and many "automobile stage companies" were established in the early 1900s.

This historical guide presents a snapshot of how the stagecoach contributed to the settling of the West. This book offers readers an accurate and comprehensive look at this exciting era in American history. The remarkable development of the United States during the turbulent seventy years from 1850 to 1920 can be attributed to many factors-not the least of which was the stagecoach.

1 After many searches and lots of reading, I found this interesting bit of information regarding "The Last Stage Coach" in the History section of Texas Almanac's website in an article titled Stagecoaching in Texas (my emphasis added):

The last known use of a horse-drawn vehicle for regularly scheduled public transportation came in Lake Jackson during the gasoline shortage associated with World War II.

People who lived in Lake Jackson, almost all of them connected to the newly opened Dow Chemical plant at nearby Freeport, needed a convenient way to get from their homes to downtown businesses and to get their children to the day school operating in the Community Center.

Noting that Dow still used horses and mules to pull graders, someone among the business leaders suggested that the nascent town should provide its residents transportation with a modern day stagecoach.

Committee members secured a used lumber dolly and added two automobile axles with balloon tires. To accommodate a team of horses, a wooden wagon tongue went on the front of the vehicle. A row of wooden seats anchored each side of the coach, with an aisle down the middle. Passengers boarded by walking up a two-step platform on the rear of the coach. Finally, a rounded canvas top provided protection from the blistering coastal sun. The conveyance, which could carry a couple dozen people, looked more like a long covered wagon than an Old West stagecoach, but they called it their stagecoach.

Because of this description, for the purpose of this question I would exclude this irregular though fascinating case from consideration.

He began working as a scenarist for silent films in 1912 (reportedly at his wife's insistence). In 1918, he published "The Planeteer" in All-Story Weekly. His "Dr. Kinney" stories were reprinted by Ace Books in 1965, and with Austin Hall he co-wrote the novel The Blind Spot.

As I remember reading, Flint was planning to move to a town in the countryside at the time of his death in a mysterious auto accident.

The "apart" was about to end because at the time of his death he was set to move to Nevada City where he'd been hired to drive the daily stage. This employment, engineered equally by Homer and Mabel, would have made it possible for a father to see his family every day.

Nevada City is in California, and about 18.9 miles by road from Washington, California where his wife Mabel had a job as a schoolteacher.

PS here is a link to the Nevada County California website. https://www.nevadacountyhistory.org/ 5

Not the answer you're looking for? Browse other questions tagged united-states 20th-century 19th-century transportation old-west or ask your own question.

14
Why did the USA stay out of the League of Nations?
5
When did USA start to help developing countries?
8
When did Harvard give its last entrance exam?
13
When did the last formal and recorded duel take place?
9
How did the US fall behind in airplane technology from 1909-1917?
10
Why didn’t the U.S. annex the entire Spanish East Indies at the end of the Spanish-American War?
1
When did the Baltimore & Ohio Railroad connect Baltimore city to any Ohio city?