Is that armistice wagon photograph authentic?

However, it seems hard to imagine this photo could have been taken by night. According to this website the sunrise time in Compièges on November 11th is 7:52 AM (UTC+1), which makes it on 1918 rising at 6:52 AM (UTC).

So this armistice photograph would have been taken in the dark, 1h22 before sunrise. This makes me wonder, is this photograph really authentic ?

(Note: At the time of asking this question, Wikipedia stated that the photo was taken at 5:30 AM, this was edited since by Evargalo)

The photo is authentic. It is in numerous reliable archives. The exact time given in one wikipedia is just overly precise. That is: wrong. No other Wikipedia page gives that time.

French Wikipedia: On November 11, 1918, around 5:30 a.m., just after the signing of the treaty, at the exit of the "Armistice wagon": in the foreground with a cane and a kepi, Marshal Foch, surrounded by the British admirals Hope (right) and Wemyss (left).

Looking at the picture more closely reveals things Evargalo noticed in a comment:

I don't believe artificial lights could help taking such a picture by night. It might enlighten the front scene (the characters and the wagon), but not the trees in the background. The clear sky in between the trees on top of the picture can only be explained by daylight or (very unlikely) later photo-editing.

Then there are the natural soft shadows from diffuse illumination indicating a certain early time of day. The absence of harsh contrasts points into that direction as well.

Earlier, when Foch signed the document, this photo was taken: 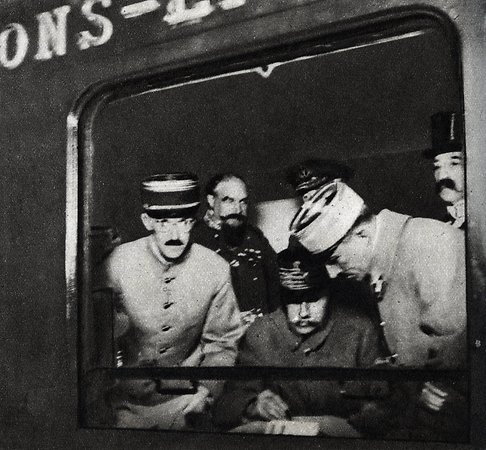 More importantly, other sources give another time: 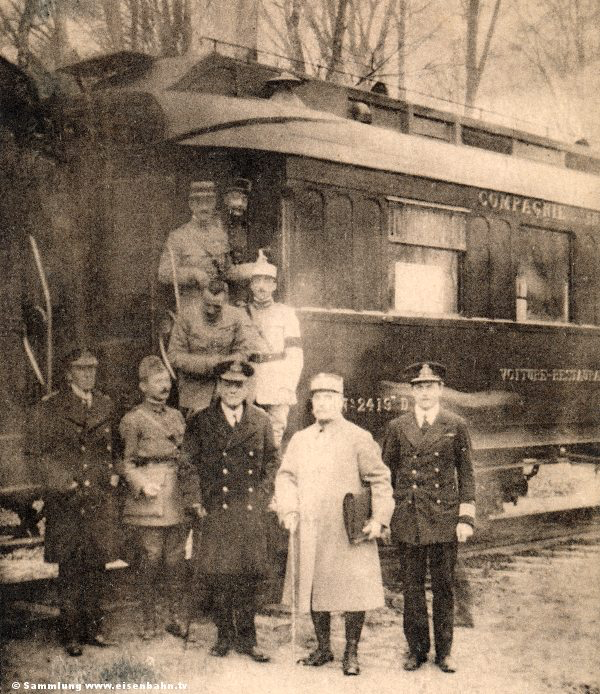 And directly asking google gives this

Whether it's a typo or not, for me that is still shortly after the signing, as soon as lighting allowed.

The exactness of the minute is of low certainty. Wartime, summer time, double-summer-time, even in November, all factor in. Local time for Germany, solar time at the place, British time; French time should be CET zone as well.
It is doubtful that the photographer really noted the exact time when he took the picture and I suspect that all those times given around the net are pseudo precise, as they all seem to extrapolate from 'reasons'.

Just one thing is sure: those people did not sign the papers, get immediately to a picture and then cable important instructions or celebrate before dawn. The photo was staged sometime after signing and when lighting was good.

French Wikipedia may be in error here. The English version shows the same photo but no specific time or date for it is mentioned.

Given the timing involved, the 05:30 time may of course well be accurate for the moment the gentlemen left the carriage, but doesn't have to be when the photo was taken.

For such a momentous moment, it's quite feasible that they staged a photo opportunity some time later for example, as it would take time for photographers to be called to the scene.

Another reason to think the actual time of the photo is later than 05:30 in the morning is that Foch wasn't around for the negotiations, arrived only for the signing ceremony (the timing of which isn't mentioned by Wikipedia, but if we assume WW1 era technology they'd likely have a runner sent to Foch's residence and have him return by car to the site, leaving probably up to several hours in between, enough time as well to call in photographers.

Wikipedia states that news of the signing was spread around 09:00, so we can assume the actual signatures were placed (and the photo taken) somewhere between the 05:20 moment it states as the armistice having been agreed upon and 09:00 when it was officially announced to the world.

That gives enough time for the sun to come up (which happens between 7 and 8 in the morning as you say in the area this time of the year).

One caveat: where the Wikipedia article on the armistice states that Foch wasn't there for the negotiations and only arrived for the signing, the article on Foch himself states he was there at 05:00 that morning.

If that's true the signing can indeed have happened at 05:30, in which case the photo can have been taken at any time after that, again leaving time for runners to alert staff photographers and possibly have artificial light brought in to light up the scene (which may have been there already to facilitate the negotiations themselves).

In the end, I guess we can only speculate about the exact timing as sources seem contradictory and we can't really know whether photographers were even present or nearby, let alone how long it would have taken them to arrive on being called.

Not the answer you're looking for? Browse other questions tagged world-war-one france photography or ask your own question.

9
Could you help me identify this photograph that was taken shortly after World War 2?
2
Is Thomas Wedgwood's picture actually the first photograph?
48
Is the photograph "England’s Revenge in India" real, staged, or fake?
8
Did the Central Powers during World War 1 try to sue for peace before the Armistice?
51
Why was World War I ended on Nov 11 11:00, rather than immediately upon signing the armistice?
8
How common was the German desire for revenge for the humiliation of 1918 armistice?
21
When did Josef Wissarionowitsch become "sexy" Stalin?
16
What did Germany gain from the Armistice of 11 November 1918?
5
Did Man Ray photograph Nimet Eloui Bey in the all together?
8
What regiment is this (~1826-1861) French cuirass cavalry uniform?