How old is Philippe Buache's map of New Discoveries?

The University of Hawai'i at Manoa owns a copy of this map of the Pacific by Phillippe Buache. Its library record gives the date "Circa 1750"; I wonder if we can be more specific.

The map shows ports in California that were not founded until 1769, though according to Erwin Gudde, the port names predate their foundation. It includes the legendary Pacific islands Rica de Plata and Rica de Oro as well as Los Jardines; I don't know when the existence of these places was debunked.

A lower bound for the year is 1741, as the routes of Bering's second expedition in that year are shown; an upper bound could be 1773, when a book by Captain Cook brought Hawai'i to European attention. If Buache had known about Hawai'i, the map could likely have extended a little farther south to include it.

Can other clues here help narrow in on when the map was drawn?

The date depends on whether one is referring to date of completion or date of printing. The map was completed by April 1750 but the 1st edition was not printed until June 1752.

The earliest public presentation of the map would appear to be the 8th of April 1750 when it was presented to the Academie des Sciences in Paris.

Note the attribution is to Philippe Bauche [sic] AND Joseph-Nicholas de l'Isle. Buache was married to the daughter of the cartographer Guillaume de l'Isle, half-brother of Joseph-Nicholas.

Fonte's entrance is at roughly 63°N latitude. In the face of criticism, De L'Isle published another map in September 1752 moving the entrance to 53°N, as the letters had stated. This caused a rift between De L'Isle and Buache, as the latter stuck to the initial misreading of the letters.

Thus the University of Hawaii map is the one from which the June 1752 printing made as it shows Fonte's entrance at 63 degrees N latitude, but it is not identical to the one shown on the Raremaps site. Included in the text top centre on the latter are the words 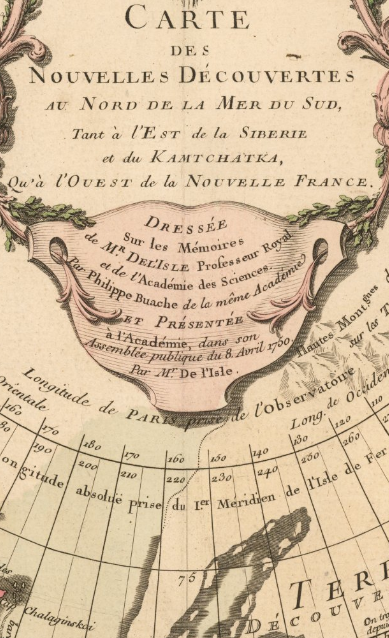 There is yet another copy of the map here, made after the rift between de l'Isle and Buache and with the date 'September 1752'. It is described as

an unrecorded state of Joseph-Nicolas de L'Isle's (Delisle) map of the Northern Pacific Ocean and Arctic.

and is attributed to 'The De L'Isle family' (which included Buache) and Jacques-Nicolas Bellin. 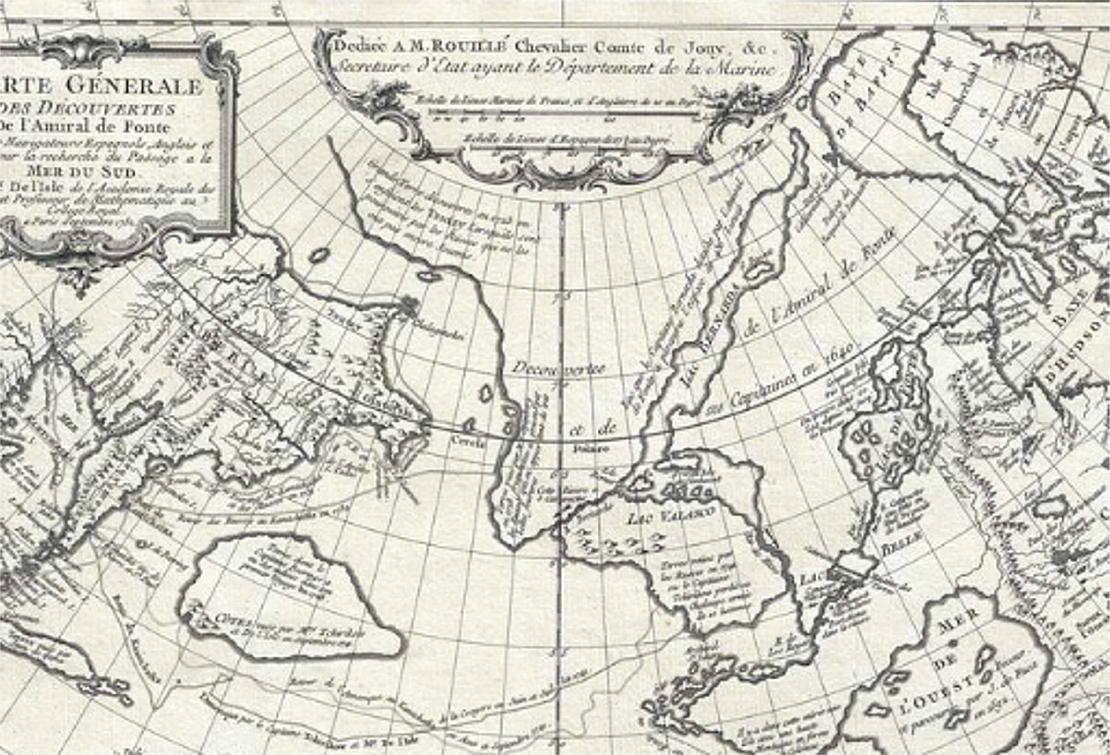 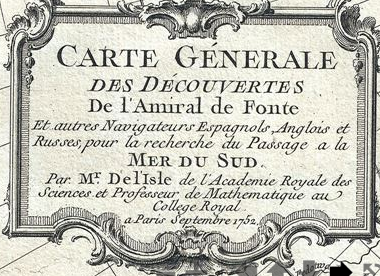 This is the text in the top left corner of the map above. Source for both images: Geographicus

As the OP noted, there are dates on the map itself. These refer to discoveries and voyages made. The latest date evident is 1747:

This refers to Wager Inlet

...first probed by Christopher Middleton in the early 1740s and supposedly one of the possible sources of a Northwest Passage.

1747 is also when De L'Isle left Russia for Paris "with a large map collection". Presumably, he and Buache then started work on the copy which they presented on the 8th of April 1750. Perhaps worth noting is that de l'Isle had previously made a map of the Pacific in 1737.

Not the answer you're looking for? Browse other questions tagged maps age-of-discovery chronology or ask your own question.

14
What are the historical reasons for the conventional map orientation?
6
What is “discovery” in the historical sense? How do historians today view and describe “discoveries”?
7
Where can I find open historical map data?
44
What is the logic for the map maker classifying the map this way, specifically in Canada?