Was Nixon's Vietnam claim right before the 1968 election true?

In Richard Nixon's final appeal to voters on NBC right before the 1968 Presidential Election, he made an explosive claim about the Vietnam war. Here is how the Eugene Register-Guard reported it:

[Nixon] said he had a “very disturbing report,” gleaned from an unnamed Air Force general, that the enemy was moving thousands of tons of supplies into South Vietnam.... [Hubert] Humphrey branded the Nixon charge "totally irresponsible," and accused the Republican of trying to "frighten the American people."

This charge was a big deal at the time, because then-President Lyndon B. Johnson had negotiated a ceasefire in Vietnam, and Nixon was casting doubt on whether it was working.

Unless a particular Air Force General 'fesses up in an autobiography, the first question is unanswerable.

On the second question, absolutely that was happening. It had been happening for years, escalating in quantity and variety of supplies transported, since at least 1959. The supply trail was known as the Ho Chi Minh Trail, ran through the mountains of neighbouring neutral Laos and during the final weeks of the 1968 campaign the Air Force was making final preparations for Operation Command Hunt against it. This bombing campaign began November 11, just 6 days after the Nov. 5th election. 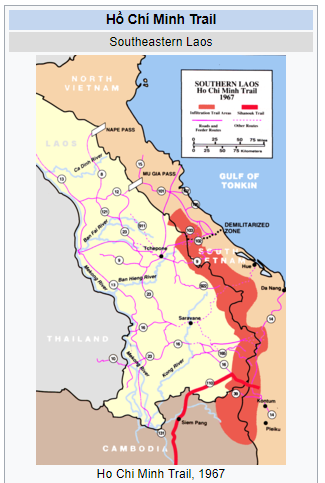 As noted in Wikipedia, the North Vietnamese had spent most of 1968 expanding the Trail following the Tet Offensive in January that year.

Nixon’s statement regarding the logistic capacity of the PLAF/PAVN appears substantially correct, even if it discounts indigenous supply by NFL/PRG manufacture and capture of ARVN materiel.

Whether Nixon was informed of this by an airforce general cannot be verified to the standards of Sceptics, but it is reasonable to assume that Nixon had been briefed by someone who knew the logistic situation and I’m inclined to extend the benefit of the doubt here. The claims are substantiable and the claimed source is reasonable. Nixon didn’t have any motivation to lie here; shocking people with the truth had the desired political effect.

Not the answer you're looking for? Browse other questions tagged united-states election vietnam-war 1960s richard-nixon or ask your own question.

0
What was the death toll of non-Americans in the Vietnam War?
6
What was done to prevent electoral fraud in Texas following the controversial 1948 election?
7
What was the influence of dead people on Johnson's 1948 election victory?
9
Why was Truman considered a heavy underdog in the 1948 election?
12
What was the Catholic Church's opinion of Diệm's South Vietnam?
4
Why was Nixon never tried for treason for allegedly sabotaging the 1968 Peace Talks?
4
Was there any official affirmation from the US government that they would win the Vietnam War?
5
Who conducted the first “straw poll” in U.S. election politics, and when was it conducted?