What factors led to much higher US war bond sales and participation rates in WWII over that of WWI? 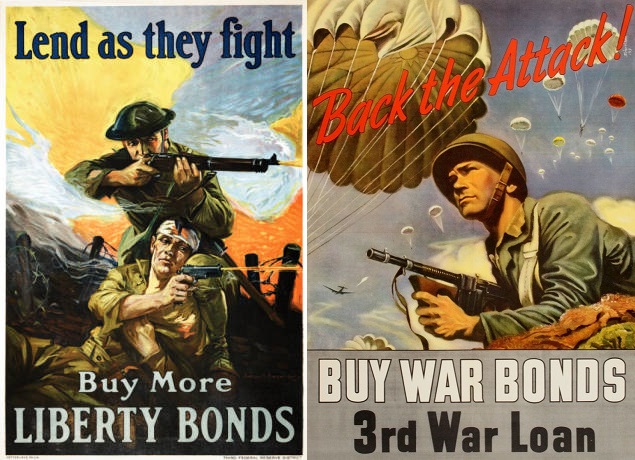 Financing World Wars I & II in the United States

In reviewing the United States efforts to finance WWI and WWII debt through the sale of bonds, I discovered some interesting statistics when comparing the two which led to my question here.

The WWII figures dwarfed the WWI figures, even after adjusting both for inflation. So I then factored in the US duration of the two wars (WWI = two years, WWII = four years) and compared the numbers after dividing by the number of years of opportunity. WWII still dwarfed WWI.

Then I compared the total dollar amount per person (in 2018 dollars, apportioned against the total populations in 1918 and 1945) and WWII topped WWI again.

Finally, I factored the number of years of opportunity into the population to calculate the bond purchase dollar value (in 2018 $) per person, per year of opportunity. WWII wins again.

To be fair, the US Liberty Bond effort met its goals, as glowingly indicated in the Federal Reserve's report on Liberty Bonds. However, the other sources cited refer to the WWI Liberty Bond sales efforts as disappointing. Whether the WWI sales were a success or not (and they certainly appear to have been a success), the WWII participation rate and resulting money raised, after adjusted for inflation and apportioned by population, far exceeds the earlier war's results.

The methods for advertising the bonds in both wars were very similar, including mass marketing through the media of the day, plus drives with extremely popular celebrities in both wars. But the results differed greatly. What factors contributed to WWII's US bond sales results far exceeding those of WWI?

Below are the numbers from my calculations.

All things being equal (population, years of opportunity, sold bond value adjusted for inflation to 2018 dollars), and with similar marketing strategies in both wars to sell the bonds, what contributed to the higher participation rates and higher dollar contributions per capita in WWII over that of WWI? Has there been an historical analysis of this phenomena?

See also: Update: While numbers don't lie, they can also be very misleading. The numbers above are accurate and appear to indicate that WWI's US bond drives were a disappointment when compared to WWII's bond drives. The answers below from Lars Bosteen and JMS highlight important factors of the greater effectiveness of the broader mass marketing capabilities available in WWII through radio, and a greater familiarity with investing by the populace in WWII over WWI, and a more personal and emotional connection with the events that catapulted the US into WWII and the early setbacks in that war that galvanized a steely resolve in Americans, as well as a key factor brought out in the answer by Pieter Geerkens (which deserves more upvotes) being that the WWI drives achieved their goals and the bond issues were oversubscribed (indicating had more been issued, more would have sold, which would have driven the WWI bond numbers higher).

Numbers don't lie, but they also don't tell the whole story. The story is told well by the three answers (thus far) below. I can only accept one answer, but all three are excellent and helpful.

The article cited by Pieter Geerkens asserts that all the bonds issues were oversubscribed, and this is backed up by this other source. Wikipedia here and here, Investopedia and the Museum of American Finance all broadly agree with this, but with qualifications on the first issue especially. This answer therefore deals primarily with the first issue of Liberty Bonds in April 1917. For subsequent issues (2, 3, 4 and 5) and the fact that "the supply of Liberty Bonds was limited", please refer to Pieter's answer.

In short, while the statistics cited by the OP may appear indicate that the WW2 drive to raise money through bonds was far more successful than the one in WWI, the latter nonetheless met with considerable success considering the circumstances.

According to the article in Investopedia,

Liberty Bonds were only moderately successful when first issued in April 1917, which embarrassed the Treasury Department.

The Museum of American Finance article explains the reason for this:

The promised rate of interest on the first Liberty Bond issue, 3.5%, was too low for market conditions, so subscription books were slow to fill.

Also, prior to the Liberty Bond drive, few Americans had any experience of investing as individuals. Treasury Secretary William McAdoo

succeeded in creating a popular financial movement. In doing so, he induced millions of ordinary Americans to save by investing in Liberty Bonds and introduced most of those households to the ownership of bonds for the first time.

Nonetheless, the first issue ended up being oversubscribed by 52%, but Owlcation observes that for the first and second issues:

Although it was claimed that they sold out, it is probable that they did so because they were traded under value.

This point is also mentioned by Lawrence D. Schuffman in Funding of the First World War through The Liberty and Victory Loan Bonds 1917-1923.

On balance and given the circumstances, it seems fair to conclude that the Liberty Bond drive was a considerable success given that

About half of ALL American families purchased these bonds and a third of them had annual incomes below $2,000.

In effect, the WWI Liberty Bond drive went some way towards paving the way for the War Bond drive during WW2, a task almost certainly made easier by the deeper involvement of the US (see JMS' answer).

Further, although thousands were mobilized to support the Liberty Bond drive, the limited media possibilities of the time made engaging the general population a far more challenging task than during WW2 when War Bond drives featured heavily on radio and in movie theaters.

When the US entered WWI, movie attendances and radio set ownership were much lower than in 1942. The US government had to rely heavily on print media and an army of volunteers to canvass local communities. Sure, celebrities (Chaplin, Fairbanks & others) helped but they had nothing like the reach that celebrities had during WW2.

As the table above shows, even in 1922 audiences were only just over a third of what they were during WW2. War bond advertising was very prominent in WW2 movie theaters, and millions saw this advertising every week.

Similarly, the first clear audio broadcasts were not made until 1919; by 1940, 82% of households owned a radio. Thus, in WW2, the US government had three ways to reach millions of people - print media, radio and movie theaters. In World War I, only print media could easily reach those millions of people they needed to buy bonds.

Question:
All things being equal (population, years of opportunity, sold bond value adjusted for inflation to 2018 dollars), and with similar marketing strategies in both wars to sell the bonds, what contributed to the higher participation rates and higher dollar contributions per capita in WWII over that of WWI? Has there been an historical analysis of this phenomena?

To put it simply, Pearl Harbor happened. The Japanese attacked US bases across the pacific (Hawaii, Guam and the Philippines), which were all United States possessions. Simultaneously the Japanese attacked British colonies Hong Kong, Singapore, and Malaya.

Without warning and during peace negotiations and most Americans took it personally. It coupled with nationalism formed a powerful appeal to the American public to support the war in whatever capacity they could. To many that meant war bonds.

Prior to that attack the United States had one of the largest and most powerful peace and non interventionist movements in it's history occurring. The American First Committee which boasted 800,000 dues paying members in Sept 1941, including American hero Charles Lindberg. Disbanded Dec 11, 1941 three days after Pearl Harbor. The non interventionists were so strong they forced Franklin Delano Roosevelt (FDR) during his 1940 re-election campaign, to make a pledge that he would never send American boys to fight a foreign war.

So anti interventionist was the nation prior to Pearl Harbor that on August 12, 1941 US Congress held a vote to effectively disband the United States Army, and it failed by one vote.(*)

(*)In 1939 FDR tried to increase the size of the United States military a precaution to US involvement in WWII. In 1939 just before the Uk declared war on Germany, the United States had a military about the size of Portugal or Belgium, roughly 180,000 men. The US military was more accustomed to fighting Indians historically than participate in European Wars. Congress allowed FDR to begin to train more soldiers but only allowed them to serve in active duty for 1 year before going to the reserves. With this program FDR was able to increase the size of the United States Army to 1.5 million by August 31, 1941. At which time congress tried to terminate the program on the eve of war. U.S Army Center of Military History at Fort McNair in Washington, D.C., the center’s James Tobias provided the given tally 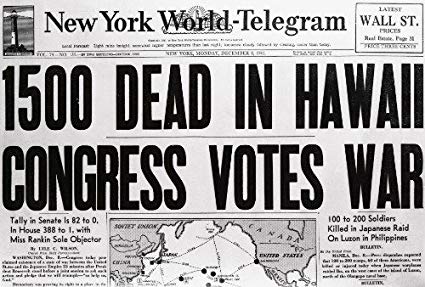 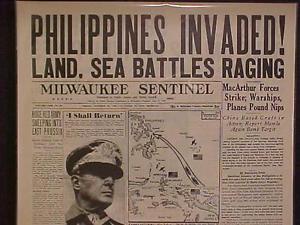 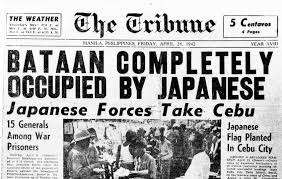 Pearl Harbor changed everything politically inside the United States. It was quickly followed up by the reported atrocities occurring during the invasion of the Philippines(Jan 2, 1942) and the Bataan death march(April 9, 1942).

These events enraged the country, ending America's long history of non-intervention dating back to George Washington's farewell address. Americans forget this today, but in the minds of the American Public of the 1940's, Japan was the primary focus of rage promoting the nation to war, not Germany. Germany was deemed the greater threat, and it saw the bulk of US attention, but it was Japan and the Emperor of Japan specifically who drew the condemnation of the country.

FDR and Churchill agreed that industrialized Germany represented the greater threat and the European war would be fought first. 90% of the United States War materials went to fight Germany. But in the minds of many Americans it was Japan and their unconscionable sneak attack which compelled the nation to respond. FDR and Churchill got extremely lucky that Germany declared war on the United States Dec 11, 1941 and thus along with Japan's attack made that war not a foreign war, but an American war too. This is the logic FDR used to to excuse him from his 1940 pledge.

The reason for the disparity is that the supply of Liberty Bonds was limited. All Five campaigns were not only over subscribed, but sold out quickly.

To avoid a failure to sell the entire bond issue, the government arranged to sell them in a series of brief but intense campaigns by subscription.

Fears of inadequate demand were proved unwarranted. The first loan was oversubscribed by 50 percent, with more than four million subscribers accepted. Nationally, that would represent about one in every six households.

In all, there were four Liberty Loan drives initiated during the war and a fifth “Victory Loan” announced after the armistice. The second Liberty Loan, for $3 billion, was open for six weeks and concluded on November 15, 1917. .... All five campaigns were oversubscribed. Purchasers of the first 3.5 percent bonds could exchange their securities for the new higher-yielding bonds.

When supply is limited, sales will of consequence also be limited. The planning of the five bond drives (including the final one of Victory Bonds) was designed in advance to raise a specified sum, which it did splendidly.