How did people in the desert stay cool in the past?

Putting on layers of clothing, building insulated shelters or simply lighting a fire are some simple yet effective ways of staying warm. Humans have shown they are quite adept at keeping themselves warm, even surviving through the last major ice age some 11,700 years ago.

Eventually, the Earth started to warm up and humans found themselves nearly everywhere. When you think of the hottest places on Earth, you would picture a desert. The largest of the hot deserts is the Sahara with average temperatures reaching around 45°C or 113°F. The Sahara is so large it covers 10 countries, one of the most ancient being Egypt which has been around since 3000 BC. As seen below, there are depictions of servants wielding fans, though most likely only the nobility would have this luxury. Undoubtedly Egypt was warm and it would be a few thousand years before the invention of electric fans and air condition. So how did everyone in those times fight the heat and stay cool?

Homo sapiens evolved near the equator so have always had to deal with hot temperatures. There are a lot of articles about how people stayed cool in the days before air conditioning:

Ancient Egyptians kept cool by using, among other things,

Note: The Ancient Egyptians mostly lived along the Nile rather than in the desert which, as today, was largely uninhabited.

The sun-dried mud bricks, known as djebat, were used to build walls that were then covered with mud plaster and decorated in white or soft colors. The brick walls were well suited to Egypt’s climate as they kept homes cool in the summer and warm in the winter.

Windows were small squares, set high up in order to mitigate the stifling summer heat and prevent dust, glare and flies from entering the house. Windows were arranged opposite each other to allow a cross draft or breeze to filter through; vents in the roof also permitted air to circulate. Loosely woven matting was used as a window shade to stifle the heat and the glare of the sun.

...people hung damp reeds over windows and placed water-filled pots in hallways. As the water evaporated, it would cool the air.

lived in one-room huts under roofs made of reeds, straw and grass. Roofs also served as sleeping quarters on hot summer nights...

Nights can actually get fairly chilly in and around the desert (when travelling in Mali on the edge of the Sahara, I slept on rooftops a couple of times; by midnight, a blanket was needed).

Although fashion and status also determined the way people dressed,

In accordance with the temperature, the Egyptians devised simple styles and comfortable materials in which to dress from the earliest eras. Cotton was a major crop put to good use, and linen, especially the special material called BYSSUS, became the basis for clothing for upper classes.

The masses mostly wore light garments as the last you want in a hot climate is anything heavy. Clothing was simple for the poor:

During the hot summer months, slaves, reed gatherers, brickmakers, fishermen, boatmen and children wore little or no clothing at all. Nudity was not a problem, in those days.

Linen was the fabric of choice, because of its light, airy quality and ease in mobility.

A piece of cloth was sometimes used to cover the head to protect against the sun. 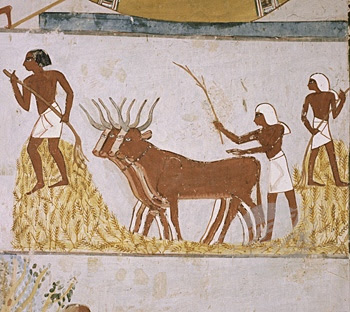 The use of a headrest not only ensured a relatively comfortable position while sleeping, but also enabled air to circulate around the head, an added advantage in a warm climate like that of Egypt.

Some headrests were made of wood, but the poor often used stone. These were also used in other regions around the Sahara:

In neighbouring Libya headrests were also found among the Garamantes who ruled the Fezzan between 500 BC and AD 700. In Mali, they were present among the Tellem, from the eleventh to fourteenth centuries AD, and...Dogons, until the twentieth century. Nineteenth-century headrests belonging to the Bicharin and the Ababds in Nubia still present forms similar to those of their ancient counterparts,... 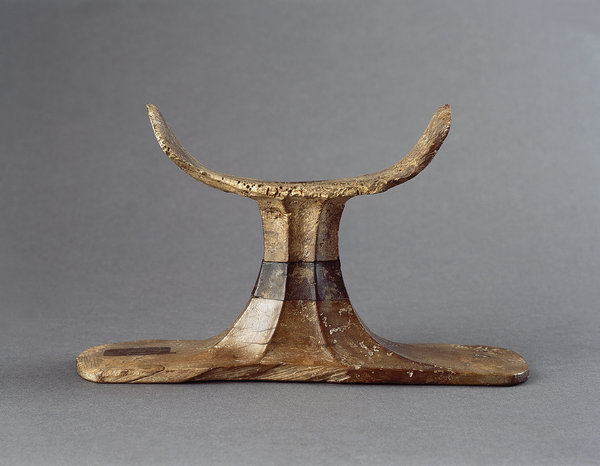 A number of websites, such as this one, also note the use of a wet blanket to stay cool at night. People

wrapped the blankets around their bodies and went to sleep. Throughout the night, the heat caused the water to evaporate off the blankets, keeping the person inside nice and cool.

Ancient Egyptians and others living in and around the desert would also undoubtedly have done many of the things which their modern counterparts do, such as cooling off in the Nile (or the Niger etc.) and taking advantage of whatever shade there was from trees (wealthy Egyptians sometimes had fine gardens with tree-lined paths and running water). Even so, religious ceremonies were often held out in the sun, and Egyptians were evidently not unused to it:

Many ceremonies were held in the open sunlight, a custom that brought about complaints from foreign dignitaries. These ambassadors and legates from other lands attended the ceremonies in honor of Aten and suffered heatstrokes as a result.

A. R. David, The Pyramid Builders of Ancient Egypt

Not the answer you're looking for? Browse other questions tagged everyday-life climate people or ask your own question.