How did the Allies deliver the Moscow Declaration to the Nazis?

On the 1st November 1943, the Allies published the Moscow Declaration 'Declaration on German Atrocities in Occupied Europe' to give 'full warning' to the Nazis that when the war ended the Allies intended to 'pursue them to the uttermost ends of the earth ... in order that justice may be done.'

Q. How was this declaration delivered to the Nazis given that they were already in the midst of a war?

There was communication between the sides via neutral countries. The concept of the "Protecting Power" is important here: When states break off diplomatic relations, they appoint some other state to look after their diplomatic property and provide a channel for communications.

Source: A rather good reddit thread, quoting an article on the website of the International Red Cross.

Q. How did the Allies deliver the Moscow Declaration to the Nazis?

Without formal diplomatic channels for a direct communiqué, the Western Allies delivered the message indirectly, while the Soviets found a more direct method of delivery...

The Western allied powers published the declaration in the public press (freely available to Axis spies in the UK and the US who could then easily transmit this back to their contacts in the Third Reich). The Axis powers also monitored the Allied news reports to glean intelligence from them (newspapers and newsreels were available through foreign offices and agents in neutral nations as well as embedded in the US and UK). 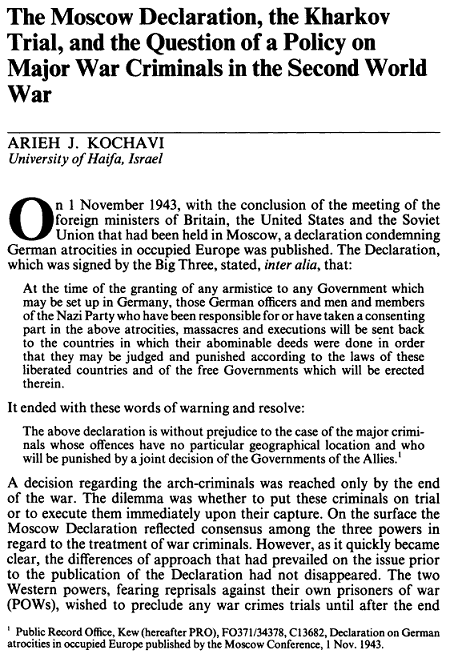 As proof that the Moscow Declaration was published, I found these three New York Times archived articles from 1943:

A basic search of the British Newspaper Archive turned up several results (many of which do not apply, but several indicate publishing various articles about the declarations from 1943 through the end of the war, and after):

The Soviets "delivered" the declaration in a spectacular and unmistakable fashion. In December 1943, one month after the Allies agreed to the Moscow Declaration, the Soviets conducted the Kharkov Trial in which three Germans and one Russian collaborator were tried, convicted, and publicly hanged the next day. According to the Wiki report:

The tribunal heard the case against four defendants, one Soviet collaborator and three Germans, members of the Wehrmacht, police, and SS forces, respectively. They were charged both under the Soviet and international law, the Moscow Declarations. The defendants were accused in participating in the murders of Soviet citizens, while the collaborator was charged with treason. [emphasis added]

Before a crowd of 40,000 the 3 Germans and one Russian, who were convicted by a military tribunal of having taken part in mass extermination of Soviet citizens, were hanged in the snow-covered public square in Kharkov yesterday.

The condemned men were Reinhardt Retzlav, 36, of the German field police; Hans Ritz, 24, formerly assistant commander of Gestapo in Kharkov; Capt Wilhelm Langheld, 52, of the German military secret service; and Michel Bulanov, a Russian who served the Germans as a motor-driver.

Foreign correspondents who had been flown from Moscow to see the conclusion of the trial, saw the execution...

12
When and how did the term “Nazi” start replacing the term “Germans” in the context of WW2?
3
When and how were the Germans made aware of the Moscow Declaration On Atrocities?

18
Have Germany and Poland ever signed a peace treaty after WWII?
10
How were middle ranking Nazis known to the allies before the end of the war?
18
How did the Allies communicate during World War II?
9
How many non-jews did Nazis kill?
6
How did Kolmogorov help protect Moscow in WW2?
12
Where and how did the allies scrounge enough food for the Soviets AND the British?
13
Did Peron shelter Nazis after WWII?
23
How did the Allies achieve air superiority on Sicily?
5
What was the strategic importance of Moscow to the Soviet Union in Dec 1941?