I'm interested in the design of illuminated traffic lights (for automobiles) in the USSR, especially the old history.

Anyway, I'm interested in the design details. Did they use green, yellow, and red for the same purposes, or some different colors? Did they hang vertically in the same order, or some other pattern, or horizontally? Did they have a circle shape, or something different?

The electrically illuminated sinals came only after Lenin. Before the lights went on, they used old style semaphores: 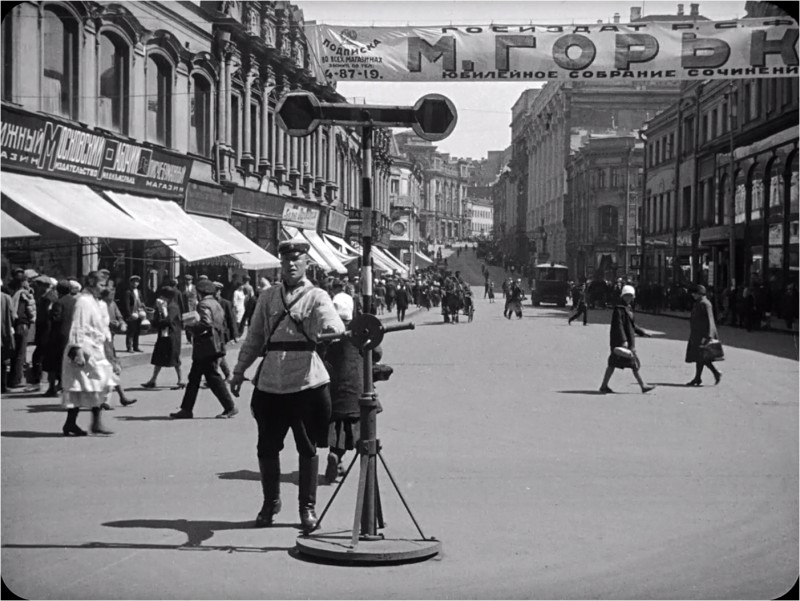 In the USSR, the first traffic light was installed in Moscow on December 30, 1930 at the corner of Petrovka Street and Kuznetsky Bridge. In Leningrad (now St. Petersburg) it happened in the early 1930s. One of the newspapers of Leningrad wrote in December 1929: "The State Automobile Inspection of Leningrad plans to install the first 'semaphore' at the intersection of 25 October and Volodarsky Avenues in January 1930. The semaphore should have had only one signal - red. But this intention remained on paper. The formation of the traffic signaling system took place gradually, the traffic lights differed even in the two capitals, not to mention the regions (for example, one time in Moscow the green signal was at the top and in Leningrad - at the bottom). By the way, in the cities of the USSR, the signals given by a policeman and regulator without a staff (before 1939), a hand pulled in a white glove, were also different. These facts are confirmed by the "Rules of movement... on the roads of the USSR" published in 1936. The experimental variants were also used (the device with manual control of Katznelson's system was made in 2 copies - for Moscow and Leningrad). Until 1959, the red and green colors were on the opposite places to the present ones, then the USSR joined the International Convention on Road Traffic and the Protocol on Road Signs and Signals. Earlier, the original upper blue one was replaced by the upper green one.

In the 1960s, special pedestrian traffic lights appeared. Initially they had a rectangular shape with two sections with lamps, where the word "stop" was written on the glass with red letters, and the green "go", in particular, such a traffic light can be seen in Leonid Gaidai's comedy "Operation Y and other adventures of Shurik", in the novel "Navigation". By the end of the 1970s, such pedestrian traffic lights were replaced by the usual today with "little men". The traffic lights themselves have also changed over the past seven decades. Initially, they were managed by ORUD's employees (later the traffic police) at intersections, in special post boxes, which is described in the poems of Sergei Mikhalkov about "Uncle Stepa", as well as in the feature film "The Street is full of surprises. By the 1970s, a centralized system of automatic traffic lights control was introduced, which allowed to make the so-called green wave. At the same time, it was also possible to adjust the traffic lights by pedestrians themselves. For this purpose, near the adjustable pedestrian crossing, remotes with a button were installed. Pressing those it was possible to switch the traffic light for pedestrians to the green signal, and the traffic light for transport, respectively, to the red one. Also, initially the traffic lights were not installed on all city streets, but only on the central streets, with the busiest and most intense traffic. However, gradually, with increasing traffic flow the number of traffic lights began to grow.

As for the images, some interesting configurtions were installed: 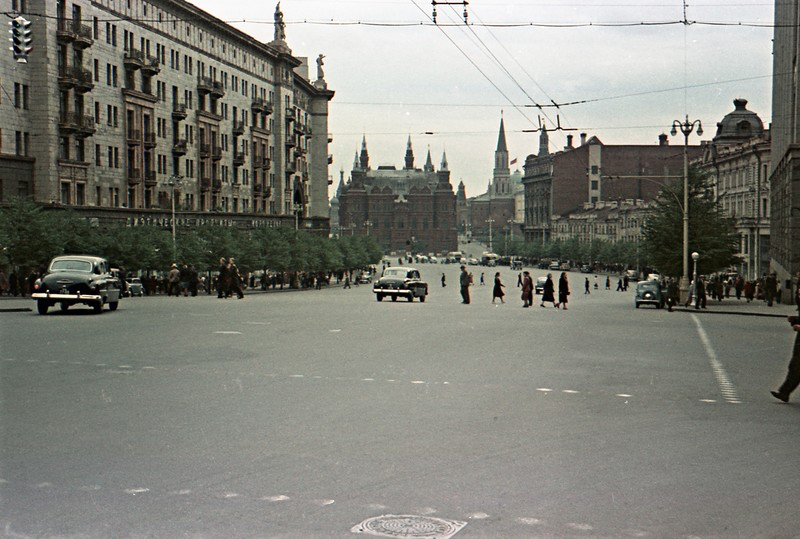 Alexey Dedushkin: When one green signal was turned on, movement was allowed straight and to the right, and two green signals were allowed to go straight, right and left. They were replaced by the familiar traffic lights with arrows for turning.

The first traffic light in Perm.

Installed at the intersection of Lenin and Karl Marx streets (now - Sibirskaya Street). This corner was due to the intersection of two tram lines considered the most alert and busy, and accidents constantly happened. There in 1956 they installed the first traffic light in the city. Первый светофор в Перми 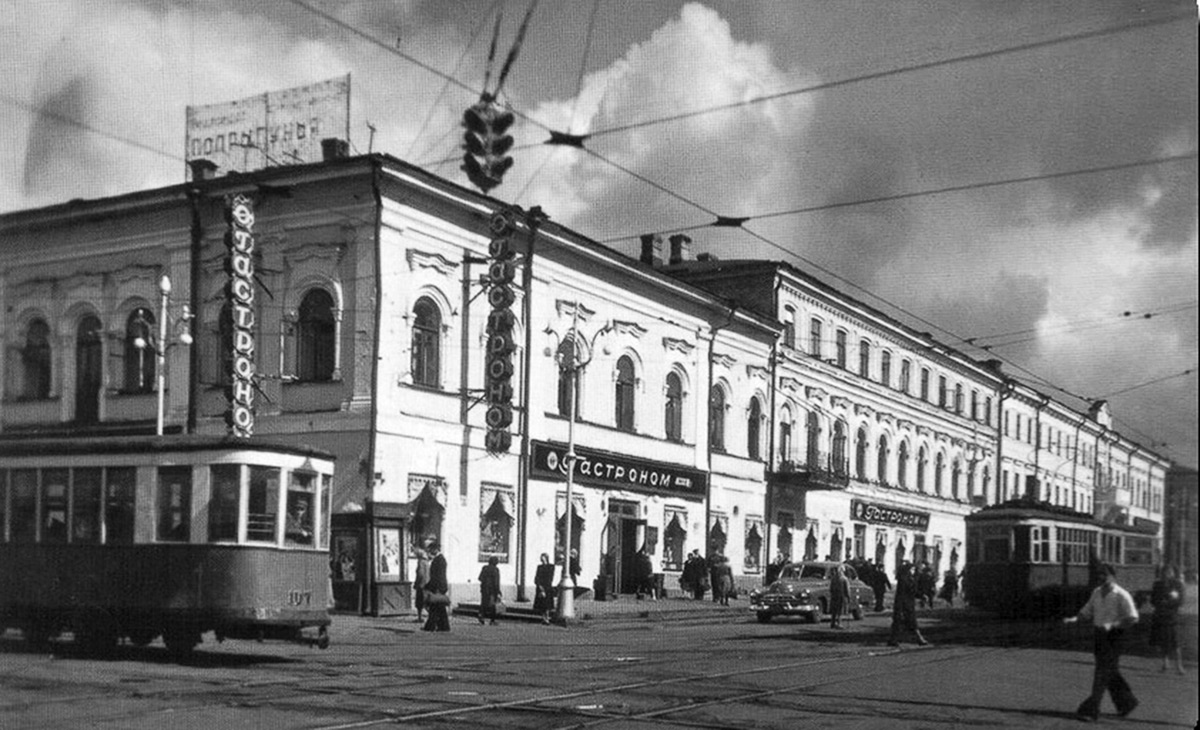 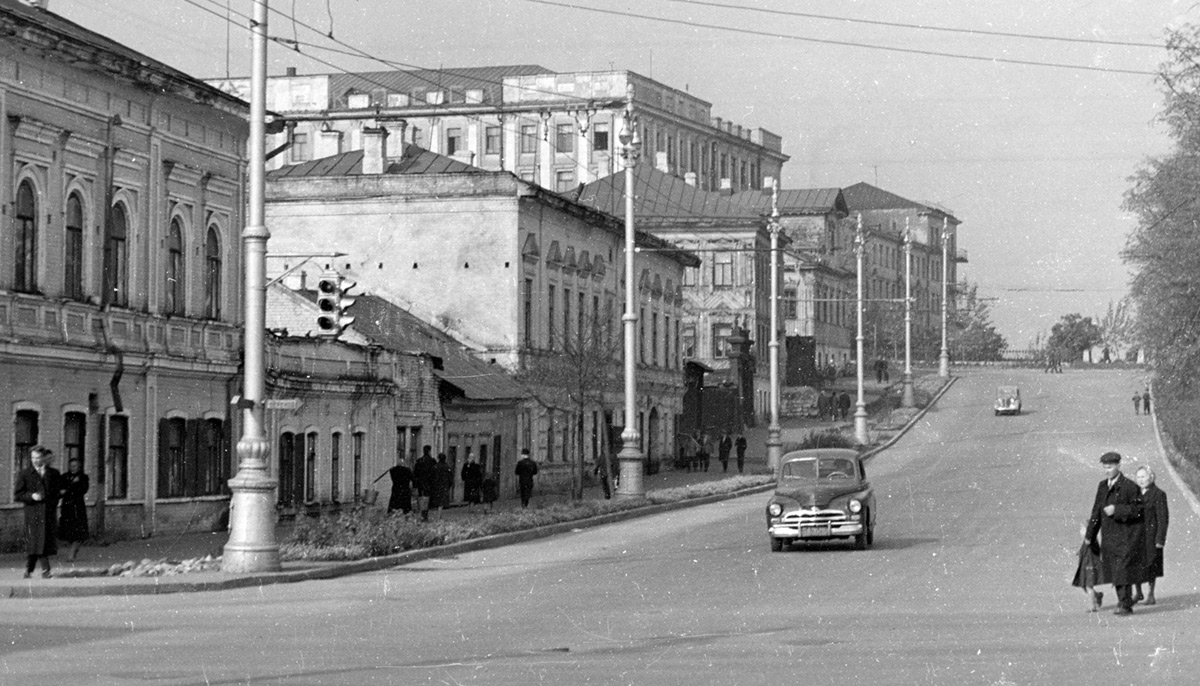 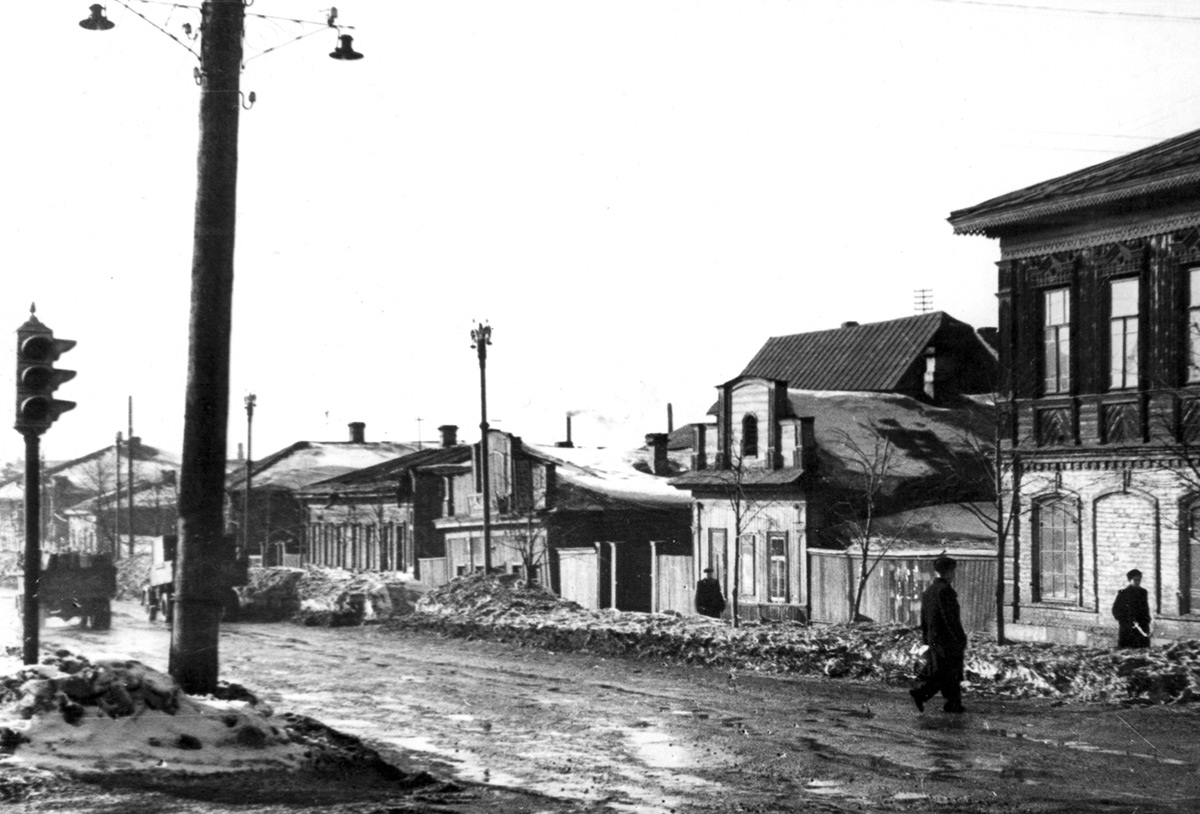 But in Moscow they were of course a bit faster introducing those devices:

Later, in 1932, the same traffic light was installed at the intersection of Kuznetsky Most and Neglinnaya streets. 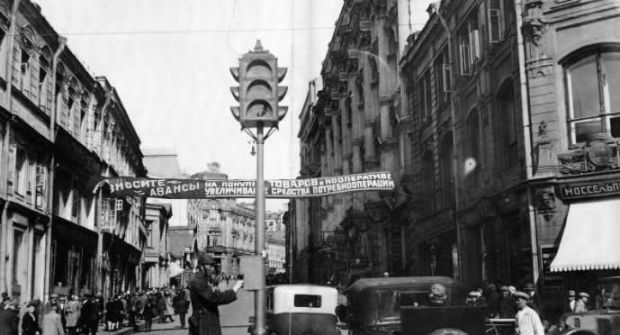 According to other sources, in our country the first traffic light appeared in 1929 in Moscow. It was like a round watch with three sectors - red, yellow and green. And the traffic controller manually turned the arrow, setting it to the desired color. When changing colors was provided for the sound signal emitted by the traffic controller with a whistle. Then in Moscow and Leningrad (as St. Petersburg was then called) electric traffic lights appeared with three sections of the modern type.

It seems that the difference in the dates of appearance of the first traffic lights is connected with this - in 1929 a traffic light appeared with manual switching, and a year later - automatic. 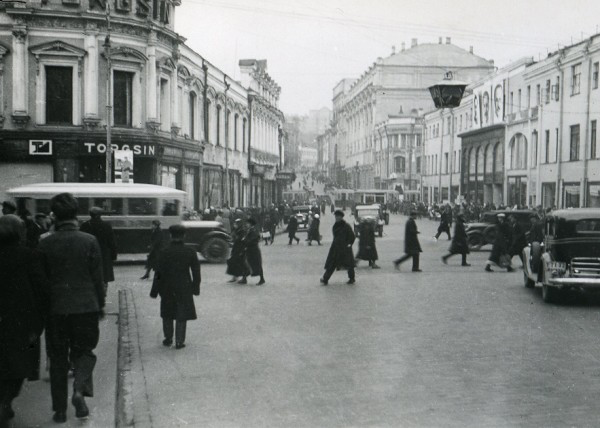 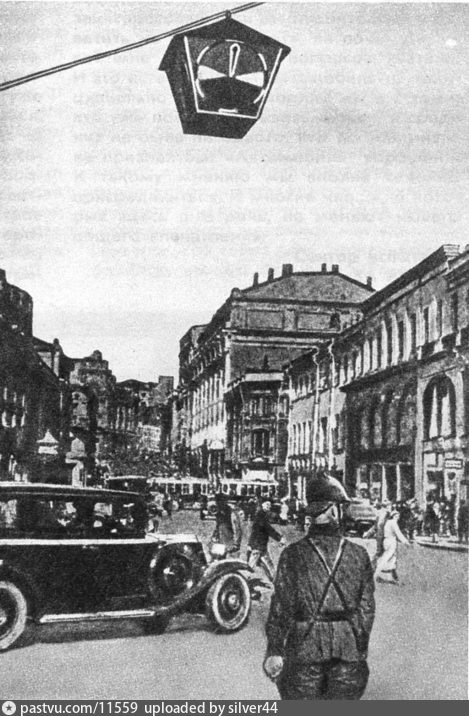 From the same page: 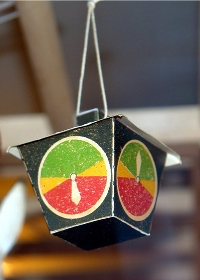 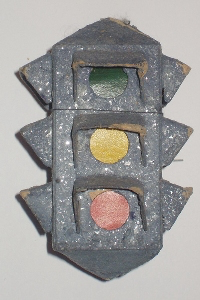 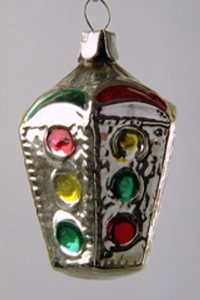 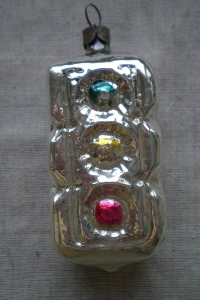 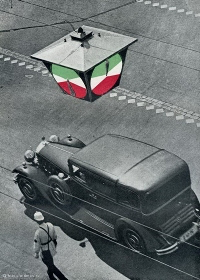 And a weird configuration: 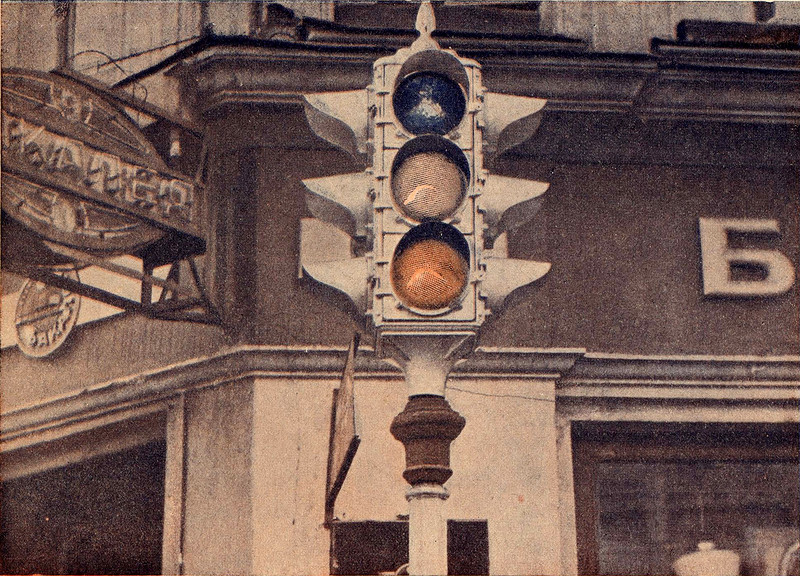 Commenst on that page: Then more colors went "in reverse order." I read about it; but now I saw it with my own eyes. // Yes. Until the late 1950s. // blue-white-yellow // Until the end of the 50s, green and red were in opposite places.

As of at least 1986 or about, all traffic lights were pretty similar to what we currently see in the Western world, red being on the top (with the meaning "stop/wait), yellow in the middle ("prepare/do not proceed") and green at the bottom ("proceed"). Lights for pedestrians, initially not very common, only had red on the top and green at the bottom. Human figures on these lights appeared only later.

Holding the Soviet driving license, I can also tell that it was permitted to proceed under yellow light if it has just changed into yellow from red and you are unable to stop easily. This permission possibly predates the time when flashing green was introduced, reducing the possibility of the unexpected signal change. To eliminate the confusion further, red and yellow were sometimes lighted together on the side after the red (it is forbidden to proceed now but expect the signals to change soon). It was important to warn the drivers in advance as the gear switching was mostly manual.

Arrow on the green light indicated the allowed direction of traveling (arrow to the left also permitted turning around). Arrows on the green and red lights where not so specific; they just indicated the direction that will be allowed after the signal changes into green. While arrows on red and yellow lights were documented in the rules, I have never seen such a traffic lights in reality.

Finally, a single blinking yellow light was used for general warning and used to be quite frequent in busy but unregulated pedestrian crossings at one time, predating the red/green light. Two blinking red lights were used on railway crossings.

The rules also describe separate traffic lights for trams (four white-green lights placed in a T shape) and lights for reversible traffic. I have never seen these.

The source of this explanation would be the road traffic rules of the Soviet Union.

Not the answer you're looking for? Browse other questions tagged 20th-century soviet-union or ask your own question.

12
What is the difference between NKVD and OGPU (USSR)
65
Why did the USSR give Crimea to Ukraine?
5
Were there in the USSR monasteries decorated with Soviet orders?
6
What happened to schizophrenics in the USSR?
13
Were major foreign films allowed in the USSR?
4
What is this SSR of the USSR in 1923?
19
What happened to all the nuclear material being smuggled after the fall of the USSR?
5
How were USSR oblasts and cities governed?
1
How important were social justice issues in dissident circles in the late USSR?