In Wim Wenders' 1987 film “Der Himmel über Berlin” (released in English as “Wings of Desire”), several scenes are shot at Potsdamer Platz, then a big empty divided square. In some of those scenes, some kind of bridge or elevated walkway is visible in the background, on which people can be seen walking. Did this exist? If so, what was it? I can't find such a bridge or walkway on historical Potsdamer Platz photos on Wikimedia Commons, so it may be Wenders' artistic freedom, but it doesn't play any role in the story, so I can't see why he would have chosen to edit it in, which makes me think it may have been real. Was it?

It has to be this picture, or better scene (video clip), from Wings of Desire: 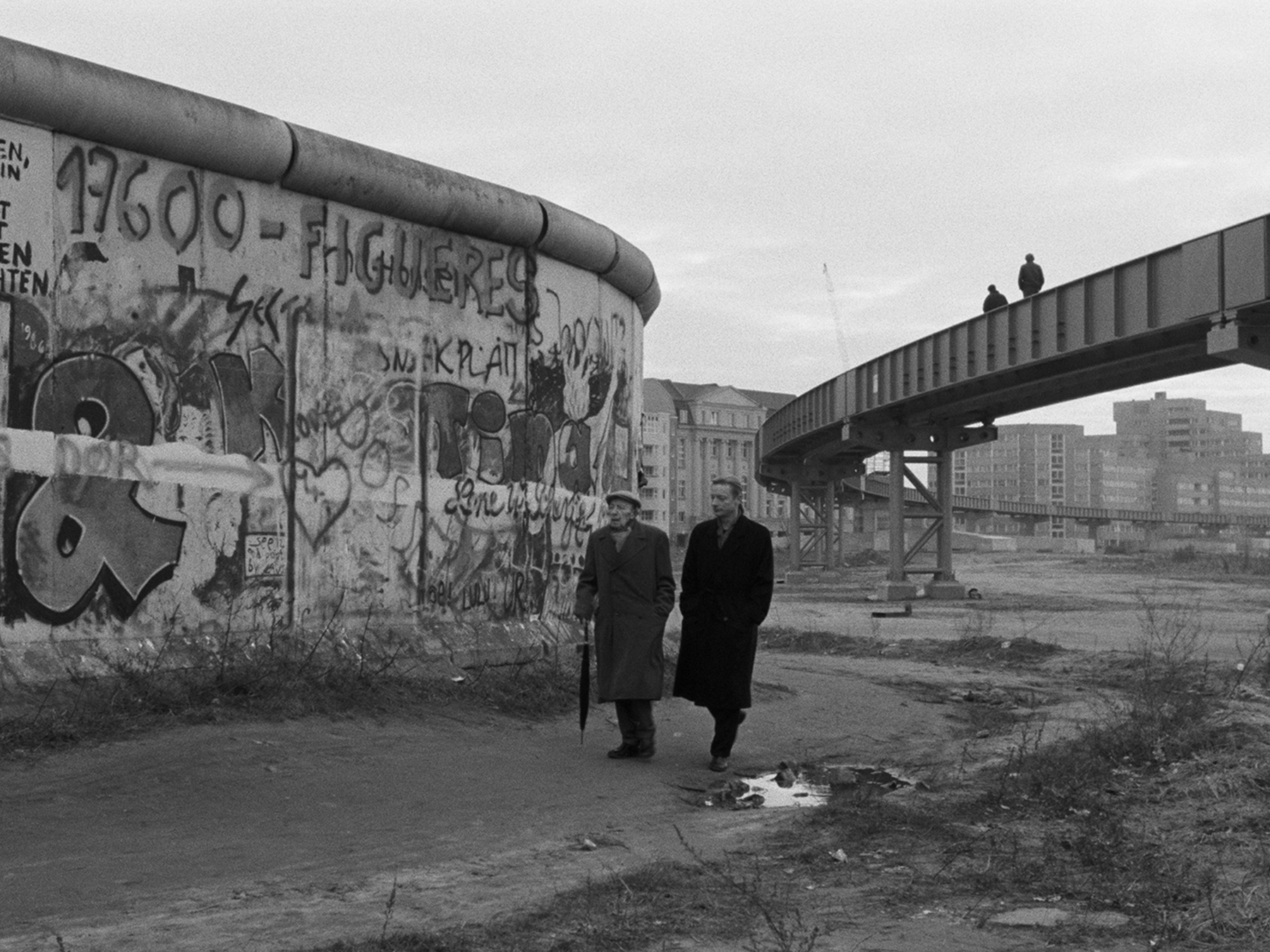 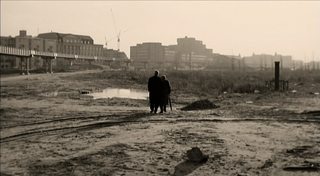 But then we have a certain problem:

Filming took place at actual locations in West Berlin, such as Hans Scharoun's Berlin State Library, though the Wall was recreated in studio, due to shooting the true Wall being outlawed. Some pieces of the recreation were made from inexpensive wood, with one being destroyed by rain during production.

In one scene, Damiel and Cassiel meet to share stories in their observations, with their function revealed to be one of preserving the past. Professor Alexander Graf wrote this connects them to cinema, with Wenders noting Wings of Desire itself depicts or shows places in Berlin that have since been destroyed or altered, including a bridge, Potsdamer Platz and the Wall.
WP: Wings of Desire

Damiel accompanies the elderly Homer (Curt Bois) as he ambles around the empty, muddy wasteland alongside the Wall that was Potsdamer Platz, which Homer remembers from the 30s as the busy heart of the city. There's next to nothing you could recognise today, with Potsdamer Platz once again a glittering centre, dominated by the extravagant Sony Centre.

First, claiming that filming the wall was prohibited is clearly bogus, if it is meant to be applied to the Western side.
It is therefore not entirely without contradictions from the above if one finds these pictures then: 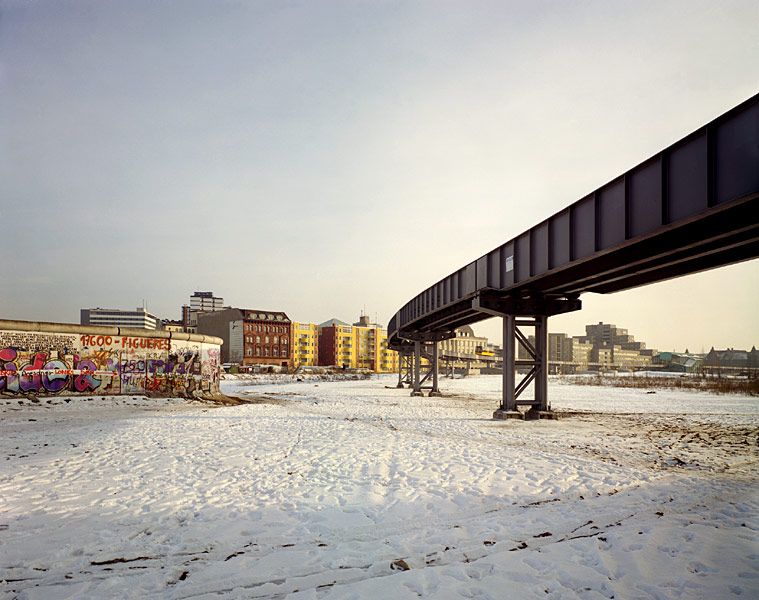 That is almost identical to the camera view from Wings of Desire. Even the text and murals on the wall are largely an identical match.

In this shot you only need to insert the actors, as even the weather seems to match (although the date seems to be a bit off for the movie, but the exact paintings are also slightly different): 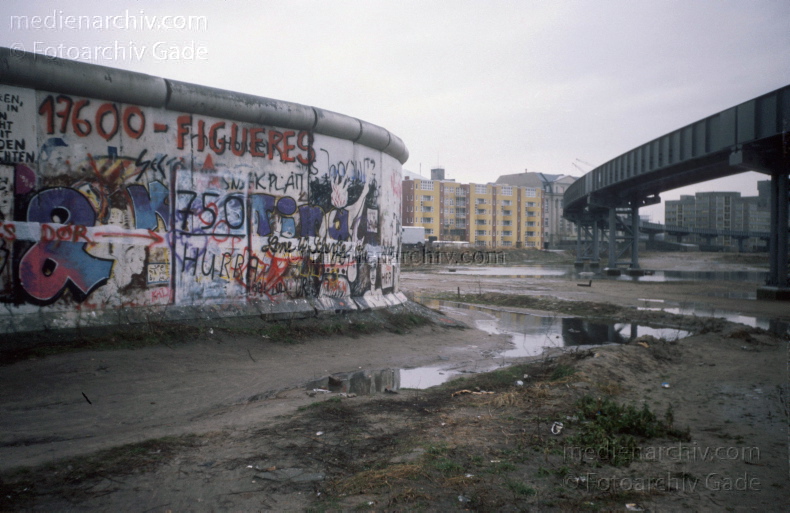 Bildname: Germany-Berlin-Mitte-Mauer-1980-83, 1980. Deutschland. DDR. Berlin. Berliner Mauer. Potsdamer Platz. Magnetschwebebahn. Foto: Hellmut Münzner © Fotoarchiv Thomas Gade (Note that the photographer is certainly wrong in dating his own work to 80–83. There is a protest graffito against something: "750 Hurra", which is opposing the bruhaha of 750 Jahre Berlin. Those year-long festivities were opposed by certain groups for some time before, but took place in 1987… Equally that protext graffito is alos in the wider shot from Rose dated to 1987. Contruction of the tracks aso only started in 1983, on a different section, thus claiming "1980" for this picture is really impossible.)

If that is really just a tram bridge, then especially the smallish tracks seen in the movie still seem to indicate that the people visible on them might be illegally walking there. Or had special permissions for filming. Usually the structure was not meant for people walking at all, and there was just not much space to do so on it.

But the structure seems to have been there in 1987 when the film was shot. The M-Bahn or Magnetbahn was an elevated Maglev train line operating in Berlin, Germany from 1989 to 1991. 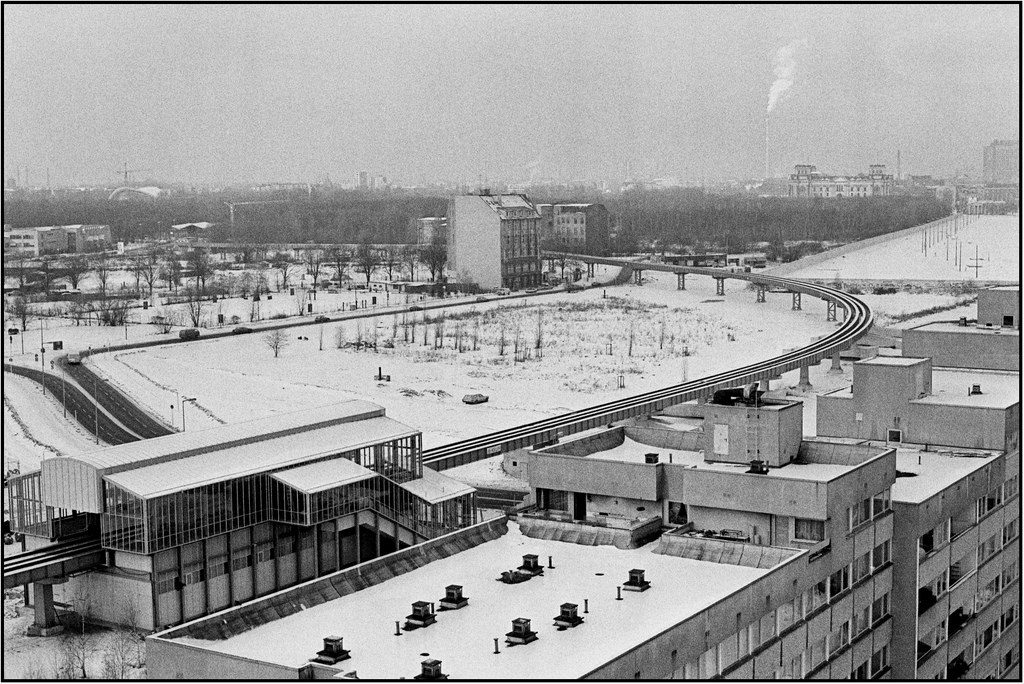 This seems to be almost directly opposing shot, like capturing the place of the cinematic camera position. 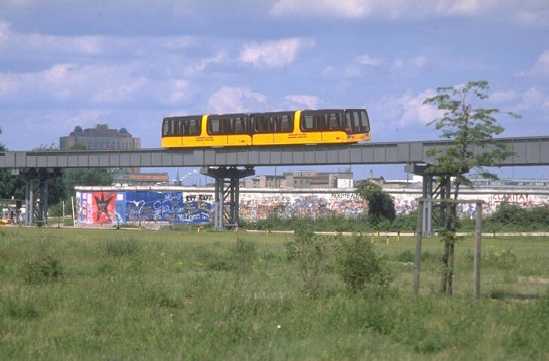 This image to show the size of the tracks compared to the vehicles and that in no way were these tracks meant to be walked on.

The train line touching Potsdamer Platz on a modern map:

This is confirmed in an interview with the director himself:

(How we shot it one Sunday morning on Potsdamer Platz, at the Wall, under the magnetic train that was still driving along it. Nobody far and wide. That was a city desert, a steppe, a no man's land. The sun was shining, but it was still cold.)

Interpreting this scene is then the subject of

One could easily visualize their further decay. This dreary sight led me to some thoughts which I later propounded to Hitler under the pretentious heading of “A Theory of Ruin Value.” The idea was that buildings of modern construction were poorly suited to form the “bridge of tradition” to future genera- tions which Hitler was calling for. It was hard to imagine that rusting heaps of rubble could communicate these heroic inspirations which Hitler admired in monuments of the past. My “theory” was intended to deal with this dilemma.

This film is usually quite re-interpreted now in German media. Especially the scenes around that very place which was most heavily re-developed is a quite peculiar focus of attention. Finally a video clip filmed apparently from the tracks down onto the place of the movie scene.(clip ~one minute after the link points to.).

Not the answer you're looking for? Browse other questions tagged germany berlin-wall or ask your own question.