Did anyone face consequences (charges / court-martial) for the 1914 Christmas truce in WWI? 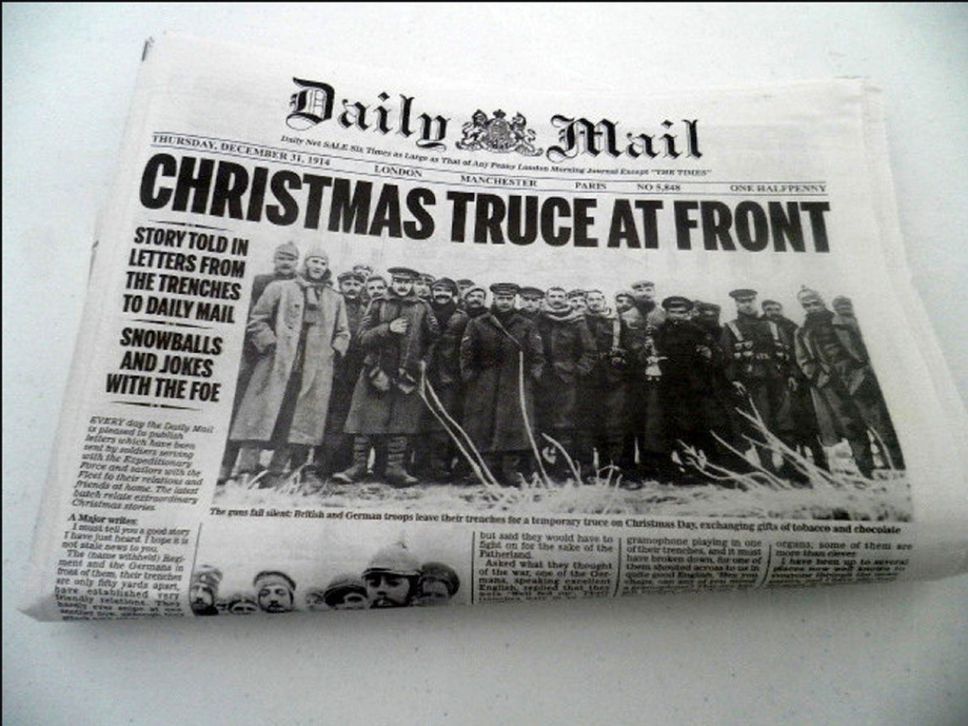 A copy of the Daily Mail from Dec. 31, 1914 reports on the Christmas truce. Source: The Star

As a follow-up to this question about impromptu football / soccer games between troops from opposite trenches during the Christmas truce of 1914, were any officers or men brought up on charges as a result of the unofficial truce and fraternization?

British commanders had early on recognized the potential for fraternization in 1914, and had issued warnings and orders against fraternization with the enemy:

It was natural for each side to wonder about the men living so close them who endured the same wretched cold and wet conditions, and who faced the same prospect of an early death. The top brass recognized the danger this curiosity posed to military order. On December 5, 1914, British General Sir Horace Smith-Dorrien sent a warning to the commanders of all divisions: “Experience ... proves undoubtedly that troops in trenches in close proximity to the enemy slide very easily, if permitted to do so, into a ‘live and let live’ theory of life...officers and men sink into a military lethargy from which it is difficult to arouse them when the moment for great sacrifices again arises.” ...

By the time Christmas Eve arrived, so much interaction had occurred between the British and Germans that Brigadier General G.T. Forrestier-Walker had officially forbidden fraternization. In his book A Century of War: Lincoln, Wilson, and Roosevelt, Judge John V. Denson quoted the directive. Fraternization “discourages initiative in commanders, and destroys offensive spirit in all ranks. ... Friendly intercourse with the enemy, unofficial armistices and exchange of tobacco and other comforts, however tempting and occasionally amusing they may be, are absolutely prohibited.”

After quoting Forrestier-Walker's order in his book (see above), John V. Denson goes on to say:

Later strict orders were issued that any fraternization would result in a court-martial.

Thus, it seems plain some of the British commanders recognized the possibility of fraternization and had issued explicit orders against any such camaraderie. What does not seem plain is whether those orders were backed up with disciplinary action of any kind when those orders were disobeyed during the impromptu Christmas truce of 1914.

The only record of a court-martial I can find is this case of Captain Iain Colquhoun which took place as a result of a lesser Christmas truce a year later in 1915:

On Dec. 25, 1915, the 28-year-old Colquhoun had written in his diary: “A German officer came forward and asked me for a truce for Christmas. I replied that this was impossible. He then asked for three quarters of an hour to bury his dead. I agreed.

“Our men and the Germans then talked and exchanged cigars, cigarettes etc for quarter of an hour and when the time was up I blew a whistle and both sides returned to their trenches.

“For the rest of the day ... not a shot was fired. At night, the Germans put up fairy lights ... and their trenches were outlined for miles ... It was a mild looking night with clouds and a full moon and the prettiest sight I have ever seen. Our machineguns played on them and the lights were removed.”

After another 10 days on the front line near Lille, marked in the diary by shelling and sniping but also drinking and gambling with fellow aristocrats of the Guards Division, Colquhoun returned to a billet in the rear to find himself under arrest.

Charged with conduct to the prejudice of good order and of military discipline for “approving of a truce with the enemy”, his five-hour trial on Jan. 17, 1916, heard evidence in person from General Douglas Haig, the British supreme commander.

Found guilty, Colquhoun escaped, however, with a reprimand. [Source: Reuters]

I have not been able to find any record of charges or courts-martial for any officers or men as a result of the previous 1914 truce. But I have very limited abilities to be able to perform any searches in French or German terms so there may be readily available cases that my English searches have simply not turned up. Was anyone charged (even if perhaps not tried, or even perhaps tried but acquitted) on any side for the unofficial and unauthorized 1914 Christmas truce?

On the British side, no one was court-martialed. This also appears to be true for the French, Belgians and Germans.

French and Belgian participation in the Christmas truce was, in any case, very limited, and there was no truce on the Eastern Front (as cipricus notes in a comment, Russian Christmas is in January). Turkish troops actually upped their attacks on the (Christian) allies over the Christmas period.

One of the sources cited here (Crocker) has a lengthy bibliography of primary and secondary sources (including two books specifically on the Christmas Truce - Brown & Seaton and Weintraub) and concludes that no punishments were meted out on the British side. If there had been any courts martial, it would be very strange that no one even hints at them, especially after mentioning the orders on the future consequences of fraternization.

In a footnote in a University of Kentucky master's thesis (pdf), T.B. Crocker investigated the British side and states:

The only two cases located, either through the exhaustive research of Brown/Seaton and my own explorations in the Imperial War Museum archives, where a soldier could argue that he had suffered punishment for participating in the truce are of one soldier who claimed he had been denied the DSO because a photograph of him singing in the trenches on Christmas had been published in a British paper, and another soldier who was alleged to have been denied leave after his company commander reported he had been involved in a truce, but neither of these allegations constitute official discipline. No soldier was court-martialed for participation in the truce.

Another French source, Combler les trous de la memoire (pdf), apparently referring to all the armies on the Western front (French, Belgian, German and British) says there were no courts-martial:

Translation: The Christmas truce did not result in any courts-martial.

According to this German source, fraternization between German and French soldiers was extremely limited; soldiers were threatened with court martial but there is no mention of any action being taken.

Another German source points out that the fraternizations were mostly limited to Saxon and Bavarian regiments, and that there was no Christmas truce with the Prussians or the Württemberger.

However, it is probably impossible to be certain as to whether or not any German soldiers were court martialed for the Christmas Truce as the "official figure of 48 executions" for the entire war (1914-18) "is vastly underestimated".

Research is... made difficult by the number of records destroyed during the Second World War.

Nonetheless, in commenting on the film Joyeux Noël (2005) on the Christmas truce, Crocker observes that one of the myths that the film promotes is

...that those soldiers who were involved in the event were penalized for their participation...

By this, the author is referring to the (fictionalized) film portraying the French participants as being sent to a "brutal sector of the front", a Scottish troop being disbanded and the Germans as being sent to the Eastern front.

Note: According to Brown and Seaton, cited by Crocker, when Iain Colquhoun was charged with the "approving of a truce with the enemy" during Christmas 1915, it was General Haig who remitted sentence, though how much this was due to the Prime Minister (Asquith, with whom Colquhoun was connected by marriage) is open to debate.

Not the answer you're looking for? Browse other questions tagged world-war-one france united-kingdom imperial-germany christmas or ask your own question.

40
In the "Christmas truce" of 1914 were there any football (soccer) matches between British and German troops?
23
The WWI Christmas truce of 1914 resulted in no consequences, in spite of clear warnings against such beforehand - why were there no courts-martial?

11
What was the actual cause of the disaster for the Royal Navy’s battlecruisers in the Battle of Jutland?
27
Was there any practical use for German spiked helmets (Pickelhaube)?
2
Need song or quote from Christmas Truce of 1914
6
Was WW1's extended static slaughter caused by bad leadership?
7
Can anyone confirm the identity of these WWI uniforms?
40
In the "Christmas truce" of 1914 were there any football (soccer) matches between British and German troops?
23
The WWI Christmas truce of 1914 resulted in no consequences, in spite of clear warnings against such beforehand - why were there no courts-martial?
1
How did an advancing force walk during WW1?
10
Were union disputes the only reason for low female employment in WWI German factories?