Was there any distinction between the 13 Colonies and the Canadian provinces prior to the American Revolution?

Was there any distinction between the 13 Colonies that became the United States and the Canadian colonies/provinces prior to the American Revolution? For example, did New Brunswick and New Hampshire have the same status within the British empire?

From the American Declaration of Independence:

He has combined with others to subject us to a jurisdiction foreign to our constitution, and unacknowledged by our laws; giving his Assent to their Acts of pretended Legislation;
...
For abolishing the free System of English Laws in a neighbouring Province, establishing therein an Arbitrary government, and enlarging its Boundaries so as to render it at once an example and fit instrument for introducing the same absolute rule into these Colonies;

These two of the "repeated injuries and usurpations" refer explicitly to the special status of the Province of Quebec and les Habitants Canadiens inhabiting it, including relief for adherents of Roman Catholicism and (within broad limits) the retention of French Civil Law in place of English Common Law.

Note that the Province of Quebec from 1763 to 1783 included all territories north of the Ohio River and east of the Mississippi River, including all of the modern states of Wisconsin, Illinois, Indiana, Ohio, and Michigan, as well as modern Southern Ontario: 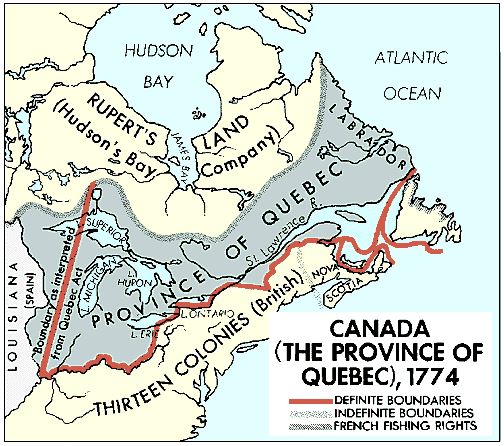 Also the modern Province of New Brunswick was part of the colony of Nova Scotia until 1784, when it separated following the arrival of over 10,000 United Empire Loyalists from elsewhere in the Thirteen Colonies.

Not the answer you're looking for? Browse other questions tagged united-states colonial-america american-revolution canada or ask your own question.