Did the founding members of the Black Panthers ever mention the role of Malcolm X in creating their group?

I'm trying to find out if the Black Panther Party (BPP) ever said (preferably in an interview of some kind) whether Malcolm X or the Nation of Islam's more active approach to civil rights helped to inspire the creation of their party.

Both of the party's founders Bobby Seale and Huey P. Newton were inspired and influenced by the 'post-Nation of Islam' Malcom X. However, the Black Panther Party (BPP) largely rejected the Nation of Islam's (NOI) approach as they deemed it not active enough (among several other things). Nonetheless, the BPP's initial Ten Point Program bore a close resemblance to that of the Nation of Islam

Bobby Seale's book Seize the Time: The Story of the Black Panther Party mentions Malcolm X numerous times, and leaves little doubt that he was an inspiration. For example, Seale writes:

Malcolm X had advocated armed self-defense against the racist power structure and show the racist white power structure that we intend to use the guns to defend our people. All these cultural nationalists, these underground RAM bastards, all of them, were scared and rejected it....The only people hanging on to it were Huey P. Newton leading it and me

Note: by 'cultural nationalists', Seale was referring to the NOI, among others.

...we wanted these guns to begin to institutionalize and let black people know that we have to defend ourselves as Malcolm X said we must.

The BPP, of course, became notorious for their open displays of weapons and numerous confrontations with the police. It's also worth noting that when the party was founded (in Oct. 1966), it was orginally called the Black Panther Party for Self-Defense

Seale also relates how he "cried like a baby....I was ready to die that day" when he heard Malcolm X had been shot (in Feb 1965). In another passage, Seale says of his co-founder:

Malcolm X talked about organization and doing things, and righteously going out there and doing it. The cultural nationalists, on the other hand, wanted to sit down and articulate bullshit, while Huey P. Newton wanted to go out and implement stuff. 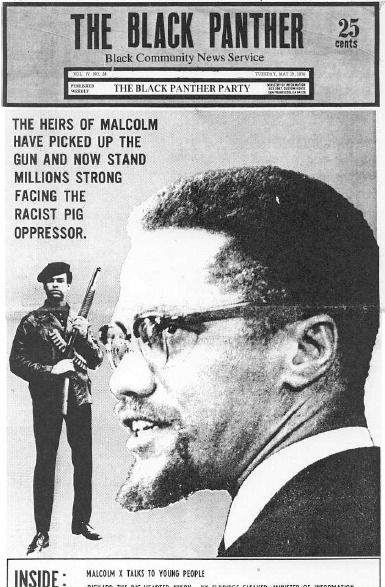 In a 1988 interview, Seale mentioned several influences and stressed the importance of learning, among other things, more about US history:

Huey and I had been involved for some time, off and on, studying Black history, what have you, what Malcolm had done...I was highly influenced by Martin Luther King at first and then later Malcolm X. Largely the Black Panther Party come out of a lot of readings.... And there we were with all this knowledge about our history, our struggle against racism and when we started the Black Panther Party it was more or less based on where Malcolm was coming from, where our struggle was, an argument about the Civil Rights Movement not learning to own property...

Malcolm X was the first political person in this country that I really identified with...We continue to believe that the Black Panther Party exists in the spirit of Malcolm . . . the Party is a living testament to his life and work.

As David Hilliard observes in his introduction to The Huey P. Newton Reader,

Although Huey and co-founder Bobby Seale did not aspire to replicate Malcolm's Organization of Afro-American Unity, the fledgling political entity whose fruition was cut short by his murder in February 1965, Malcolm's teachings were nevertheless fundamental in structuring the Black Panther Party for Self-Defense, as the group was originally named in October 1966.

Malcolm X not the only person who inspired the BPP, though. Mao, Frantz Fanon and Ghanaian President Kwame Nkrumah (among others) also influenced the BPP founders, especially Newton. Books by Malcolm X, Fanon and Nkrumah were at the top of the BPP's required required reading list.

The BPP's leftist orientation and willingness to work with other leftist organizations regardless of race set them very apart from the Nation of Islam. Although the two groups did share some aims, their methods and ideologies were very different. Seale does not mention the NOI even once in Seize the Time.

When at Oakland City College, Newton had heard Malcolm X and Muhammed Ali speak and, while "impressed with the objectives and overall program" of the NOI (of which Malcolm and Ali were then members), rejected the organization. He later explained

By this time, I had had enough of religion and could not bring myself to adopt another one. I needed a more concrete understanding of social conditions. References to God or Allah did not satisfy my stubborn thirst for answers.

Judson L. Jeffries (ed), On the Ground: The Black Panther Party in Communities across America

Malcolm X died in 1965 and the Black Panther Party was founded by Bobby Seale & Huey Newton in late October 1966:

They had actually met in 1962 when they were both students at Merritt College where they joined Donald Warden's Afro-American Association. There they read widely, debated, and organized in an emergent black nationalist tradition inspired by Malcolm X and others. Eventually dissatisfied with Warden's accommodationism, they developed a revolutionary anti-imperialist perspective working with more active and militant groups like the Soul Students Advisory Council and the Revolutionary Action Movement. Their paid jobs running youth service programs at the North Oakland Neighborhood Anti-Poverty Center allowed them to develop a revolutionary nationalist approach to community service, later a key element in the Black Panther Party's "community survival programs."

In an interview conducted by Blackside, Inc. on November 4, 1988, for Washington University Libraries, Film and Media Archive, Henry Hampton Collection:

INTERVIEWER: Okay, I'm trying to put the Panthers in some sort of line with other struggles for, for, for Black freedom. Where did this philosophy of the Panthers come from? How were you influenced by Malcolm X, were you talking about Martin, and Elijah Muhammad?

BOBBY SEALE: Huey and I had been involved for some time, off and on, studying Black history, what have you, what Malcolm had done, where Martin Luther King come from, I was highly influenced by Martin Luther King at first and then later Malcolm X. Largely the Black Panther Party come out of a lot of readings, Huey and I putting scrutiny to everything going on in the United States of America. Like we must have subscribed to 20 some odd different periodicals, off-beat periodicals like the Liberator, Freedom Ways, what have you, even some periodicals out of Africa.

Well we had read and digested Frantz Fanon's The Wretched of the Earth. I mean we knew Lerone Bennett's Before the Mayflower. I knew about the 250 slave revolts that included Gabriel Prosser and Nat Turner and Denmark Vesey. I mean, I, Frederick Douglass, everything, the Nation of Islam, what had happened in the 1930's, what have you and so on. And there we were with all this knowledge about our history, our struggle against racism and when we started the Black Panther Party it was more or less based on where Malcolm was coming from, where our struggle was, an argument about the Civil Rights Movement not learning to own property, and then Stokely Carmichael in 1965, '66 talking about Black Power, and we thought we needed a functional definition of just the word "power" alone.

And we felt that if we defined the phenomenon of a city government framework or institution of government as racist in terms of the institutional racism that we understood from studying that history then it's high time we made that institutionalized political function act in a desired manner. And how do we go about that. So, we had to organize political electoral power we thought, so. This is where we were coming from.

Not the answer you're looking for? Browse other questions tagged united-states 20th-century civil-rights black-history or ask your own question.

11
What were the FBI's motives for wanting to discredit MLK?
8
Did the 'founding fathers' of the United States see Oliver Cromwell as a role model?
10
When did “whites only” signs (racial segregation) become illegal in the USA?
1
Was there a time when George Washington discovered some of his soldiers absolutely refused to swear loyalty and obedience to the Continental Congress?
6
How did desegregation affect the jobs of black school teachers in the South?
8
What was the context of Queen Juliana's “I can't understand it” quote?
6
When (and where) did public polling start taking place on topics other than elections?
0
What was the earliest black advocacy for Palestinian rights?