Why was it Spain, not Tlaxcala, that dominated over Mesoamerica despite the Tlaxcaltecs being the major force in the conquest of Tenochtitlan?

It has been a question that makes me wonder, since the very first time I read about the history of the Aztecs. In the fall of Tenochtitlan, as commonly known, the Tlaxcalans (Tlaxcaltecs) was the major force, accompanied with many indigenous factions (including even factions in the Triple Aliance itself!), summed up to many 100,000s. When compared with the Spanish troops, which had only around 500-1000 men, the Spanish force was very very tiny.

Given the above facts, it is somewhat counterintuitive that, after the fall of Tenochtitlan, Spain instead of Tlaxcala seemed to be the primary dominant power in the territory, and Tlaxcalans played a more passive role (even in the process of the conquest the Tlaxcalans seemed to play a subordinate role to the Spanish, not at an equal status, despite being major force).

Why did the conquest end up this way?

But afterward, the Spanish sent reinforcement of men, and particularly artillery, from Cuba. With these reinforcements, the Spaniards were stronger than the Tlaxcalans, whom they treated as "junior partners."

Tlaxcala was strong enough to be independent of Tenochtitlan and the Triple Alliance, while combating them in the regular "flower wars" which provided sacrificial victims and opportunities for valor. However, unlike the Mexica state, Tlaxcala was not attempting to expand.

As Cortés moved inland, he chose to go through Tlaxcala instead of Cholula at least in part because the latter was a Mexica subject. In Tlaxcala the Spaniards won two battles and successfully defended themselves against a nighttime attack. Tlaxcalan caciques were forced to agree to provide Cortes with soldiers, women, and food. The Tlaxcalans had been able to stay free of the Mexica, but they became subjects of Spain. The nearly contemporary Lienzo de Tlaxcala includes this image of Tlaxcalan King Xicotencatl the Elder receiving Cortés and Malinche as they contemplate their assault on Tenochtitlan: 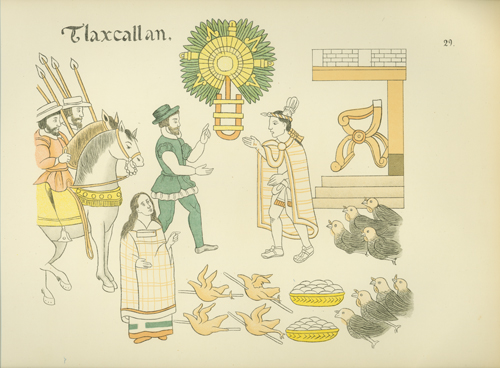 Possibly related to its role as the first native force allied with Spain, Tlaxcala became the seat of Mexico's first bishopric. Some Tlaxcalans were later settlers in the Gran Chichimeca.

Sources: The Forging of the Cosmic Race (MacLachlan & Rodriguez O.); The Discovery and Conquest of Mexico (Diaz del Castillo)

Not the answer you're looking for? Browse other questions tagged spanish-empire mesoamerica aztec or ask your own question.

9
Did native Mexicans prefer Spanish rulers to the Aztecs?

9
Why did not Spain manage to keep any colonial possessions in the new world?
2
What were the major ethnic / cultural / politcal divisions of pre-conquest Mesoamerica?
3
Why did the maize-based society that Spain found in the Central Valley of Mexico not dominate over Europe?