Were smoke signal used to trigger a company-scale infantry advance by the US during WWII?

In the context of WW2, US land forces, any non-Pacific theater (Africa, Italy, Normandy--Germany campaign): Was there a doctrine in place utilizing smoke grenade signals for triggering an infantry advance? And/or, is there a documented example of doing so? By infantry advance, I mean a movement of an infantry unit (up to a company level) towards an enemy position within shooting distance.

To provide a specific example of what I mean by triggering an infantry advance, see this fictional depiction from the HBO show Band of Brothers.

This question was originally inspired by me doubting the delay element in assault in the linked video. Thanks to constructive comments, I've rephrased it to explicitly focus on the element of plausibility from the point of WWII tactics, which I was after anyway.

This video steps through WW2-era U.S. infantry tactical doctrine at the squad level, assembled from several contemporary manuals. In describing the final assault (@ ~22:10) on an enemy position (top centre) it outlines how smoke might be used to signal the fire shift by the base group (bottom right) from 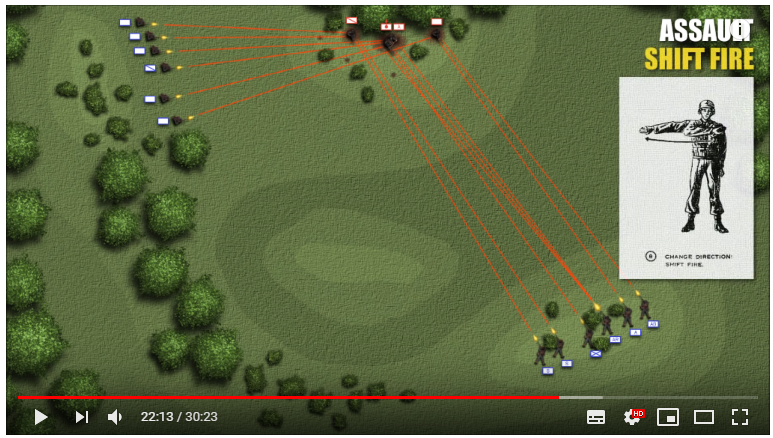 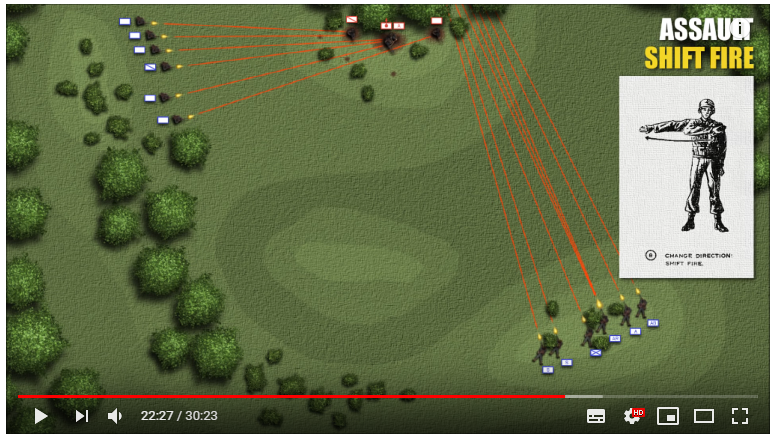 for protection of the assault group (top left) as it closed. Implied but not explicitly stated is the expectation that the enemy would not properly recognize and respond to the fire shift for several seconds in the din of battle.

The video describes this technique, at the squad level, as one of several possible emergency measure rather than being preferred; but for a larger scale maneuver the obvious advantage of a smoke signal is better coordination over a wide area.

In his personal description of the island charge Maj. Richard (Dick) Winters notes:

Talbert, take 3rd Squad to the right. Peacock, take the left with 1st Squad, and I’ll take 2rd Squad right up the middle. Reis, I want your machine guns placed between the columns and I want good covering fire until we reach that roadway. Then, lift your fire and move up and join us. Fix bayonets and get in line as quickly as possible. Peacock, when everybody is in position, I’ll give you a hand signal and you drop a smoke grenade to signal our jump-off.

Good God! Right in front of me was a sentry on outpost, who still had his head down, ducking the covering fire from Lieutenant Reis.

This comparison of the televised scene to Winters' account differs slightly, mentioning:

On a smoke signal, the base of (machine gun) fire commenced, and the three columns started to move across the open field towards the Germans.

At this point, the Band of Brothers episode is deviating from the written version.

There was no delayed smoke signal causing the rest of the assault groups to wait.

Not the answer you're looking for? Browse other questions tagged world-war-two warfare infantry or ask your own question.

33
How beneficial were war bonds to the US during WWII
18
Did the Germans have a team equivalent to the one from Bletchey Park in the UK during WWII?
5
What was the standard pistol used in Yugoslavia during WWII?
21
How far were women able to advance in the Gestapo?
9
Was the Flakpanzer IV used against infantry? If not, what was?
72
Why were Navajo code talkers used during WW2?
4
Were there any "retaliation" anti-tank weapons widely used by infantry in World War II?
2
Were smoke signals used in conflict between European-American and Native Americans?
4
When were the Germans aware of British airborne radar during WWII?
1
Were American mortars better than Soviet ones during WWII?