Multiple sources, ranging from Wikipedia to journal articles over the years (such as this one), record a series of severe winters which caused the Tiber river to be frozen in the above-listed years. All of these sources direct to a book titled Climate: Present, Past and Future (Routledge Revivals): Volume 2: Climatic History and the Future by the late English climatologist Hubert Horace Lamb, who apparently provided the quotation without supplying any clear references, as shown in the page screenshot below: 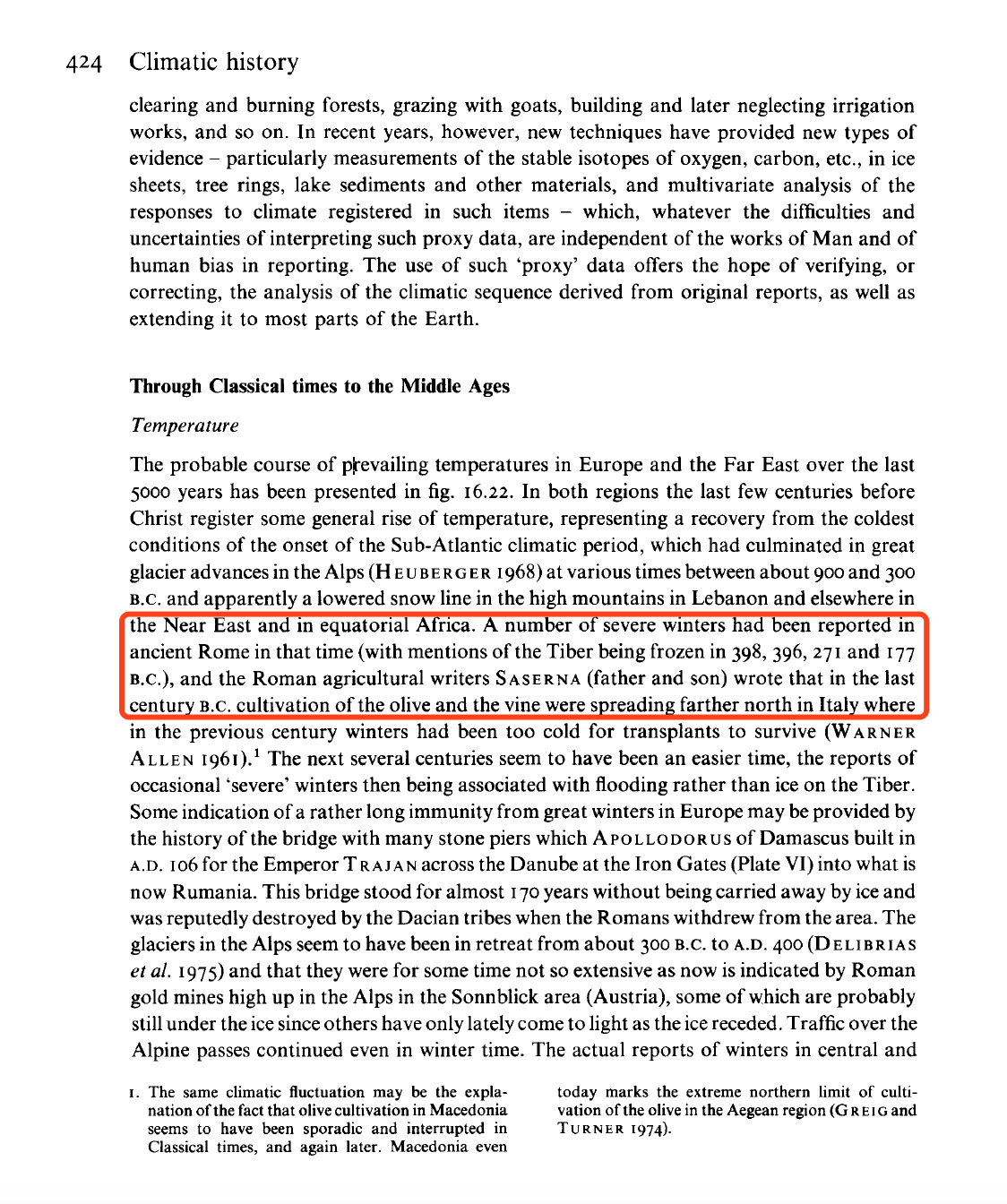 I would really appreciate it if someone can locate actual references from ancient sources (textual or archaeological) that might testify Lamb's quotation. Much thanks in advance.

Livy, when writing about the siege of Veii in 398 BC in History of Rome: Book 5, says:

The year was remarkable for such a cold and snowy winter that the roads were blocked and the Tiber rendered unnavigable.

Source: Book 5: The Veii and the Destruction of Rome by the Gauls

Lamb may have copied a mistake here and got two dates (398 BC and 396 BC) out of one (398). Livy certainly makes no mention of a harsh winter in 396 BC but The Tiber and its tributaries by S. A. Smith (1877) says that he does. The Consular Tribunes given by Livy, as well as the flow of the historical narrative, clearly indicate that the Tiber froze around 2 years before the final defeat of the Veii, which is dated to 396 BC.

This may well be another mistake and should probably be 271 AD, not BC. A couple sources give 271 AD, for example:

Unfortunately, the source for this is not a primary one but an 1826 tome Filosofia della Statistica esposta da Melchiorre Gioja, Tomo Primo (Milan). The earliest source may be St. Augustine (354 - 430 AD) who mentions the Tiber freezing over during the Pyrrhic War which lasted from 280 to 275 BC. St. Augustine doesn't give a specific date, though. In Book 3 Chapter 17 of City of God, "a book of Christian philosophy" he wrote:

Then what shall I say of that memorable winter in which the weather was so incredibly severe, that in the Forum frightfully deep snow lay for forty days together, and the Tiber was frozen? Had such things happened in our time, what accusations we should have heard from our enemies!

For the other date mentioned by Lamb (177 BC), I have found no specific reference but several ancient sources mention or allude to the Tiber freezing over on several occasions.

Juvenal (circa. 55 to circa. 138 AD) alludes to the Tiber being frozen in his Satires. In Book II, Satire 6 he writes:

...In winter she will go down to the river of a morning, break the ice, and plunge three times into the Tiber, dipping her trembling head in its whirling waters...

Paul Reiter, in Climate Change and Mosquito-Borne Disease (pdf) gives a broader picture of climate change in the Mediterranean region, also mentioning the role of science:

Contemporary accounts together with fossil and other evidence suggest that a gradual warming and drying occurred in the Mediterranean region throughout classical times until about A.D. 400 (2). Landscape studies suggest a gradual rise in sea level over this period. Around 300 B.C., beech trees (genus Fagus) grew in Rome, the Tiber River froze in winter, and snow lay for many days.

Your source also mentions the Tiber flooding; this is well-attested to in, for example, The Annals of Tacitus and in Livy's History of Rome.

6
Are there any extant original first-century manuscripts of any of Josephus' works?
6
Was there any influence between the Gracchus reforms and the end of the republic?
19
Is there any evidence of arachnophobia in ancient history?
3
Was there any kind of detective in Ancient Rome?
24
What are some Chinese sources testifying the extreme weather events of 535-536 CE?
5
Are there depictions of horsemen in Roman Republic other than on the coins?