What's the history of this mortar shell?

I was wondering if anyone could give me some history on this shell, which was left to my son by his great grandmother. 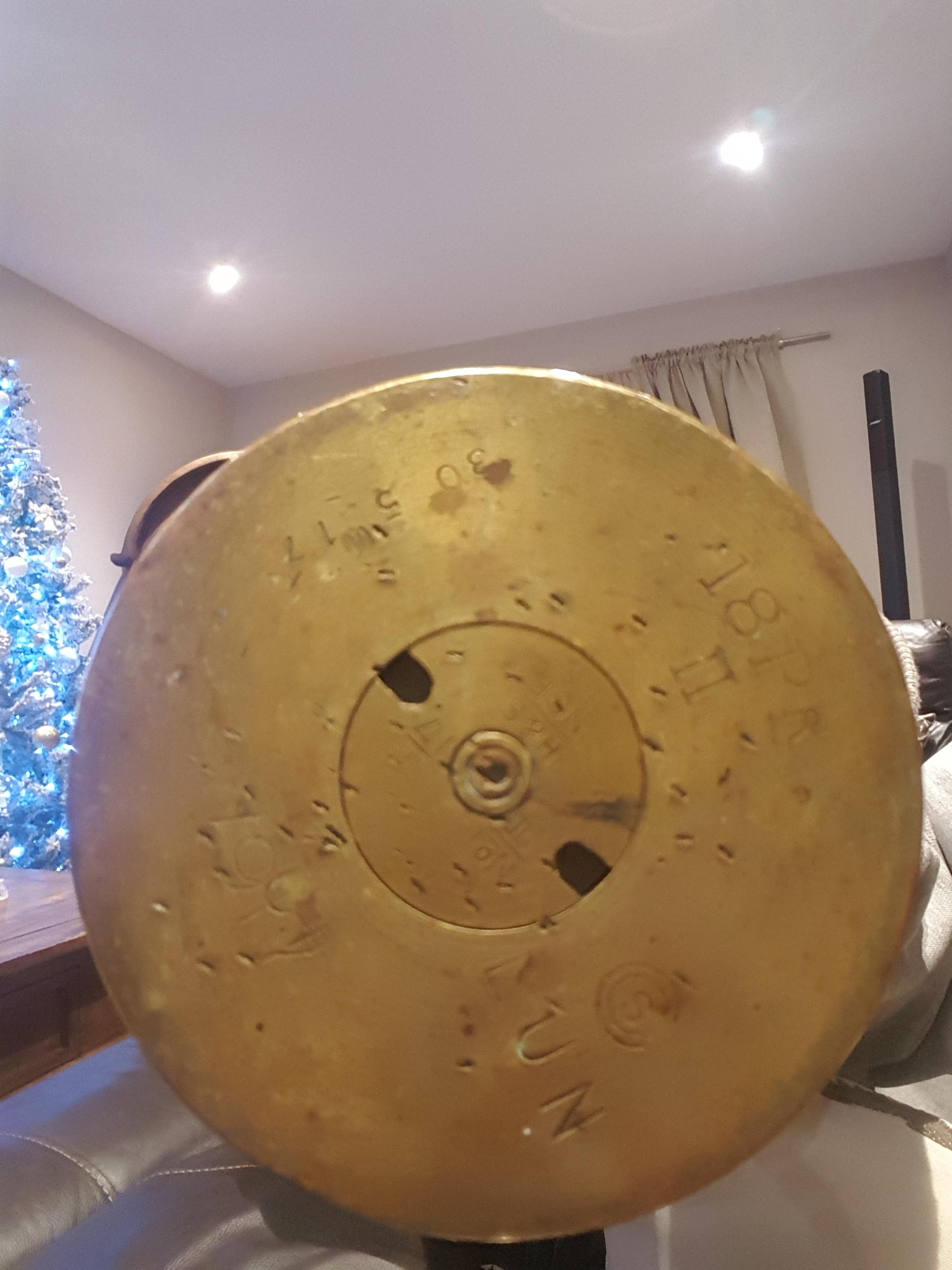 Could anyone give me information about these markings on this mortar shell. Many thanks.

A great resource to help identify the markings on shell casings is usually the Explanatory List of Service Markings to Be Found on Ammunition and Ammunition Packages in Use With the Field Armies 1918. In this case, unfortunately it is on limited use since it appears the main shell case may have been manufactured in Canada.

The stamps that one might expect to find on the base of an 18 pounder cartridge can be found on pages 9-10 of the book.

indicate that this wasn't actually a mortar shell, but is in fact a shell case for an 18 pounder QF Mk II shell.

(The 1914 version of The Handbook of the 18-PR. Q.F. GUN - Land Service is available to read or download as a PDF file from archive.com if you're interested in reading more about the type of gun that would have fired these shells).

is the date on which the shell was filled.

The S contained within concentric circles is the monogram or trade mark of the manufacturer. It isn't shown in the list of Station Monograms and Initials on pp 56-57 of the Explanatory List of Service Markings, but several sites (for example on the Great War Forum) have suggested that that monogram was used by the Copp Store Company, Canada.

The marking below that

should be the lot code for that batch of shell cases. I understand that these three-letter codes are unique to Canadian shell cases.

I can't make out enough detail on the lower markings on the shell case to identify them with any degree of certainty. There appears to be 1917 (presumably the year), over-stamped with other markings.

The markings on the primer are easier to interpret. A primer should have been stamped with:

on the left side of the primer, indicating that you have a a No 1 Mark II primer.

The 17 on the right indicates that it was manufactured in 1917. The number above the 17 is not clear in the photograph, but will be the month the primer was manufactured.

The remaining stamps below the contact pin show that the primer was manufactured at NSF (National Shell Factory) Keighley - No. 2, which was rented from Hall and Steels Ltd (hence the H&S marking).

The indentation in the centre of the contact pin show that the shell has been fired.

If you are interested in researching the background to your shell case futher, there is quite a lot more information on the 18 pounder shell types etc. in the Treatise on Ammunition 1915.

My best guess is an 18 Pounder Mark II shell casing (18 PR II) from World War I. The dimple in the middle indicates it has been fired. Here's an example of the full round from the Imperial War Museum.

I can't read much of the fine detail, but it looks like it may have been filled and fired several times.

Better images with the details in focus and with good contrast would help immensely. Here's an example of a good image with explanations of the markings.

1
What's the story behind this photo from WWI?
7
What's this 1917 shell casing, more exactly?
1
WW1 shell cases
7
Help with identifying my great-grandfather's pre-WWI Cossack uniform
36
Who is this young 'Prince'?
11
Who is this, probably royal, teenager?
18
Who is in this c.1866 photo?
8
Military Uniform of Great Grandfather