What restrictions were in place after WWII on the German aircraft industry?

A question on Aviation.StackExchange asked why the German aircraft industry is smaller than other countries in Europe. I know that the Allies did not want German rearmament after the war and had restrictions on industries that could manufacture war materials. In addition, since many of the rocket engineers went to the US or the USSR, I suspect that many of the aircraft designers did as well.

What were the restrictions on Germany, (and Austria and Italy) after the war and when were they lifted?

East Germany was controlled by the USSR and I imagine that they also restricted aircraft manufacturing since most of the East Bloc used Russian military equipment. Did they have the same restrictions on their military?

The Question is asked based on two incorrect (or incomplete) premises:

1) The German aerospace industry is very healthy. In 2017 Germany was third in the world (behind only the US and France) in dollar value worth of exported aerospace products. Germany was also third in the world in 2017 (again, behind the US and France) in posting the highest positive net exports for aircraft and spacecraft during 2017. (Net exports are defined as the value of a country’s total exports minus the value of its total imports.) [Source: World's Top Exports - Aerospace Exports by Country]

2) Initial restrictions on manufacturing in Germany after WWII, by both the West and the Soviets, lasted only a relatively short time. The West ultimately rejected the Morgenthau Plan, which would have turned Germany into "a giant potato patch," (as Drew Pearson referred to the plan) and instead adopted the Marshall Plan aka the "European Recovery Program, ERP" which rebuilt Western Europe, including West Germany.

There is more to this story. Allied policy evolved from the initial restrictions of the Morgenthau Plan to the eventual recovery of the Marshall Plan:

At the Potsdam conference (July–August 1945), with the US operating under influence of the Morgenthau plan, the victorious Allies decided to abolish the German armed forces as well as all munitions factories and civilian industries that could support them. This included the destruction of all ship- and aircraft-manufacturing capability. Further, the victors decided that civilian industries that might have military potential were to be restricted. [Source: Wikipedia - Allied plans for German industry after World War II]

Immediately following the unconditional surrender of Germany, The Western Allies adopted and implemented JCS 1067 which outlined a harsh occupation and military governance of defeated Germany (see also: Morgenthau Plan - JCS 1067). The warplanes and rockets of the Luftwaffe were eradicated. Many were destroyed, broken down and recycled for raw materials to be used for German basic living needs. Others were whisked away to conquering nations, either for study (Operation Paperclip, Operation Backfire, Operation LUSTY, and Operation Osoaviakhim), or in the case of France, to be used to replenish their own air forces. Many German factories were either dismantled for economic salvage value or simply destroyed. [Sources: General Aviation News - End of an Air Force: Germany after World War II and Wikipedia - Reconstruction of Germany]

The first "level of industry" plan, signed by the Allies on March 29, 1946, stated that German heavy industry was to be lowered to 50% of its 1938 levels by the destruction of 1,500 listed manufacturing plants. In January 1946 the Allied Control Council set the foundation of the future German economy by putting a cap on German steel production capacity: the maximum allowed was set at about 5,800,000 tons of steel a year, equivalent to 25% of the prewar production level. The UK, in whose occupation zone most of the steel production was located, had argued for a less-limited reduction of 12 million tons of steel per year, but had to submit to the will of the US, France, and the Soviet Union (which had argued for a 3 million ton limit). Steel plants thus made redundant were to be dismantled. Germany was to be reduced to the standard of life it had known at the height of the Great Depression (1932). [Source: Wikipedia - Allied plans for German industry after World War II - Level of industry plans]

But former Allies were drifting apart and the Cold War was taking shape. By the middle of 1946, US and UK policy towards the German economy began to change "as the Germans were seen as possible allies in the conflict and the dawning realization that the economic recovery of Europe was dependent on the reactivation of German industry" (Wikipedia, Reconstruction of Germany). As a result, there was a moderation of policy:

In July 1947, President Harry S. Truman rescinded on "national security grounds" the punitive occupation directive JCS 1067, which had directed the US forces of occupation in Germany to "take no steps looking toward the economic rehabilitation of Germany [or] designed to maintain or strengthen the German economy." It was replaced by JCS 1779, which instead noted that "[a]n orderly, prosperous Europe requires the economic contributions of a stable and productive Germany." Nevertheless, General Clay needed over two months to overcome continued resistance among his staff to the new directive, but on July 10, 1947, it was finally approved at a meeting of the SWNCC. The final version of the document "was purged of the most important elements of the Morgenthau Plan." [Source: Wikipedia - Allied plans for German industry after World War II - Moderation of policy]

With an Iron Curtain separating East Germany from West, this became the front line of the Cold War. Re-armament was taking place in both East and West as the Warsaw Pact and NATO began preparations in case this new Cold War suddenly turned hot.

West Germany became a partner in NATO and participated in the European economic recovery due in part to the implementation of the Marshall Plan. Since the Cold War's beginnings right after World War II, and up through today, Germany has been a strong contributing partner to NATO's air capabilities. For example, the PANAVIA Tornado was jointly designed and produced by Italy, Germany and the UK.

But comparing Germany to other European nations may have less meaning than comparing European aerospace as a whole with the US, China, Japan and Russia. Europe has become a consortium, and even before the EU was established in 1992, the European Economic Community, or EEC, took shape as early as 1957 with the Treaty of Rome. As a result of the formation of the EEC:

During the 1960s, European governments allowed aircraft and missile firms to fail or consolidate into clear “national champions:” British Aircraft Corporation, Hawker Siddely Aviation, and Rolls-Royce in Britain; Aerospatiale, Dassault, SNECMA and Matra in France; Messerschmit-Bölkow-Blohm and VFW in Germany; and CASA in Spain. Then governments asked their national champions to join transnational consortia intent on building specific types of aircraft — like the PANAVIA Tornado fighter, the launch vehicles and satellites of the European Space Agency or, most successfully, the Airbus airliners. The matrix of many national firms participating variously in many transnational projects meant that the European industry operated neither as monopoly nor monopsony. [Source: Economic History Association - The History of the Aerospace Industry]

Today, the Eurofighter Typhoon is Europe’s largest military collaborative program and Eurofighter Jagdflugzeug GmbH is headquartered in Hallbergmoos, Bavaria, Germany. In Civil aviation, Airbus has a strong presence in Germany, with offices and manufacturing in Hamburg, Munich, Stade, Friedrichshafen, Manching, Donauwörth and other locations, employing more than 46,000 across 27 sites in Germany. [Source: Airbus]

Also, as can be seen in the bottom right of this graphic from the World Economic Forum, between 1995 and 2011 Germany was number one in the world in growth of aerospace exports: 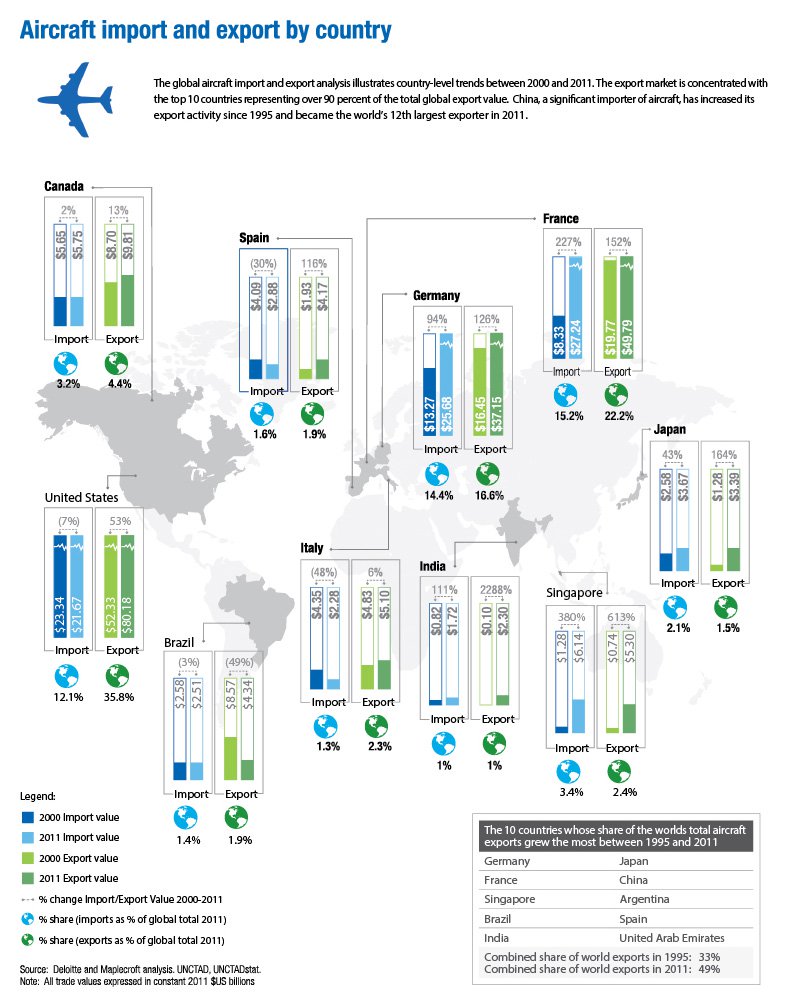 Not the answer you're looking for? Browse other questions tagged world-war-two germany cold-war aircraft nato or ask your own question.

5
How high the death rate on the Berlin Wall compared to other borders?
16
What was the legal status of an East German once he had reached West Germany?
14
Why didn't Hitler invade Middle East for resources first before invading Soviet Union?
26
What was the economic basis for West Berlin?
18
When did the Soviets get the ability to drop a nuclear bomb on the United States?
2
What kind of AA defenses did the US East Coast have around the time of Paukenschlag?
14
Did NATO promise Gorbachev not to accept membership applications from former Warsaw Pact nations?
12
Which Allied aircraft scored the most air-to-air kills against the Me 262 in WWII?
11
What transit restrictions were in place in Occupied Germany limiting military and civilian movement between the four occupation zones?
4
Did the United States taxpayer fund the development of China's backbone fighter plane?