In epic migrations, why keep going?

Over time human cultures tend to naturally migrate, influenced by various push and pull factors. According to the gravity model of migration and specifically the concept of distance decay, very few of these displacements are over long distances. This theory helps explain why we have dominant regional cultures instead of a completely entropic mixture. 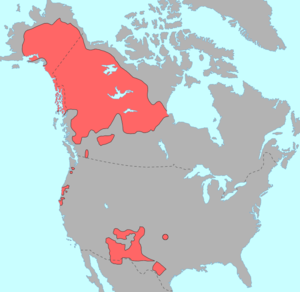 Like Athabaskan peoples shown on the map above, some cultural identities have survived treks of thousands of miles. Linguistic evidence shows that the Navajo and Mexica have roots far to to the north of their modern homelands. Certainly they blended with neighboring peoples along the way, but their languages still reflect those particularly far-away kinships. To indulge in a little survivorship bias, not many cultures succeeded at making such epic treks while maintaining their identities.

Critical masses of each group apparently had reason to keep going even while crossing entire climate zones. I'm curious about this behavior, since it's hard for me to imagine that getting away from enemies and finding new sources of food would take quite so much travel.

How could push or pull factors persist across such great distances?

The answer lies in the 1000s of years of "keeping going" and the distance every generation of males moves.

If you suppose a "generation" takes about 20 years, each son moves 20 miles away from his family to have his own plot of land and/or find new sources of plants and animals, then in 1000 years, you have 50 generations x 20 miles = 1000 miles. (Not to mention that multiple sons of a father will radiate out in different directions.)

20 miles is a long day's walk, or two easy days; close enough to help each other on major tasks but far enough that they can't just pop over for a few minutes and interfere.

That would be given the existence of livable land only 20 miles away. If the sons have to travel farther to find a living place, then migration would happen even faster.

You might want to look into the migration of (Germanic-speaking) Vandals and Suebi and (Iranic-speaking) Alans from Central Europe to Spain and then on to Carthago. Or the migrations of the Kalmyks to Kalmykia and then (in part) back to what is now NW China.

In both of these cases people started migrating because their original location became too inhospitable, for political and/or military reasons. They migrated in large groups because people along the way were not particularly friendly and because the places they went to were already populated. I.e. there was a need for strength in numbers. The political leadership kept on migrating until they had reached a location that promised to be viable economically and was reasonably secure from military intervention. I.e. for the Vandals, (what os now) France was too close to Italy. Spain turned out to be not far away enough either. And (what is now) Algeria and Morocco were not as rich as Carthago.

A point* here is that the map represents a snapshot in time, the red areas being CURRENT speakers of Athabaskan-family languages. As such, it quite possibly gives a misleading impression of the Navajo & Mexica having made a great epic migration to the south.

There is an alternative explanation that seems at least equally plausible to me. That is that at one point Athabaskan speakers had, through slow expansion, occupied the entire area between Canada/Alaska and the US southwest. Then people from other language groups moved in and separated the two.

There is ample evidence of similar replacements. For instance, Celtic-family languages were once (1s millenium BCE, per Google) spoken in most of Europe. Invasions &c by Latin & Germanic people gradually displaced the Celtic languages, until today they are only native to the northwest fringe of Europe.

*Which should be a comment, and had quite blamelessly existed as such for going on three years, before being rudely deleted from where it properly belonged.

Some people are nomads and hence they migrate naturally. For example, the travellers or Romani originated from India and they travelled through Egypt - hence their colloquial name, (e)gypsies to Europe. That's some epic migration. Quite a number of them keep to this lifestyle, though I suspect that the numbers adhering to this lifestyle in Europe have dwindled. This journey is detailed in a moving and sympathetic way in the film, Latcho Drom, by the film-maker Tony Gatliff of Romani descent and which was regarded highly in the 1993 Cannes film festival.

This is quite different from the European invasion of the Americas aftwr Columbus stumbled upon that continent. There, an essentially sedentary people invaded another continent and settled it. Hence Settler-Colonialism. They kept going as they had guns and germs and spread throughout that whole continent. (See Jared Diamonds Guns, Germs and Steel by Jared Diamond).

Not the answer you're looking for? Browse other questions tagged cultural-history native-americans travel immigration migration or ask your own question.

5
Did Emperor Gaozu of Han allow people he conquered to keep their cultural identities?
20
Why did the Native American city of Cahokia die out?
4
Why do soldiers keep their right hand inside the uniform blouse?
9
Why did Ancient Pueblo peoples build their homes in cliffs?
9
Why was immigration from France to the United States lower than from some other countries?
14
Why did Native Americans originally migrate to the Americas?
34
Has there ever been a major migration from the New World to the Old World? If not, why?
5
Why was Madagascar settled by far-flung Austronesian seafarers?
3
How would emigrants travel the railway lines going from Grajewo to Bremerhaven in 1911 and from Grajewo to Rotterdam in 1917?