Has an encirclement ever succeeded with numerically inferior cavalry?

This is a follow up to my previous question. In all the examples given there was some other advantage that decided the battle and not encirclement. For example at Narva

They attacked inexperienced Russian regiments and crumbled them one by one.

Also Finnish Motti tactics in the winter war, Teutoburg etc are a type of divide and conquer ambush tactic and not simply an encirclement. At Alesia there are no historical details but I have not seen evidence Rome had less cavalry than the enemy.

I cant find any examples where the encircler didn't have have a superior local number of motivated cavalry.

Has an encirclement ever succeeded with numerically inferior cavalry?

I'm not sure if this counts as a valid answer, but ships of the line are always superior to cavalry. Or, in this case: nearly always.

In 1793 the Dutch fleet was frozen at anchor, moored close to Den Helder, near the island of Texel. That winter was quite severe. Even the Rhine river froze over, as were parts of the North Sea close to shore. The Dutch republic was at war with the French republic - and losing. A French cavalry unit captured the fleet intact.

General Pichechru (in Dutch he's known as Pietje Cru) knew the ships were iced in. He ordered the very appropriate named general Jan Willem de Winter to capture the fleet intact. He used hussars and infantry, carried on the backs of the horses. The hooves were covered with fabric to muffle the sound. The hussars rode up to the ships, quietly, and the infantry boarded the ships. The fleet was captured intact, without casualties.

That capture ended the war. It's one of the very few examples in history of cavalry capturing a fleet.

The Battle of Cowpens where 300 British cavalry (250 of the British Legion plus 50 of the 17th Light Dragoons) outnumbered American Cavalry of only ~180 men and horses ("82 Continental light dragoons; 55 state dragoons; 45 militia dragoons") by almost 2:1.

Total forces for both sides were about 1,150 British against about 1,900 (most poorly trained and disciplined militia) Americans.

Caught in a clever double envelopment that has been compared with the Battle of Cannae in ancient times, many of the British surrendered.

AN interesting note - in both this battle and Cannae, Morgan and Hannibal leverage the very weakness of their main battle line into a tactical advantage that sets up the double envelopment. 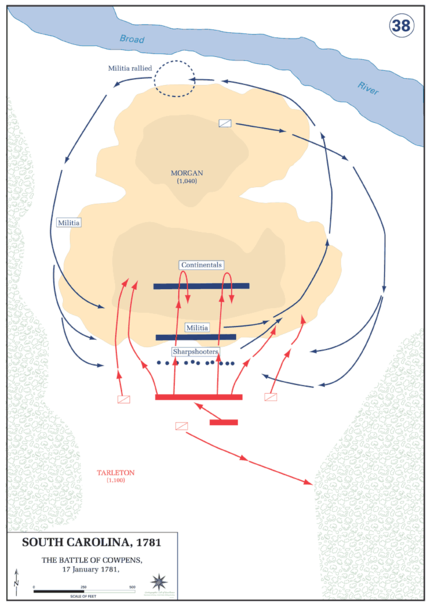