Is (or was) there a version of the Maltese Cross with the right arrowhead missing? Does it have a name?

I'm trying to answer a question (link in Spanish) in the Spanish language site about a funny definition a user found in the Royal Spanish Academy's dictionary. It follows:

hammer: The Cross of the Order of St. John, removing the right arm (or arrowhead).

I suppose the name 'hammer' refers to the figure that remains when you remove the right arrowhead of the Maltese Cross:

I've been trying to find information about the origin of this meaning of the word martillo. So far I have found a book, written in 1828 in Spanish, that says that the order was divided into knights, priests and servants, and also says that (my translation, sorry):

The current badge of [the knights] is an eight-pointed gold cross, crowned and enameled in white, angled in gold lises, which they carry in the buttonhole of the coat, pending from a black ribbon. The friars also wear it, but they must have the same cross of white cloth on the manteo or dress on the left side, whose distinction is also used by professed knights; and the servants carry it of only three arms, of enamel or linen, according to their condition.

This order is quite old and previously called Hospitaller. The earlier designs were much simpler crosses and not really "arrow-like". The design is quite varied over the medieval period and ranged from a plain Latin cross to the 'modern' design. 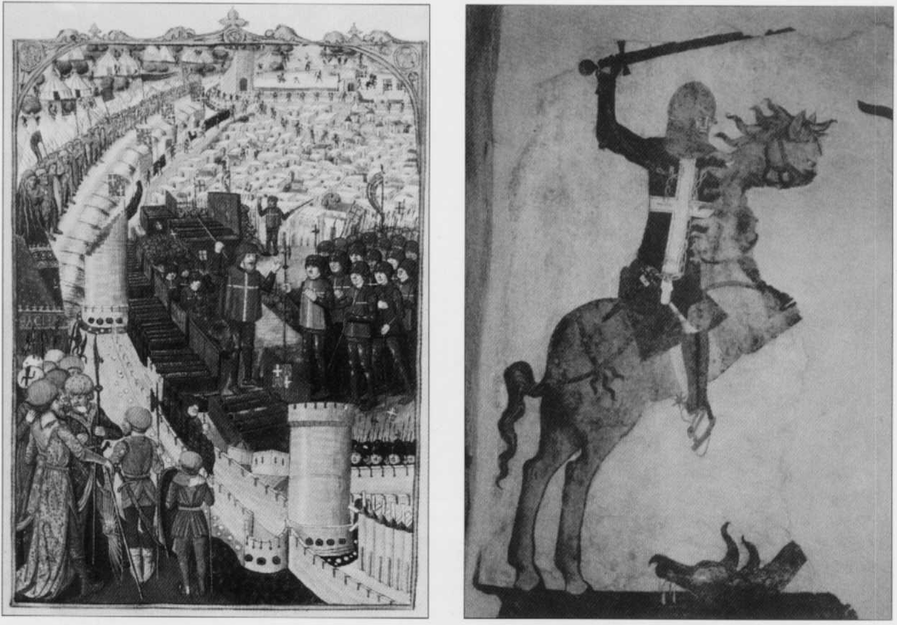 While there was an order that has probably a very similar design, it was probably not what is requested here:

As the members of that order ultimately ended up in the Knights Templar.

If we look at either the now older depictions of members of the Hospitaller order it becomes clear that the association for a hammer is much easier when looking at the flag, ancient and for the Maltese as well, when just one "arm" is taken away:

But there may well be such a half cross more resembling the arrow heads: 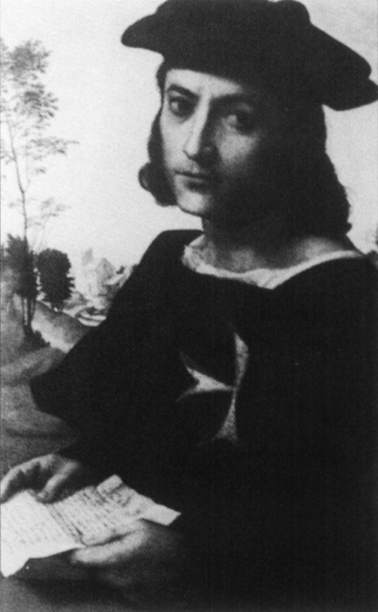 "This anonymous but thoughtful-looking young member of the order was painted by Francesco Francia in the early 16th century. (National Gallery, London, England) (David Nicolle: "Knight Hospitaller. 1306–1565", Warrior, Osprey, 2001.) [Note that unless a better reproduction comes along, there remain some doubts whether this is not coverd up by the overcoat?]

As for the Spanish martillo as a term for that variant of the cross: I only ever found English literature referring to half-brothers (confratres) wearing "half-crosses" (example).

One of those, online, even has an interesting play on that "cross image" in heraldry: 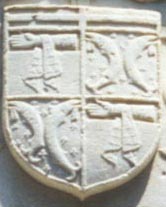 Arms of Philippe de Villiers de l'Isle-Adam as bailli; Rhodes.
Bailliffs (or Baillis) were the heads of the Tongues and holders of the great offices of the order. Since the 15th century they bear a chief with the arms of the order. Miniatures in Caoursin's manuscript show the Baillis in session around the Grand Master, each holding a string of beads with a fiocco at the end; also, the tombstone of the French Bailli Montmirel in the Archaeological Museum, Rhodes, shows two such strings placed on both sides of his coat of arms.

According to the descriptions the early designs of the Hospitaller were not only often quite similar to the design of the Teutonic knights, their statutes also were similar in allowing donats and confratres only wearing the half-cross, not the full one. Going from there, an old seal of the city of Allenstein (Olsztyn) displays such a half-cross (of the Teutonic knights, which nicely illustrates why one might see a "hammer": 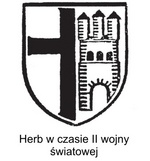 Not the answer you're looking for? Browse other questions tagged spain heraldry malta crusaders hospitallers or ask your own question.

13
Was there any new military innovation during the Siege of Malta?
10
Was there a Spanish plan to retake Malta, had the siege of 1565 been succesful?
13
What was El Greco's relationship with the Spanish Inquisition?
9
Why does the Ħaġar Qim seem to have drilled holes / pitted dots on its stoneworks?
7
What was the name of the Ottoman-Spanish truce in 1580?
1
Why does the word “al-Ahmar” appear in the name of ibn al-Ahmar?
7
Was the Maltese Falcon a real historical artifact?