How did US anti-Irish sentiment decline?

Anti-Irish sentiment in the United States previously involved depictions of Irish migrants as non-human primates. While historians have debated the prevalence of contemporaneous "No Irish Need Apply" signs, such a sentiment was widely discussed, with Irish Americans referencing it after 1860. For the sake of this question, I take the decline in both of these phenomena as suggestive of a decline in US anti-Irish sentiment.

Sources such as Ignatiev 1995 argue Irish migrants to the United States were initially perceived as non-white, and that the subsequent classification of Irish Americans as white and the decline in anti-Irish sentiment was largely driven by Irish alignment with anti-black racism, beginning with support for the Democratic Party in the antebellum North. The idea that Irish Americans have only recently been considered white is often cited, at least by non-historians, as an example of how whiteness is a social construct.

However, Arnesen 2001 argues such analyses conflate race with economic status and ignore the legal rights provisioned to Irish immigrants c. 1830, and concludes a former classification of Irish people as not white is a product of historical revisionism.

I'll make two preliminary points before addressing the question directly. First, there isn't anything terribly unique about Irish-Americans as compared to white ethnics in general, and so my answer will be on that level applicable to Jews, Italians, etc. Second, I think it is easy to answer this question if we approach economic class and social status (of which race is but one particular form) as distinct but inter-related. In other words, having a higher social status (including being seen as partially or fully white) can help a group move up economically, but also vice-versa; white ethnics were seen as less-than-white in part because they were poor.

Getting in to the historical substance, I would first say that from a strictly formal-legal perspective, the Irish and other white ethnics were always white. Yang and Koshy (2016), "The 'Becoming White Thesis' Revisited" lays this out very clearly. But that in itself doesn't disprove the Ignatiev thesis at all. In terms of social prestige, and the degree of 'whiteness' of the Irish and other ethnics was certainly questioned through much of the nineteenth and into the early twentieth centuries. Just one striking visual example of this comes from H. Strickland Constable (1899) Ireland from One or Two Neglected Points of View which argued that the "Irish Iberian" race was intermediate in evolutionary development between the "Anglo-Teutonic" and the "Negro". 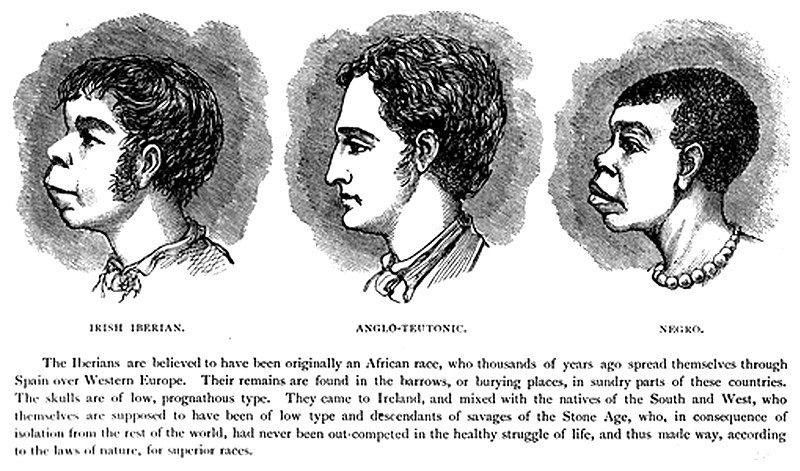 Now finally to get to directly addressing the headline question of what changed. The most important historical turning point for white ethnics when their social and economic conditions changed rapidly was the early post-war boom period into the early 1960s. Government programs like the GI Bill, the interstate highway system and so on allowed and encouraged upwardly mobile white ethnics to move to the suburbs and accumulate wealth in the form of home ownership. Blacks and Latinos were excluded from this to a great degree by racial discrimination, notably in the form of formal redlining and restrictive covenants. The more that white ethnics became associated with the middle class suburbs, the more completely their former racialization as "not-fully-white" began to fade. Meanwhile this "white flight" led to disinvestment in the inner cities, reinforcing a growing association between black/brown people and unprecedented levels of urban blight, crime and poverty.

In sum, I don't think it's tenable to argue that "a changing definition of whiteness [is] part of the explanation for anti-Irish sentiment's decline", but rather, the exact reverse. The intermediate position of white ethnics in a status hierarchy defined by race allowed them to move up economically in the changing post-war economy. Anti-black racism may have had a part in maintaining that intermediate position back through the ante-bellum period, but much more importantly, it was part of the basis of their cultural assimilation and economic upward mobility after World War II. Economic change (specifically the growth of a suburban middle class, increasingly educated and white-collar) made the older racial denigration of white ethnics obsolete.

14
Why did anti-Chinese riots occur during the Indonesian Reformation of 1998?
4
How many illegal aliens were deported under "Operation Wetback"?
3
What was the general attitude of people in states without anti-miscegenation laws toward interracial marriage?
45
What do the numbers on this 1960s anti-integration sign mean?
3
What did anti-Greek stereotyping look like in the United States in the early 20th century?