Why did US annex Hawaii? [closed]

Was there an economical or political reason for the annexation of Hawaii by US in 1898?

It does not seem to me that Hawaii was a particularly wealthy place at that time. Did the US government need to distract its people for some reason? Or is it just that the bigger you are, the better for you and Hawaii Kingdom was simply colonised?

It's true that US has "claimed" Hawaii. But why would US claim such a barren land? Does it have some sort of strategic value, and if so, what would it be?

Question:
Why did US invade Hawaii ？

The United States was interested in expanding trade in the Far East. In order to accomplish this they needed coal refueling bases. Hawaii with it's excellent port of Pearl Harbor was a valuable intermediate station for the United States. In 1887 a group of American businessmen, missionaries, and planters calling themselves the Hawaiian League forced King Kalakaua to grant the United States exclusive rights to Pearl Harbor and permission to construct a coaling station and repair facility inside the harbor. They forced King Kalakaua to accept a new constitution - which he called the Bayonet Constitution .

When a new Hawaiian Queen Liliuokalani moved to reverse these actions, the United States worked with Hawaiian Sugar Plantation owners to over throw her. The American Contribution to the coupe which forced the Queen to abdicate was a Marine Landing party off the protected Cruiser Boston. The Marine landing party surrounded the Royal Palace capturing the Queen, as Plantation Owners who were ethnically American took control of the government in a bloodless coupe. January 17, 1893. 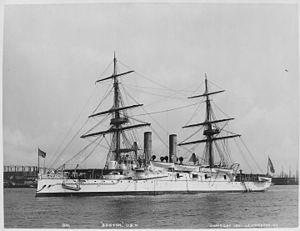 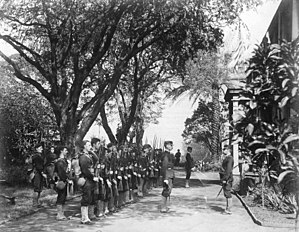 The ship's landing force on duty at the Arlington Hotel, Honolulu, at the time of the overthrow of the Hawaiian monarchy, January 1893. Lieutenant Lucien Young, USN, commanded the detachment, and is presumably the officer at right.

Some of the world’s most sought after commodities - tea, porcelain, and silk came from China and Western merchants competed for access to this important and lucrative market.

In February 1784, the first American ship sailed to China, followed by a steady stream of merchants hoping to open the door to U.S. Chinese trade.

By 1890 The United States economy was the largest in the world. Twice the size of it's next greatest competitor. The Rise of Industrial America, 1877-1900

The United States Becomes a World Power
Between 1870 and 1900, the European powers seized 10 million square miles of territory in Africa and Asia, a fifth of the world's land mass. About 150 million people were subjected to colonial rule. In the United States, a growing number of policy makers, bankers, manufacturers, and trade unions grew fearful that the country might be closed out in the struggle for global markets and raw materials.

This created a new American interest in an old concept. A second manifest destiny.

US State Dept: Annexation of Hawaii, 1898
. When Queen Liliuokalani moved to establish a stronger monarchy, Americans (Native American Hawaiian sugar plantation owners) under the leadership of Samuel Dole deposed her in 1893. The planters' belief that a coup and annexation by the United States would remove the threat of a devastating tariff on their sugar also spurred them to action. The administration of President Benjamin Harrison encouraged the takeover, and dispatched sailors from the USS Boston to the islands to surround the royal palace. The U.S. minister to Hawaii, John L. Stevens, worked closely with the new government.

Dole sent a delegation to Washington in 1894 seeking annexation, but the new President, Grover Cleveland, opposed annexation and tried to restore the Queen. Dole declared Hawaii an independent republic. Spurred by the nationalism aroused by the Spanish-American War, the United States annexed Hawaii in 1898 at the urging of President William McKinley. Hawaii was made a territory in 1900, and Dole became its first governor. Racial attitudes and party politics in the United States deferred statehood until a bipartisan compromise linked Hawaii's status to Alaska, and both became states in 1959.

Why did the US want Hawaii?

Manifest Destiny Moves into the Pacific 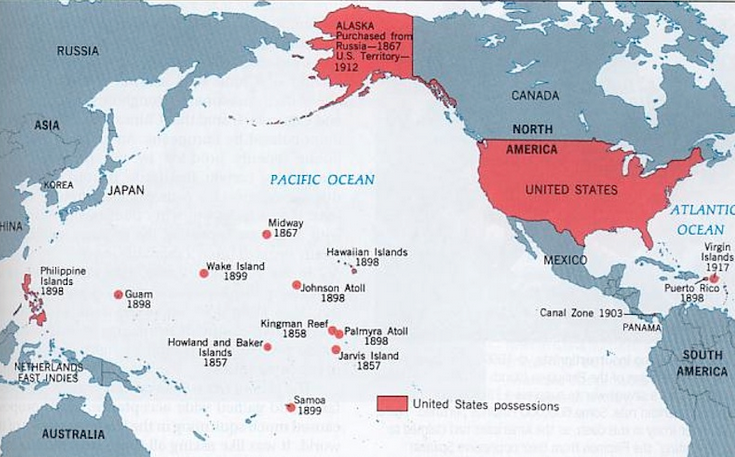 The reason was Hawaii, American Samoa and Midway Islands and other posessions were infrastructure which allowed US trade ships to refuel on coal on their way to China. Trade with China was profitable and the United States was trying to muscle it's way into that trade.

History of Hawaii: Territorial Years Due to technologies of the time, only two American naval vessels had the mechanical capabilities of making the lengthy trip from California to Manilla without taking on more coal which was required to power their steam engines. The islands were seen as the perfect location for a military base as it was quite centralized in the Pacific Ocean, an asset which would certainly give an advantage to the island's owners because it was an ideal place from which they could launch an imperial power into Asia.

EMERGENCE TO WORLD POWER, 1898-1902. AMERICAN MILITARY HISTORY
This new manifest destiny first took the form of vigorous efforts to expand long-established American trade and naval interests overseas, especially in the Pacific and Caribbean. Thus, in the Pacific the United States took steps to acquire control of coaling and maintenance stations for a growing steam-propelled fleet. In 1878 the United States obtained the right to develop a coaling station in Samoa and in 1889, to make this concession more secure, recognized independence of the islands in a tripartite pact with Great Britain and Germany. In 1893, when a new native government in Hawaii threatened to withdraw concessions, including a site for a naval station at Pearl Harbor, American residents tried unsuccessfully to secure annexation of the islands by the United States. Development of a more favorable climate of opinion in the United States in the closing years of the century opened the way for annexation of Hawaii in 1898 and Eastern Samoa (Tutuila) in 1899.

@user2259716
Economic policies aside, the British took Hawaii first, but gave it back. Hawaii was weak. So the question became, do we want the British or the Germans to take Hawaii or do we take it ourselves?

Yes Britain discovered Hawaii first and had close trusted relationship with several Kings. Britains influence was diminished when British and American Protestant missionaries divided the pacific into spheres of interest and Hawaii fell into the American sphere. That and almost immediately upon discovery Americans settlers outnumbered British settlers. So 50 years after Britain briefly controlled Hawaii (less than 1 year) America held the upper hand in Hawaii. And it was American sugar and pineapple growers and businessmen who belonged to the secret society, "the Hawaiian League" who forced the Hawaiian king to sign the bayonet constitution which diminished native Hawaiian rights on the Island.

History of Hawaii
A war scare with France in 1843 lead to the Hawaiians temporarily coming under formal control of the British. At the request of the Hawaiian king, the British flag was raised over each island, and all Hawaiian flags were destroyed. A queen's regiment of Hawaiian soldiers was formed and pledged allegiance to Victoria, and three Hawaiian schooners were renamed the Albert, the Adelaide, and the Victoria. When it became apparent that no threat was imminent, the British restored full control to the Hawaiians in July of the same year.

Not the answer you're looking for? Browse other questions tagged united-states political-history independence invasion hawaii or ask your own question.

22
Why was the bald eagle chosen as the national bird of the United States?
2
Why did Meriwether Lewis think that William Clark was coming to help him just before he killed himself?
2
What portion of tariffs was paid by Southern states before American Civil War?
11
Why did China annex Tibet?
2
Was arson prominent in the Kingdom of Hawaii?
3
British Warships and Their Crew In Hawaii in the Mid-1800s
7
Did imperialist Japan ever want to annex Hawaii because of the Japanese minority living here?
3
Why did the Kingdom of Hawaii remain stagnant during an invasion?