According to the U.S. Geological Survey's article How much water is there on, in, and above the Earth?,

About 71 percent of the Earth's surface is water-covered

Wikipedia's Earth article also gives ‘about’ 71% (with 29% land) and also cites the perhaps more precise figures of 70.8% / 29.2% found on this University of British Columbia Okanagan page, but none of these sources say when these estimates were first made.

The only estimate with a date I’ve found is in A comprehensive atlas, geographical, historical & commercial [cartographic material], published in 1835, which states that oceans (including inland bays and seas) cover

about three fourths of the surface of the globe.

However, this source does not include Antarctica, the last continent to be discovered, which accounts for 9.2% of earth's land area, and around 2.6% of the earth’s surface.

Antarctica was discovered in the early 1820s, but it was not until in the late 1830s / early 1840s that three expeditions sailed around the continent. Not until several decades later, from the late 1890s, were there many expeditions to Antarctica. The map below, dated 1906, appears to be one of the earliest Antarctica maps in which the continent’s shape is reasonably recognizable (there is also what appears to be a less accurate one from 1897). 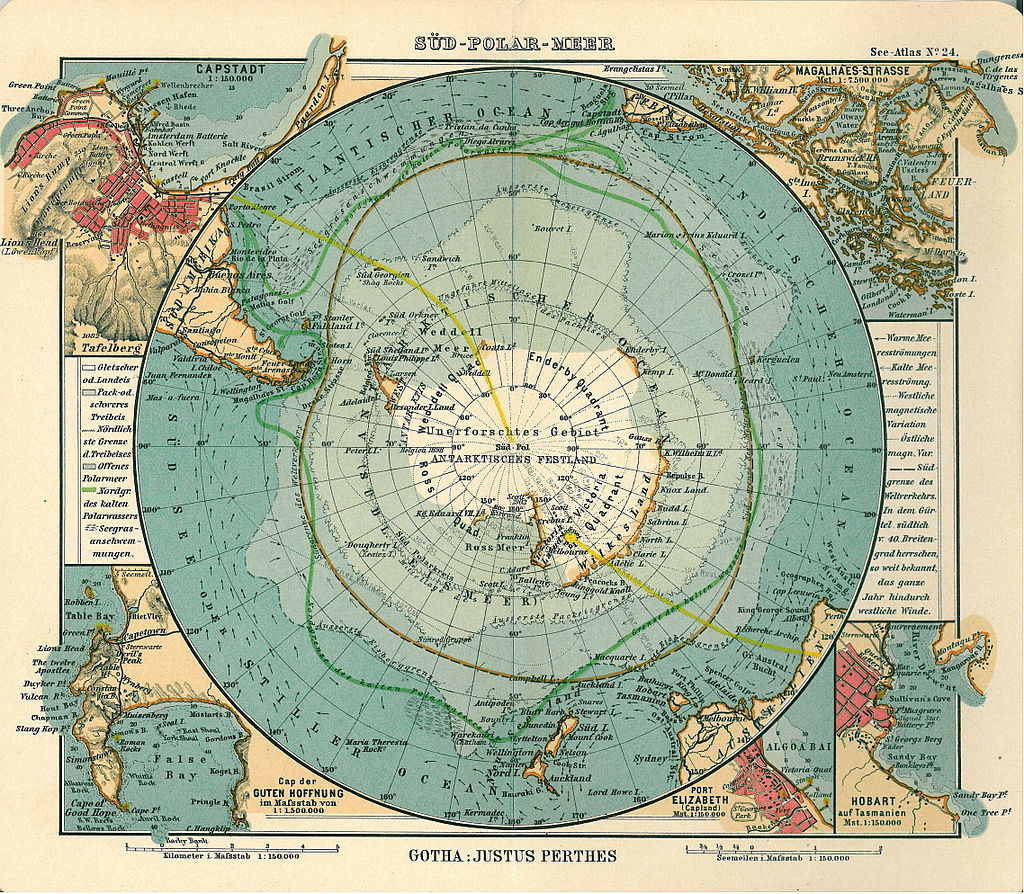 Note on the comments below

While useful and informative, the comments unfortunately do not provide a date and focus more on the ‘how’ than the ‘when’. I am not asking ‘how’ (that would almost certainly be off-topic) but about ‘when’. Further, none of the sources cited (USGS, Wkipedia, University of British Columbia Okanagan) mention tides, seasonal cycles or the fractal nature of coastlines as affecting the percentages they cite, nor have I found any sources which give me reason to question the existing narrative (‘about 71% / 29%’ or 70.8% / 29.2%).

After looking at lots of atlases and physical geography books on the internet archive, the first mention I found of 70.8% water and 29.2% land is in the German Knaurs WELT-ATLAS, 1932 edition.

Most books between 1924 and 1932 don't give an exact number, they just say something like 'nearly or almost three fourths of the earth's surface is covered in water'.

It looks like some authors were behind current knowledge (or maybe the editions weren't updated?). For example, one book after 1930 says 72.5% water and 27.5% land (Earth Lore A Physical Geography, 1932).

I haven't found anything close to your numbers before 1930, but the 1924 edition of Bartholomew's The handy reference atlas of the world gives areas which work out at 71.8% water and 28.2% land.

Not the answer you're looking for? Browse other questions tagged 20th-century 19th-century maps geography or ask your own question.

6
At what point did mapmaking begin to accurately reflect what we now know about the earth?
12
What land did Polish nationalists claim in 1914?
2
What is the earliest map of Washington, D.C.?
4
Who were the earliest Californian university students?
2
Have there been any instances of US states trading land, not related to the creation of a state?
1
Where in San Francisco did the Land Commission meet?
1
What were the divisions of the city of Paris between the 12th and 13th centuries?
1
When and how was the cairn structure in the "Sea of Galilee" covered in water?