Why wasn't there more use of wind power in antiquity?

Wind power [was never] taken seriously in the ancient world [...] though Hero of Alexandria described a windmill connected to an air pump designed to blow an organ, there is no evidence for the existence of any rotary windmills before the tenth century CE.

Mechanical knowledge had a long way to go in antiquity, but my understanding is that the Romans and Hellenistic Greeks made limited but significant use of water power for mills, clocks, and more rarely, automatons. My question here is pretty straightforward: Are there any clear reasons why wind power was never used, especially considering that watermills require a constant and fairly heavy flow of moving water? (Not that you can set up a windmill just anywhere, but it's surprising to me they don't appear as an alternative in areas without strong rivers.)

For this question please take antiquity to mean the Mediterranean and Near Eastern world from the end of the Bronze Age in 1200 BC up to the decline of Rome around 500 AD.

I was wondering if it might be something in the difficulty of engineering wind. An answer explaining why it was difficult to engineer and what technical innovations led to wind power becoming viable in the Medieval and Islamic worlds would fit the question parameters very well.

I believe windmills have to wait until the late Middle Ages because, due to the inequities of the cube-square law, making life size operational windmills is very difficult.

The cube-square-law is a consequence of the areal surface rising as the square of the dimension while mass increases as the cube. However the strength of a material is proportional to the areal surfaace, and in a windmill so is the motive power collectible from the wind. However the loads are increasing much faster as one scales a model up to real life.

However the wind itself, due to air's low density, is a much weaker motive force than is for example water. Further, even with modern materials it is not possible to construct windmills that can operate safely in high winds - so it is necessary to rely only on moderate breezes. A further requirement on the materials is that to catch the wind the wheel must usually be elevated, far from the mill itself at ground level to be convenient for loading an unloading. This in turn requires higher performing materials, such as high grade steel.

In order to overcome friction the tolerances on the horizontal-vertical-gear must be very precise. It was only with the perfection of casting techniques developed for first bell making, and then cannon manufacture, that the necessary tolerances were achieved for high strength steel products. This occurs in and around 1200, just when the first vertical plane windmills appear in Europe.

it is true that horizontal-plane windmills are attested in the Middle East and China from several hundred years earlier, but these were inefficient due to the necessity of shielding half the turbine from the wind. 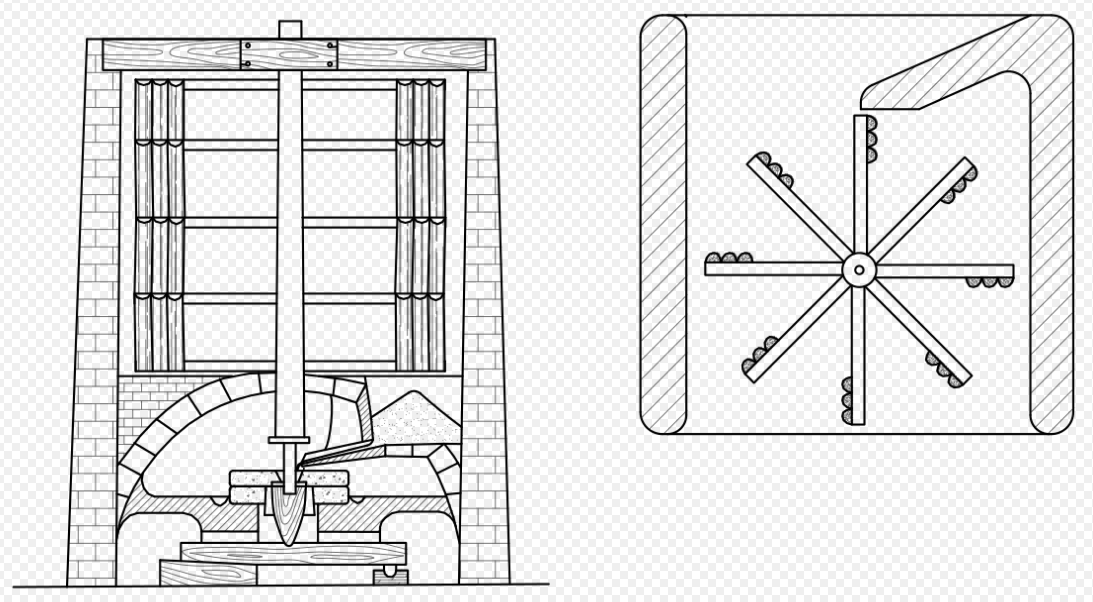 Jos explained correctly that windmills were not used in antiquity (and in the modern epoch they appeared after water mills). The main use of wind power in antiquity was for sailing. Sails were the principal propellant for long distance water travel since the time immemorial. Rowing can be used only for short distance and in battle. All sea trade was made using sailing vessels.

Edit. Since the comments express a common misunderstanding, let me explain some simple things. A long distance sea going merchant ship can be ONLY a sail ship. The reason is simple: an oar ship can take little cargo except its oarsmen and supplies for them. Hiring oarsmen or buying slaves and supplies for them would be prohibitively expensive. For this reasons, only war ships were propelled by oars. They had to stop at a shore frequently for food and rest. Archeologists find many merchant ships, like this one from the late bronze age. It was propelled by sails only.

At the time of ancient Greece and Rome, a war fleet of oar ships traveling long distance was always accompanied by a fleet of sailing merchant ships which carried supplies, warriors and horses. A trireme with 170 oarsmen could only carry 10-20 marines, and certainly no horses.

It is true that these ships were not good for sailing close to the wind. Nevertheless they were used for several millennia for long distance trade. Here is a 10-12 century AD merchant ship. As you see, little changed since the beginning of long distance sea trade. This Hanse Kogge could not sail close to the wind, and modern replicas also cannot. This was compensated by the good knowledge of seasonal wind directions which allowed overseas trade. Merchants were not in a great hurry: they waited for a right wind directions in harbors.

To be sure, sailing ships frequently had few long oars (they are called sweeps) to maneuver in harbors, and for emergency, like modern sail ships have an auxiliary motor. But this was not the main mean of propulsion.

Here are some more pictues of ancient merchant ships.

Vertical pane windmills took off in northern Europe from the twelfth century onward. The first known one was in York, later the Netherlands became a hotspot of windmill development. It appears that from the start, the cap and impeller could be rotated with a long boom to capture the wind, the assembly would then drive a vertical shaft. While "mill" is right there in the name, one important application on windmills was driving scoop wheels for drainage in the Netherlands. Dutch proverb: God created the world in six days. The Netherlands, we made ourselves. This appears to have inspired actual windmills. All this can be learned from wikipedia.

If I would put together a theory of why windpower was developed so far, I would say an important contributing factor was the drainage works: Something you could, because of the sheer magnitude of the work, not do with human or animal labor. And how does technology development work? By building something again and again and again, working out all the kinks one after another.

Another relevant theory is that a labour shortage made wind power more relevant economically. AFAIK this labor shortage was there near the end of the medieval peroid, AFAIK not in the 12th and 13th century where a lot of wind use already happened. One could check the numbers of windmills over time, to see this effect. This article claims that 'industrial' windmills (vs. 'agricultural' ones) appeared in the Netherlands from the 16th century onward.

Why always the Netherlands? Because you can't really use watermills there, because there's so little height to work with. Elsewhere, water mills where important prime movers well into the industrial age.

So why didn't these things happen in antiquity? We don't know and I'm sure that claiming one root cause on way or other would be wrong. It appears development of wind power needs these three to be present at the same time and place:

So my hypothesis is that these three simply where not present at the same time and place during antiquity. If I were to test that hypothesis, I'd look for drainage projects that can't use existing elevation differences and times of prolonged (slave-)labor shortage.

In antiquity, in Europe only the Mediterranean civilizations were capable of complicated engineering. The topography of southern Europe is different to northern Europe. There are more mountains in the south. Holland, the home of windmills, famously has no mountains or hills at all.

One result of that is that Holland is much, much windier than Italy or Greece.

Like Holland, the Romans did have to move water around, although not for land reclamation. Rather than move seawater, they needed to move freshwater from the mountains to the plain. Of course they used aqueducts to do that, and aqueducts use gravity to move water from a high place to a low place - something that Holland, without hills or mountains, is of course unable to do.

Hero of Alexandria also invented a working steam engine, but we had to wait for James Watt for common use of it. When something becomes technically possible, that doesn't automatically say it will be implemented. We'd be using thorium reactors otherwise.

First of all, there was a serious labor conflict. Roman and Greek societies were slave based. Nobody was waiting for unemployed slaves, to say the least.

Second, it was expensive technology. The people with the wherewithal to finance water and windmills had already invested that money. In slaves. There was no reason for them to finance in expensive and possibly tricky technology, with the added risk of unhappy slaves and more importantly a very unhappy electorate.

In those days that technology was complicated, difficult to operate, very maintenance sensitive and outright dangerous (both to operators and bystanders*). You needed skilled staff to operate and maintain it. Those guys were relatively expensive, both in training and salaries.

*= I did see some documentaries in which medieval replica wheeled cranes are used. Kind of giant hamster wheel with ropes and pulleys to lift heavy objects. Those cranes were really dangerous. They could very easily be overloaded and break, with devastating consequences.

Not the answer you're looking for? Browse other questions tagged technology classical-antiquity or ask your own question.

21
Why didn't the Persians make and use ballistas and other kinds of artillery?
5
Why did email use develop in tandem with the internet, rather than other technologies?
14
Why didn't the Incan Empire use iron?
11
Why was the Aeolipile not put to practical use in classical antiquity?
3
More honorable to plunder than to work for Germanic tribes in antiquity
9
Are there examples of stone age cultures living in proximity close to iron age cultures without adapting to metal use?
9
How much more productive was Aegyptus in comparison to Africa Proconsularis in classical antiquity?
48
Why did the Germans use the Enigma machine rather than the far superior "Lorenz" cipher machine?