How came the poppy be associated with WW1?

I am not from a Commonwealth country and stumbled on some Twitch recordings over the fact that on 11/12th of November, some people (Canadians) would display poppies to remember the end of the first world war.

Where has this custom to use Poppies as a remembrance item for the end of WW1 originated and how came it to be?

Origin of the symbol

The association of the poppy with the Great War is rooted in its first year, during the second battle of Ypres. Lieutenant Alexis Helmer, a Canadian artillery officer, was killed by an incoming shell in May, 1915. His friend, the unit's doctor, Maj. John McCrae, was asked to preside over the graveside service for Helmer. Soon after this McCrae composed a short three stanza poem, In Flanders Fields, the first stanza of which is:

In Flanders fields the poppies blow1
Between the crosses, row on row,
That mark our place; and in the sky
The larks, still bravely singing, fly
Scarce heard amid the guns below.

The poem became one of the most quoted poems from the war. 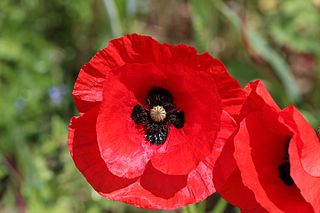 As the war ended in 1918, American professor Moina Michael, inspired by the poem, began wearing a red silk poppy as a remembrance of those who served in the war. She promoted this at various events, and at one a Frenchwoman, Anna Guérin, took up the idea and began selling artificial poppies as remembrance symbols. In 1921, she began offering them in London, and Field Marshal Douglas Haig began wearing them. From there, the tradition spread to Canada, Australia and New Zealand.

The choice of November 11 as the most common day for wearing the poppies is because that was the day the Armistice of 11 November 1918 took effect.

Not the answer you're looking for? Browse other questions tagged world-war-one customs or ask your own question.

28
How unfavorable were the terms of Germany's “surrender” in WW1?
10
How were dogs used in WW1
37
Did the Germans purposefully arrange to send Lenin to Russia to start a revolution?
3
What did the Allied WW1 propaganda for the Germans say?
8
Has there ever been a practise of duelling with bows?
54
Was WW1 generally foreseen?
9
How did the US fall behind in airplane technology from 1909-1917?
3
Placard with 3 red crosses - probably WW1
9
Was Marshal Foch predicting WW2 20 years in advance just a coincidence?