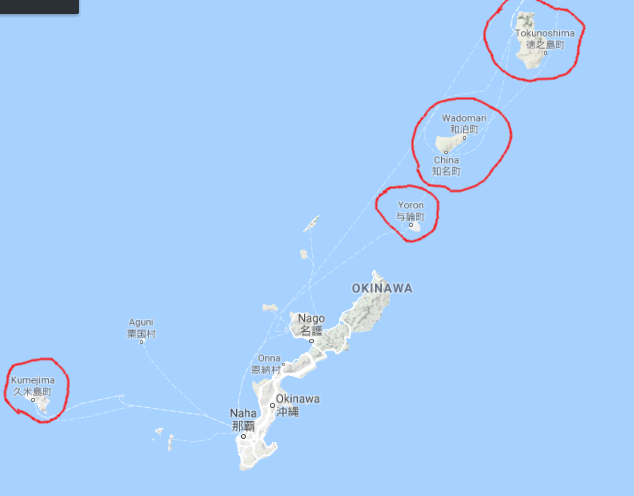 Addendum: Of course, once you have a base, other uses for it emerge. In July 1945, Halsey's Third Fleet attacked the Tokyo area, and then, as best the Japanese could tell from radio intercepts and direction-finding, moved south. This was confirmed when carrier aircraft attacked Kyushu, the southernmost main island of Japan, and Japanese aircraft were moved south for a counter-strike on the Third Fleet. But it wasn't there. The radio intercepts had been staged from the USS Tucson, which had separated from the fleet, carrying radio operators from Halsey's staff and sailed south, imitating Third Fleet's traffic. The carrier aircraft had flown from Okinawa.

Third Fleet was located again when it attacked steel plants and rail ferries in Hokkaido and northern Honshu, and the Japanese were unable to retaliate effectively. This raid sank eight and damaged four of the twelve rail ferries that carried coal from Hokkaido to Honshu, cutting the amount of coal that could be transported from the mines in Hokkaido to industry in Honshu by 80%, and crippling Japanese war production. Source: Holt, The Deceivers, pp. 769-770.

78
Why, in the US, is Japanese brutality ignored compared with the Nazi brutality in WW2?
50
Why did Hitler not invade Sweden?
29
Why did the Japanese expect the United States navy would attack the Home Islands?
17
Why did the US insist on invading Japan instead of blockading it in WWII?
8
In WW2, why didn't Japan invade Macau?
29
Why did the Allies Invade French North Africa?
42
Why was capturing the south of Okinawa necessary?
9
Were B-17s (rather than B-29s) ever used to bomb mainland Japanese territory during WW2 (at least before the capture of Okinawa)?