What’s this odd hat/crown and is it related to Baal?

So I was looking at a history book and it was set in ancient Egypt, in the temple of karnak. They were talking about how their were doors only the pharaohs and priests were allowed in, and how they decorate the temple during festivals. They would paint pictures of the gods and hieroglyphics, and I saw one of them had this odd strange cone hat/crown. 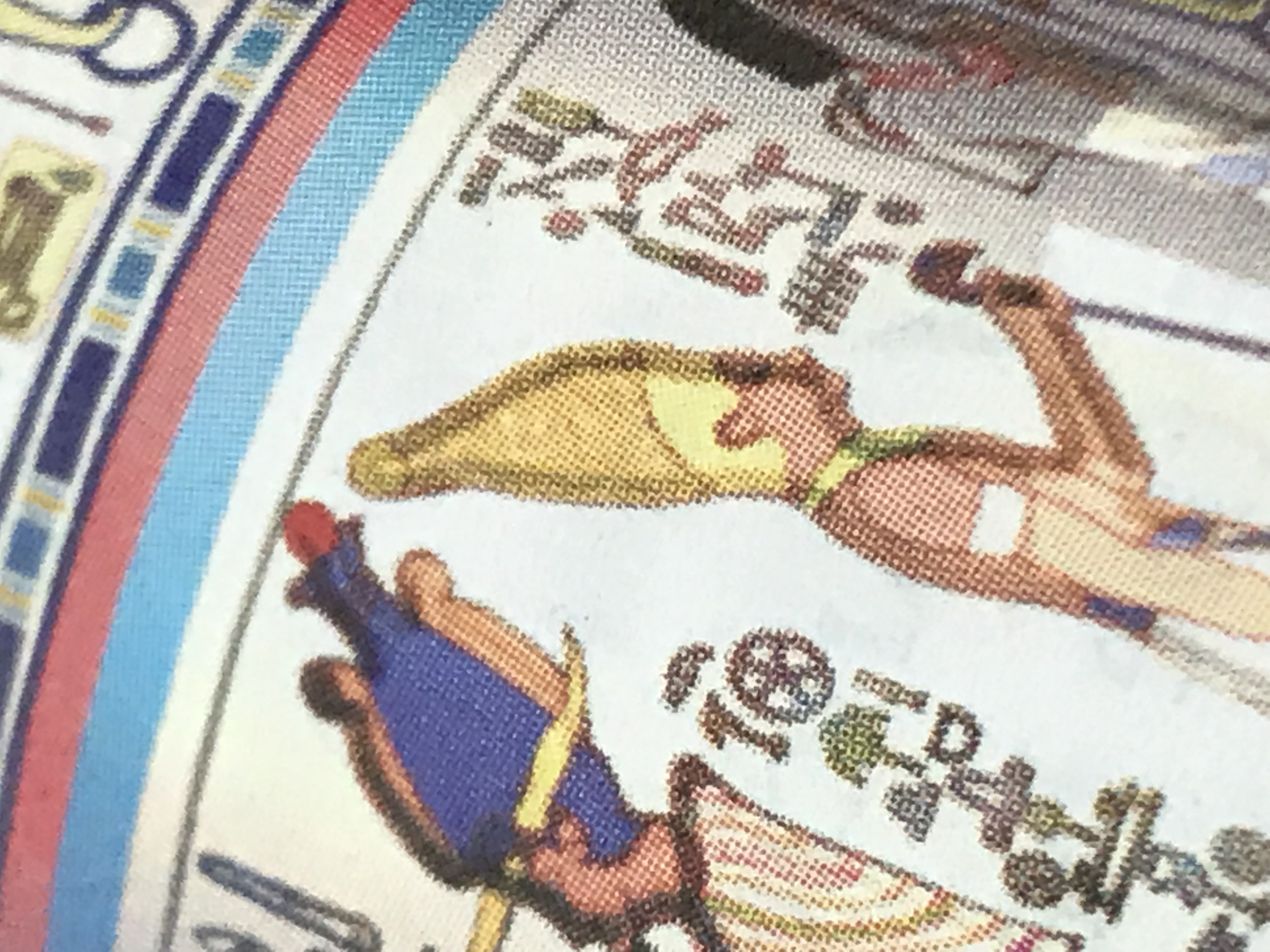 This looked odd, and also the ancient god of fertility in latter day Syria and Israel, Ba’al, had a very similar looking hat, and a hieroglyphic of the ancient Egyptian god Osiris:

This is an early statue of Ba’al: I 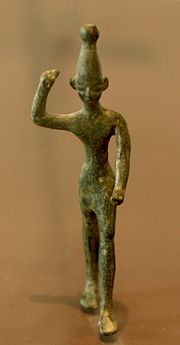 I believe Baal was worshipped during the 2nd millennium BC which was when tablets of his story were recovered.

Anything similar? Same hat? What is it?

As Ba'al is a King of the Gods and the Hedjet is certainly associated with royalty through Nekheb and Horus and the Pharaohs, it leaves little doubt in my mind that Ba'al wearing such a crown would certainly show people unknown with the god to instantly recognize him as a deity of great royal importance, just as a king could recognize another king by regalia. Since Ba'al had many different incarnations who do not have the same headdress this is the best educated guess I can give based on what I know.

I am certain the Phoenicians adopted the Egyptian Hedjet and not the other way around. The Phoenicians where known to be great traders with an impressive reach, which will almost always blend characteristics of different civilizations together (like many civilizations have done before and after their time).

Let me first clarify that Ba'al had many manifestations, local as well as empire wide. An example is Ba'al Hammon who is better known as the Carthaginian King of the Gods and especially connected to weather and fertility. This Ba'al had a very different headdress than the Ba'al statue noted in your question which is from Ras Shamra, better known in its time as Ugarit whilst still being a god associated with weather. I have included a link to Google maps to show just how far those locations are apart. For those who do not want to click it is about 3400KM or 2100M

For the purpose of answering the question I will of course focus on the Ugarit (Canaanite) Ba'al who is better known as Ba'al Hadad from the Ba'al cycle as part of the Ugaritic texts which were written in the 13th and 12th centuries BCE.

One simple reason the headdress looks familiar or is a copy of a Hedjet could have something to do with the simple fact that Egypt and Canaan where neighbours so some sort of cultural exchange is bound to happen. Which is certainly the case in Africa and the Middle-East since most of their gods evolved over time to fit an ever expanding and intermingling population. Insofar that Athena can be traced back to Inanna and Ishtar. This is partially attributed to the fact that some of these deities such as Baal and Resheph (Resheph being known from another Ugarit text "the epic of Kirta") have martial traits, which certainly appealed to the New Kingdom pharaohs military aspirations.

In the New kingdom period Egypt was at war with the Hittites and Egypt's territorial extent certainly reached well into Syria. The Met has a Ramesside period Scarab with Representation of Baal The presence of the figure of Maat and the style in which the incisions are made indicate that this example dates to the Ramesside period (Dynasty 19–20, ca. 1295–1070 B.C.).

The best know bust of a Pharaoh wearing a Hedjet would be Menkaure ca. 2500 BC h/t @John Strachan. This is a fair amount of time before the statue in your question was made. 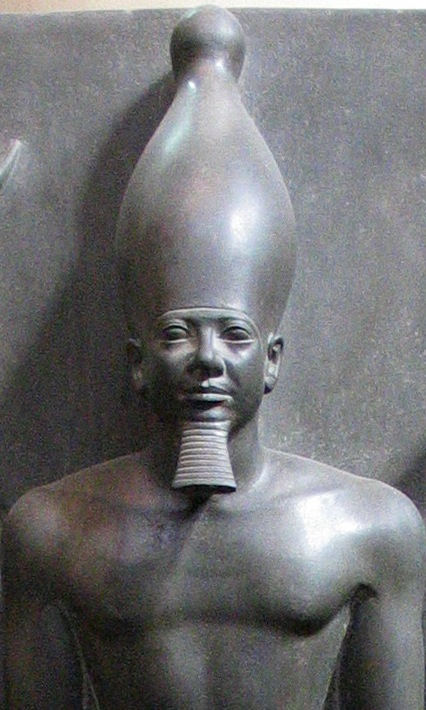 The Hedjet of Nekhbet

Looking further back to when the headdress was first mentioned, we have to go back to at least Predynastic Egypt when the local Patron God of the city of Nekheb (now known as El Kab) named Nekhbet wore the White Crown or Hedjet. The Hedjet which is also known as the Crown of Upper Egypt is very indicative of kingship and/or royalty, which is made all the clearer when it is worn by Horus and combined with the Deshret to form the Pschent or double Crown of Upper and Lower Egypt.

Note There is a hypothesized older source in Qustul, Nubia where an incense burner was found that came from 3200BCE or earlier. And also depicts a white crown.

The Hedjet might have some older roots that I simply don't have knowledge of as noted in The Politics of Trade: Egypt and Lower Nubia in the 4th Millennium BC 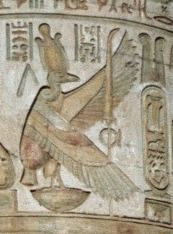 Nekhbet wearing the white Hedjet and Shen ring. This is from the Kom Ombo temple built in 180–47 BC so while not representative of a 3200BCE contemporary source, it makes a nice illustration of how they depicted her

Jane Roy, The Politics of Trade: Egypt and Lower Nubia in the 4th Millennium BC

Jill Kamil, The Ancient Egyptians: Life in the Old Kingdom 1996

Ba'al was a title of authority of many masculine deities based in the ancient Levant, primarily Phoenicia——which is Canaan in the Bible. The fact is, the Phoenician cities were traders and merchants who sailed around the whole Mediterranean. They had close ties with Egypt when it came to goods and services. If you run a search for Phoenician ivory plaques and carvings, you'll see many obvious Egyptian cultural elements. There is no mystery here. Phoenicians adopted this from the Egyptians.

Not the answer you're looking for? Browse other questions tagged ancient-history religion ancient-egypt or ask your own question.

9
Was classical Alexandria really this brutal and class-segregated?
24
How to identify this coin with a bust on one side and the letters S and C on the other side?
2
What coin/pendant is this and is it worth any money?
0
Is there a global foot race among religions on the most beautiful churches and when did this start historically?
12
Was Yahweh a god in a possible Edomite Pantheon?
11
Did ordinary people during Hatshepsut's reign know she was a woman?