In his recent biography of Douglass, David Blight talks about Douglass’s trips to England prior to the war. He explains the Douglass was well received, but doesn’t give insight into any effect this has on Parliament. The trip right after John Brown’s raid seemed like it might have been propitious for maximum effect.

I tried to find out if Douglass ever met with or corresponded with British politicians. This article http://www.baas.ac.uk/usso/frederick-douglass-in-britain/ Doesn’t give any insight.

Did Douglass ever meet with British leaders leading up to or during the war? Is there any way to know if Britain’s decision to not interfere was at all a function of Douglas?

Although Frederick Douglass' was well-received in England and attracted many people to meetings, there is little evidence to suggest that his influence had a significant impact on British policy, at least compared to other issues at the time. Nor does there appear to be any evidence that he met with any political leaders.

There is a website called Frederick Douglass in Britain and Ireland. It has pages on his visits to Britain in 1845-7, 1859-60 and 1887 but nowhere as far as I can see does it state that he met any British political leaders, though he did hear William Gladstone speak in 1887.

Among the people Douglass did meet were, most obviously, abolitionists. They not only provided accommodation at times but also arranged lectures. He met the Danish author Hans Christian Andersen, the English authors William Howitt and Mary Howitt, the Irish politician Daniel O’Connell (with whom he shared a platform and also dined), the Mayor of Cork Richard Dowden and the prominent abolitionists Thomas Clarkson and George Thompson.

Douglass was a fine speaker and attracted large crowds (there's a map here of where he lectured) but his impact on British politics was limited according to this assessment by David Turley in The Culture of English Anti-Slavery (cited by Frederick Douglass in Britain and Ireland):

Despite Frederick Douglass’s presence, anti-slavery remained a “tradition” rather than an activist policy. As a result, some American abolitionists grew disillusioned with the British public, and while certain abolitionists such as Douglass could create fanfare, this had more of a short-term impact on society.

He spent almost two years in England, Ireland, and Scotland, speaking to ever-larger audiences about the nature of American slavery and gaining thousands more converts to the cause.

Douglass also gained much publicity and support when, on booking a return ticket on a Cunard ship in 1847, he was denied a 1st class berth on account of his colour. This prompted widespread newspaper coverage, including a Times editorial which began:

The tyranny complained of in a letter signed “FREDERICK DOUGLASS”, which appeared in our paper of Tuesday, ought not to be allowed to pass in this country without some public expression of disapprobation and disgust at a proceeding wholly repugnant to our English notions of justice and humanity. 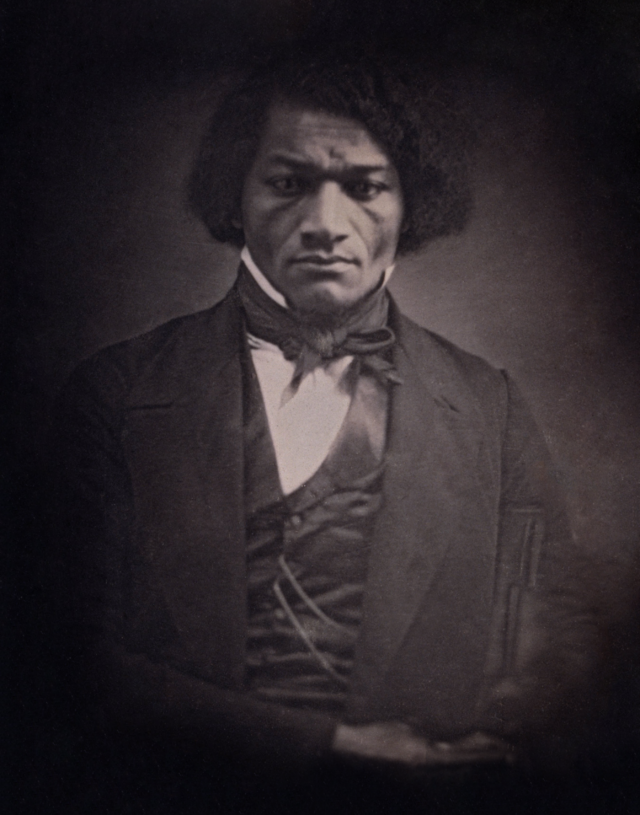 The editorial went on to describe Cunard's prejudice as "ignorant and contemptible". Samuel Cunard, the shipping line's founder, had to issue a public apology - quite an event for the time. Clearly, Douglass had made an impact during his stay.

This, and the thousands of new recruits to the abolitionist cause, may have had some influence on British MPs and hence the government but it is hard to prove this either way. Also, there is some debate among academics as to what extent the British electorate supported the Union cause. However, on his second visit in 1859-60,

Douglass did not have much success in British society. Was this because the British public were tired of American slavery? Or had society become more inherently racist? Or was it simply because Douglass failed to create controversy as he had done on his previous visit? Arguably, all of these factors had a part to play, and as a result of this, Douglass remained in the industrial north of England and Scotland, where he had been popular during his previous visit.

Nonetheless, during the Civil War, Douglass' speeches were widely reported in Britain. His 1862 appeal to the British to resist recognizing "the independence of the so-called Confederate States of America" and his connections with abolitionist friends who could get his letters and views printed in British newspapers undoubtedly had some impact, but just how much is hard to gauge.

Of greater importance, though, were economic and diplomatic considerations. The British Prime Minister, Lord Palmerston, although personally sympathetic to the South, could not ignore Britain's reliance (50%) on American corn imports. Other major issues meant Palmerston was concerned about

Europe and Bismarck, feared for the vulnerability of Canada, and desired a stable western hemisphere free of possible future Confederate adventurism.

Although he did not meeting any prominent political figures in Britain, Frederick Douglass did meet a number of prominent figures in the US, including two presidents. 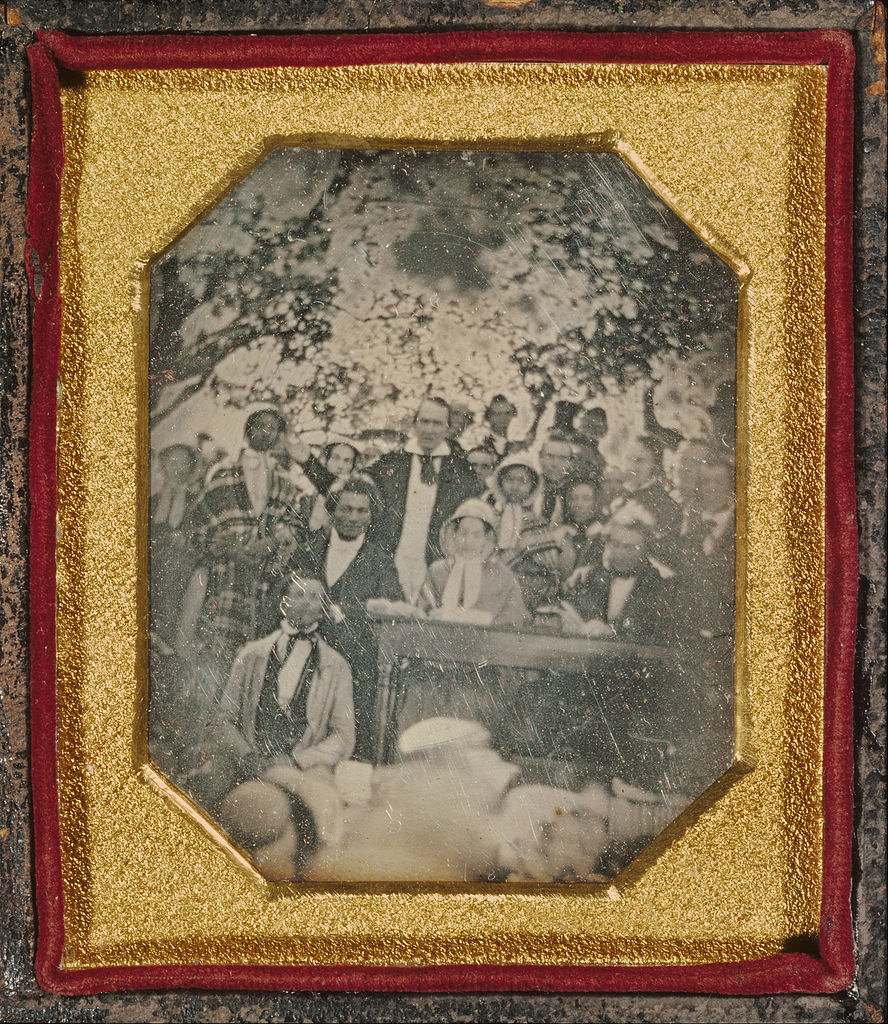 Fugitive Slave Law Convention, Cazenovia, New York. Frederick Douglass is seated at the end of the table, Gerrit Smith is standing immediately behind and slightly to his left.

Short Answer:
Fredrick Douglas spent years establishing friendships with important grass roots leaders in Britain on behalf of America's anti slavery movement. Douglass gave more than 100 lectures within the UK to persuade British public opinion. He had established important links with Britain which gave the British public a real stake in the American Abolition movement. Given it was the British public's opinion as engaged by Lincoln's/Sewell's masterful diplomacy campaign, which determined the British government's ultimate actions in the American Civil War; how could one not credit Fredrick Douglass?

Detailed Answer
It was British public opinion and not British leadership which most determined British policy during the American Civil war. Fredrick Douglass was an important bridge between the United States abolitionist movement and the very very strong British anti slave sentiment in the 1860s.

Fredrick Douglass
Douglass spent two years in Ireland and Great Britain, where he gave many lectures in churches and chapels. His draw was such that some facilities were "crowded to suffocation". One example was his hugely popular London Reception Speech, which Douglass delivered in May 1846 at Alexander Fletcher's Finsbury Chapel. Douglass remarked that in England he was treated not "as a color, but as a man.

Douglass met with the British Abolitionists as well as other grass roots leaders, while he was there. Douglass provided a link between the British grass roots and American abolitionist movement. The British during that trip purchased the runaway slave, Fredrick Douglass's freedom from his former master, making it safe for Douglass to return to the United States without the threat of being re-enrolled in slavery.

Fredrick Douglass
During this trip Douglass became legally free, as British supporters led by Anna Richardson and her sister-in-law Ellen of Newcastle upon Tyne raised funds to buy his freedom from his American owner Thomas Auld.

This gave the British a stake in what Douglass would become. In 1860 when Douglas returned to Britain he did so as one of the most famous Abolitionist Leaders in the Americas, an eloquent speaker and best selling author still with many ties to important British thought leaders.

Early in the American Civil War, when Lincoln made the war about preserving the Union, the North was under constant threat of English intervention on behalf of the south. A primary reason for Lincoln's Emancipation Proclamation January 1, 1863; was to recast the war and focus it on its abolitionist merits. This was done with an eye on the parallel diplomatic war which Lincoln's secretary of State William Henry Seward was waging to keep Europe out of the conflict. The UK had abolished slavery in its colonies in 1833, and when the American Civil war became one primarily fought over abolition, military intervention became politically indefensible domestically in the UK.

Emancipation Proclamation Was Also Foreign Policy
When Lincoln issued the preliminary Emancipation Proclamation in September 1862, England had been threatening to intervene in the American Civil War for over a year. Lincoln's intent to issue the final document on January 1, 1863, effectively prevented England, which had abolished slavery in its own territories, from stepping into the U.S. conflict.

Union and Confederacy Diplomacy
Lincoln soon also decided that converting the war into a crusade against slavery might ward off foreign intervention as well as raise the morale of Union troops by giving their struggle a moral base. Seward, however, convinced him to wait until the Union had achieved a victory on the battlefield; otherwise, emancipation would appear to be a desperate attempt to salvage victory from certain defeat by stirring up a slave insurrection aimed at destroying the Confederacy from the inside.

.
Fredrick Douglass linked the British grass roots with American abolitionism and that grass roots was the decisive factor in British Policy during the American Civil War.