How did the email client industry develop?

I am too young to have used AOL but I did start with Hotmail.

I believe there was email clients before AOL, available to anyone capable running the software and configuring their servers, but that is not what I'm interested in. I'm curious about the client that popularised it, why was it easy for the average user to get started.

I'm interested in knowing why Hotmail trumped AOL, was it an improvement in user experience like Gmail's use of AJAX? Or was it a well deployed advertising effort?

I'm also curious to learn about how did these companies plan on making money before Google decided that it was enough to leverage on the data users store in their inboxes.

Edit: the question was wrongly framed by assuming that the history of email clients started with its arrival to the web. It also assumes that certain events occurred (e.g. Hotmail trumped AOL on its own merit or Gmail having a competitive advantage due to AJAX). I can now say that I was specifically interested in the development of the Webmail markets from a business perspective.

What is an "email client" in the first place?

The Wikipedia version of History of email indeed glances over the popular aspects.

In Bulletin Board System we had email in almost closed circles, sometimes wider networks and gateways into the real internet mail-system. (Example FidoNet). That started at a fairly popular level during the 1980s. On Amiga, Atari, Mac and PC this was as text-based as it gets, often menu driven. But also the smaller niches were catered for like C64, other "home-computers". But also on the "bigger iron" there were things like mailx (not even menu driven) or elm (released in 1986, and even today perfectly usable 'UI').

But popular means graphical so that the dumbest user can point, click and make a mess of the place called internet.

Enter the Pegasus and Eudora in 1988/9. These programs were real clients with a GUI that popularised email to a really wider audience. Easy to use, nice to look at. If you were "connected".

That makes the difference here since AOL was really popularising "connecting to the net". The popular phrase for this "democratisation" of the internt was Eternal September of 1993. Like other middle men of the time (compuserve, eworld, etc) it offered internal mail-like messaging and a gateway to the real internet. But despite including a "client", it still was a middle man, and as middle men do, it was charging you as well. Making it cumbersome and any user depended on AOL to "get there".

Hotmail was not a "client" but a free service on the "real internet"; offered free of nominal charge ("free" in the sense as "if some offers you something for free on the net, you are the product being sold"). As real and direct connections to the net proliferated, direct access to a POP-mailbox got more convenient than going through the closed ecosystems of these walled garden providers like CompuServe or AOL. Some of these services were client based, but with a service on the WWW-web. Even that got increasingly superfluous in the eyes of casual users, requiring only a measly browser to get stuff mailed.

The advertising frenzy with AOL-discs produced to make landfills overflow in a scale several times bigger than VCS E.T. cartridges might have helped a bit. But the underlying infrastructure of the net available to home-users and adopted in businesses made the change much more attractive. Dial-up only ended when DSL came into numbers, so the change-over took from 1993–2000 in most developed areas.

For a while, many people had the impression that in order to "go online" one needed AOL, a reason deduced from watching TV or opening one's physical mailbox in front of a house (Youtube: AOL Commercial Video). But hotmail capitalised on being a viral campaign on the net itself:

Initially, each Hotmail message arrived in someone’s mailbox mentioning the words in the signature of each email: “Get your free email at Hotmail” at the bottom. By clicking on the word Hotmail, the recipient was taken to Hotmail’s home page where the free e-mail service was explained. Back in the nineties most computer users paid for Internet service which included one e-mail address. A big benefit of having a Hotmail e-mail address is the fact that subscribers can access their account from anywhere in the world, instead on their home computer. And the fact that there are no extra costs for each extra email address, Hotmail’s approach resulted in thousands of sign-ups each day.

So for Hotmail, this viral approach was extremely cost-effective and successful. While one of Hotmail’s competitor spent $20 million to attract less than half of Hotmail’s subscribers, it spent only $500,000 over a 2 year period to gain 12 million subscribers. 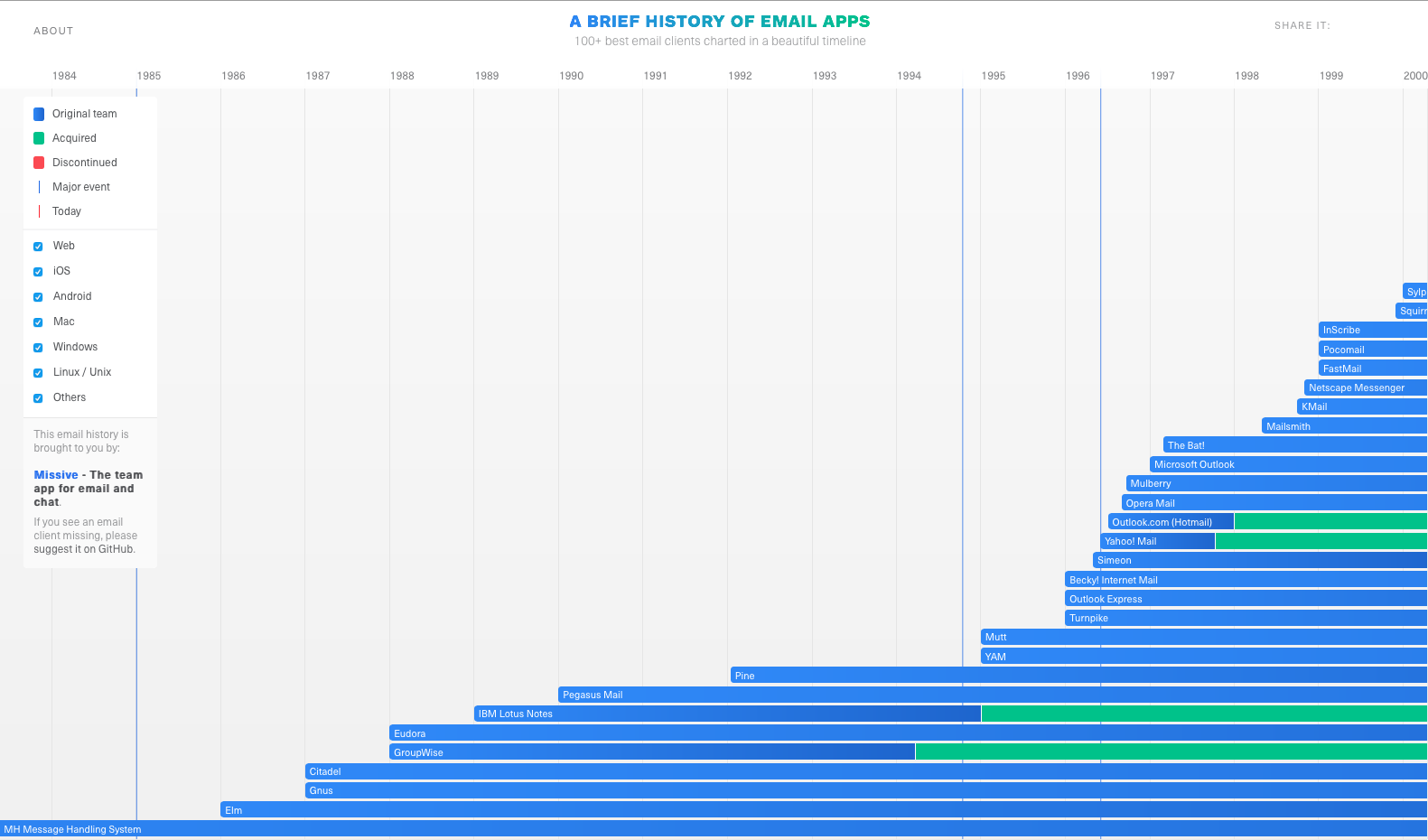 A BRIEF HISTORY OF EMAIL APPS

and the volume of mails sent, expressed in changes of volume:

The History of Email

Of course, the total number of mails just keeps on growing, as ever:

The Shocking Truth about How Many Emails Are Sent

Oh yes. I'm old enough to have witnessed everything. First a dial up account with forum software. No internet as yet, you connected to a bulletin board. A bit later a dial up account without graphics (bloody expensive back then) and Internet. Connecting through Trumpet Winsock. Speed was, if I recall, 14.4 k. When I got my Internet account, one of the first in the country, I had to go to a university for a day to get trained in using it.

My email client back then was Pine. My browser was Lynx. I would go online, look for something quickly - surfing was expensive! - download that page and read it offline. Google wasn't created as yet. Yahoo was barely there.

How did they make money? They simply charged you for it. Yahoo tried a different approach: they allowed free searches with their search engine, but if you wanted a good listing, you had to pay for it.

That's where Google jumped in. Nobody liked the paid search results of Yahoo. First of all, you knew it was paid for. So how reliable was it? Google also had paid links, but far more discrete. A few small ones above the page, and a cheaper version on the right hand side. Good enough to get attention, and far less irritating than the Yahoo ads. That's what killed Yahoo - and very fast. Within a couple of years Yahoo dropped from the number one spot to one of the many.

The history of e-mail is longer and deeper than you have given it credit for, and the examples you mention are from different eras of its development.

Most of the key developments are not in the clients as such, but in the hosting - where is the e-mail stored, and what other services is it bundled with? Alongside that are wider developments in how users connect to networks, the protocols those networks run on, and the types of user interface available.

Through all of this timeline, standalone client programs have been developed for connecting to the various proprietary and standard protocols. Some were bundled with other products; some were the first or only choice for a particular platform; some were heavily marketed; others simply came and went unnoticed except for a few loyal users.

Not the answer you're looking for? Browse other questions tagged industry internet or ask your own question.

2
Did the cold war affect the development of the internet?
27
When planning Barbarossa, did Germany conceive of the Soviet migration of heavy industry?
11
When did Soviet authorities first plan/conceive of migrating their industry if war broke out?
30
Where did the archived discussions in Google Groups come from?
2
Did the Soviets lack ball bearings in WWII?