Does the HMHS Britannic wreck still have a grand staircase or any staterooms?

Does the wreck of HMHS Britannic still have a grand staircase or any staterooms or were they all removed prior to being converted into a hospital ship?

RMS Britannic was initially requisitioned for use as a hospital ship on 13 November 1915. She was then renamed as HMHS Britannic and underwent a refit. From the Wikipedia article:

In the interior, 3,309 beds and several operating rooms were installed. The common areas of the upper decks were transformed into rooms for the wounded. The cabins of B Deck were used to house doctors. The first-class dining room and the first-class reception room on Deck D were transformed into operating rooms. The lower bridge was used to accommodate the lightly wounded. The medical equipment was installed on 12 December 1915. 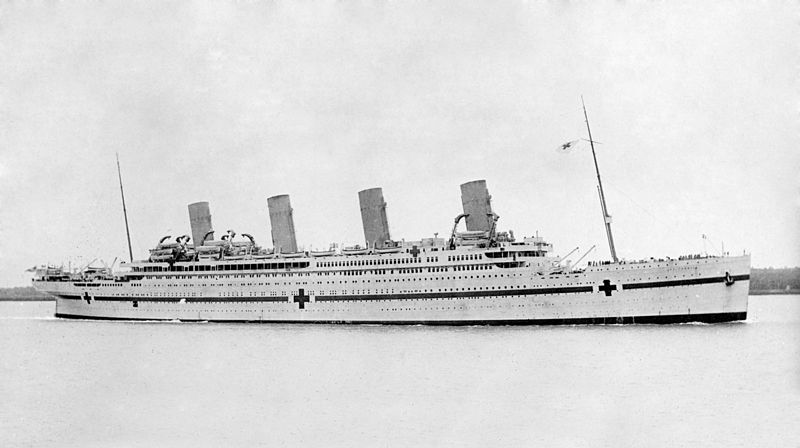 On 12 December 1915 HMHS Britannic was declared fit for service, and she then served until 6 June 1916 when she was released from service and returned to Belfast to be refitted once again as a passenger liner. At this point she had completed three voyages to and from the Mediterranean.

In the middle of that refit, on 26 August 1916, she was requisitioned again for service as a hospital ship. She sailed for the Mediterranean less than a month later, on 24 September 1916 and remained in service, completing a further two voyages, until she was sunk on her sixth voyage on 21 November 1916.

Details of her voyages as a hospital ship, and some descriptions of the ship as she was fitted out during her war service can be found on the Hospital Ship Britannic web site.

Also on that site, you will also find a page dedicated to the wreck of HMHS Britannic. It notes that, during the exploration of the wreck by Robert Ballard's team:

The weather cover over the glass dome of the forward Grand Staircase was found nearly intact. The dome was found broken, but there was still evidence of the white glass in some places.

The forward Grand Staircase formed part of the first class entrance to the ship. It was located aft of the first funnel in the picture above, and was designed and built as part of the structure of the ship. As such, it would not have been removed during the refit. However, much of the staircase itself was built from wood, and so it is unlikely to have survived (although some wooden structures have been found on the wreck).

The staterooms would certainly have remained, although many of the fixtures and fittings would probably have been removed. Given the short turnaround times of each refit, and the urgency involved, its is likely that only the minimum amount of re-design work required to fit out the ship for her intended function would have been carried out.

Unfortunately, even though the wreck lies in relatively shallow water (about 120m), and is well within range of technical divers, there has been only limited exploration of the interior of the ship. The wreck has been designated as a war grave, and permission from the governments of both United Kingdom and Greece must be secured ahead of any penetration dives.

The person who is most likely to know the answer is the author Simon Mills, who 'technically' owns the wreck.

As such, he would doubtlessly be aware / involved in any [official] dives which have explored the section of the wreck where the forward first class 'Grand Staircase was known to have been located. Accordingly, he would be the best person to know whether any of the Grand Staircase is still in 'situ'.

Surprisingly, the wreck is in very good condition (its smokestacks still exist which is rare) and a lot of the visible woodwork remains in place. Also, it should be remembered that the staircase was constructed from mature oak, which is a very dense wood. Oak can resist (for longer than softer woods like pine) the attack from marine boring animals and decay from seawater. Thus, it is possible that some parts of the Grand Staircase still exist.

Not the answer you're looking for? Browse other questions tagged 20th-century ships or ask your own question.

-2
Why are there no detailed photos from interior of HMHS Britannic wreck?

12
What is Poosball, an early 1900s women's team sport?
30
Are there any documented examples of wooden ships which were in active service for 100 years or more? If not, what is the longest?
4
Journeys from Gujarat in India to Dare es Salaam in what was then, Tanganyika in 1925 and 1948
2
How was the Washington Naval Treaty enforced?
9
Couldn't Japan have solved the problem of drifting at sea?
0
Has there been a recorded account of a cabin boy inspiring mutiny on board a ship?
6
What methods were used for onboard ship communication during WW2?
6
When (and where) did public polling start taking place on topics other than elections?
27
Whaling ship logistics