Did the Inca Empire know about the Polynesians, or vice versa?

Pre-Columbus: There's some evidence that Polynesians traveled back and forth between Oceania and South America before the arrival of Europeans. The sweet potato was introduced to Polynesia from South America around 700 CE, though it's not clear if it was imported, or if it somehow floated across the ocean. Other clues comes from linguistics and genetics.

Is there any evidence that the Inca Empire knew about the Polynesians? Wikipedia implies that the hypothetical contact happened hundreds of years before Inca times. There likely weren't any Polynesian explorers in South America during the colonial period. Still, the Incas had a strong oral tradition, so they might have known.

Post-Columbus: The Inca Empire survived until 1572, though it was only a rump state after the 1530s. This means that the Inca Empire was still around when the Europeans reached Polynesia (see this and this). Did any information about the Incas bleed into Polynesia, or vice versa? Obviously, modern Polynesians and Andeans are aware of each other, so I'll set the question's end date at 1572.

Thor Heyerdahl proved it was possible with the Kon-tiki raft to sail from South America to Polynesia. Later he did a similar experiment to see if Egyptians could have crossed the Atlantic with boats build out of papyrus.

More precisely, he didn't really prove it was possible: he proved it was not impossible. That doesn't want to say it was likely, and it certainly doesn't mean there was regular traffic between those destinations.

Thor had the advantage of knowing it was possible. He knew Polynesia existed. He knew the exact distance. He had the best and accurate weather forecasts. He had a radio on board, in case of trouble. He had modern life rafts and the knowledge help would be on the way, if need be.

Those advantages the Incas / Polynesians didn't have. For them it was a highly dangerous journey into the unknown.

That's why I think it may very well have happened, but on an incidental basis. I doubt very much if Polynesians and Incas knew of each other's existence, it certainly wasn't common knowledge preserved in legends. If more or less regular traffic existed, that would have been mentioned.

I think - but this is purely my own opinion - that if it happened, it was a one way trip. Sailing with rafts is far too dangerous to make a return voyage. All of Heyerdahl's rafts were after their voyages no longer in a condition to even consider sailing back.

This is unproven. There are several major claims of possible prehistoric contact between Polynesians and the Americas.

The Polynesian culture was the more maritime one. It reached as far as Easter Island with certainty, and why would it have not gone farther? The Inca did have seaworthy rafts but only for coasting. If Topa Inca Yupanqui's sea voyage truly occurred, and somehow reached Easter Island, then the answer is yes.

This article by Paul Wallin in Nature, July 2020, explains a recent paper by Ioannidis et al.

Their genetic study makes the case that South Americans did sail to the Marquesas Islands in the late 12th century, where they encountered Polynesian people.

The authors made the notable discovery that an initial admixture event between Native South Americans and Polynesians took place in eastern islands of Polynesia around ad 1150–1230. 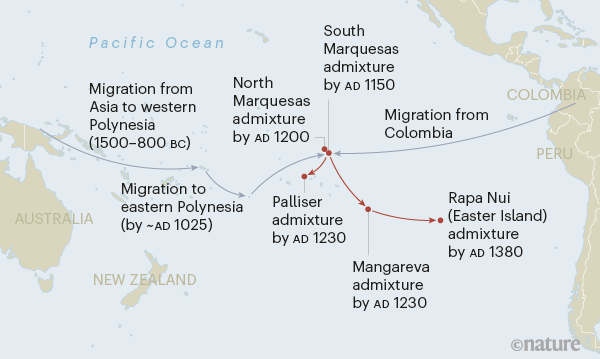 Interestingly, the paper suggests that those South Americans sailed from Colombia, not from Peru. It doesn't demonstrate a return journey either, so the Incas most probably remained unaware of the existence of Polynesians. There is no evidence of regular contact:

The authors propose that the Native South American genetic signatures they found [in Polynesians] were probably the result of a single ancient contact.

Even if they don't completely rule out alternative scenarii:

Ioannidis et al. suggest that further genetic studies will be needed to address such alternative hypotheses.

The most obvious evidence of contact, curiously enough, is not mentioned here. There's a friggin' Inca imperial wall in Easter Island. There's Andean DNA in the Polynesian bloodline but not vice-versa.

Not the answer you're looking for? Browse other questions tagged exploration south-america inca precolumbian-contact polynesia or ask your own question.

6
How did Diego Gutiérrez know the boundaries (shape of the Americas) when he drew the 1562 Map of America
7
How does finding a Franklin ship change what we know about the expedition?
14
Why didn't the Incan Empire use iron?
24
Did any European ever witness a major Inca religious festival?
19
To what extent were Polynesians in contact with one-another before European contact?
7
Was there contact between the Inca, Maya and Aztecs?
2
Is there any short summary of John Rowe's theory of horizons about the Incas?