What is the best book to learn about medicine in medieval times? (research for a novel)

I am writing a novel where the main character is a healer in medieval times / a low-technology environment. Most of his work would involve field medicine, or treating people generally as a village healer.

I don't know anything about medicine myself, so what is the best source for me to learn about things like medieval first aid, stitching and closing wounds, herbal medicine, and other medieval medical practices (like stopping infection or the spread of disease)?

This is a fantasy novel so there's no specific time period.

Notes about the time period/medical practices

Thank you for all your suggestions.

If it's primary sources you're looking for, a good place to start is Medieval Medicine: A Reader by Faith Wallis (2010). According to one review by Linda Ehrsam Voigts of the University of Missouri-Kansas City,

Access to original texts has been, until now, largely confined to specialists. Wallis performs the great service of making these writings accessible through accurate and graceful translations.

It has an index of topics, obviously useful for finding the specific medical practices you need for your book.

Another useful resource is Nancy G. Siraisi's Medieval and Early Renaissance Medicine. In addition to an extensive bibliography (including a list of primary sources which have been translated into English), it also has illustrations showing, for example, surgical instruments and medieval illustrations of people undergoing treatment for a variety of ailments. Googling, for example 'medieval medical treatment', will also give you plenty of images.

As you have indicated a specific interest in herbal remedies, you should havea look at Medieval Herbal Remedies: The Old English Herbarium and Anglo-Saxon Medicine by Anne Van Arsdall which

presents for the first time an up-to-date and easy-to-read translation of a medical reference work that was used in Western Europe from the fifth century well into the Renaissance. Listing 185 medicinal plants, the uses for each, and remedies that were compounded using them...

There is more information on this in the article An illustrated Old English Herbal. The original manuscript can be seen online: Cotton MS Vitellius C III, courtesy of the British Library. Below is a sample image. 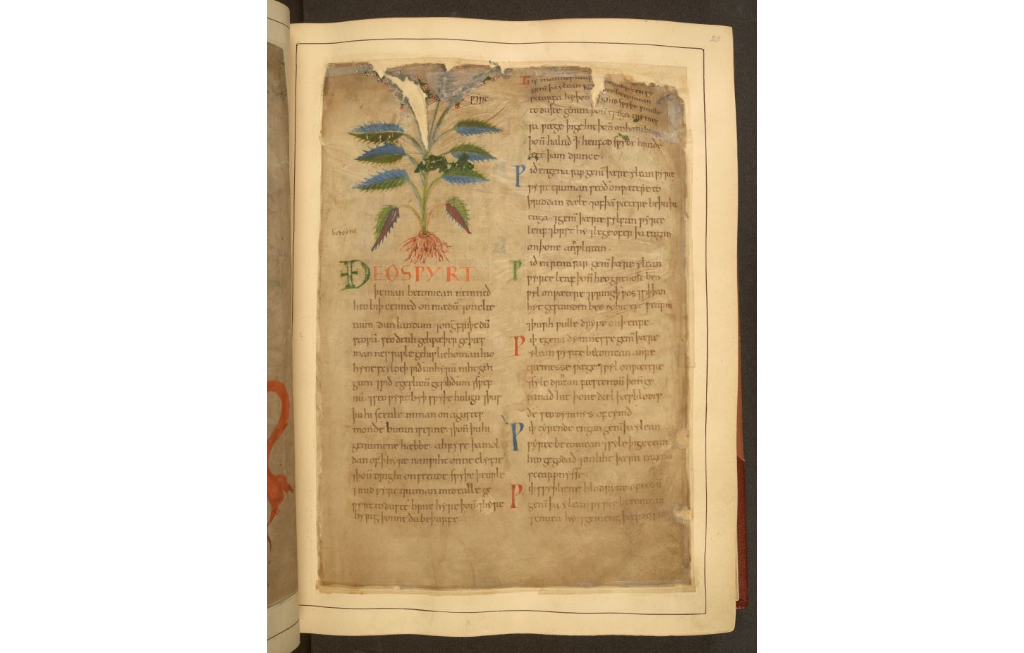 There is a (downloadable) PhD thesis by Emily Kesling, The Old English Medical Collections in their Literary Context which has a section on The Old English Herbarium, among other primary sources.

A few further points of interest which may also give you some useful context:

1. The use of prayers / chants / incantations to accompany the 'physical' medicine was common. See, for example, here and also Wallis (cited above).

2. Wise women. Although your character is male, you might have a look at the role of wise women as they were among those used by

The role of women could be controversial and many peasant women were actually persecuted for practicing medicine.

3. In folk medicine, the doctrine of signatures was often

associated with the work of herbalists and wise women, it drew upon the belief that natural objects that looked like a part of the body could cure diseases that would arise there.

4. Popular or folk healers did not operate in isolation. These

There certainly is not the one best book on this.

Modern historical books may even be less plagued than medieval books on the topic, but there will be a considerable difficulty awaiting you:

the setting described is "a village" but most of the primary texts we can study are really high level science texts in comparison. Oral lines of traditions are the ones most frequently cut.

We know of ancient medicine from antiquity (VN), presenting us a huge corpus of medical writing, which was the basis or did form most of the 'proper' medical knowledge in medieval Europe. There is clear continuity in this knowledge of the learned strata of society, building up and "standing on the shoulders of giants". But we also know that a substantial amount of practical knowledge was actively disregarded, discarded or which was simply lost. Mainly those of mid-wives, witches, and those farmer's almanach level practices of which we only have hints at in the established texts.

And especially the physical methods were widely known and in some cases practised for thousands of years before writing came along (eg Trepanning).

That would men to set the cut-off date for such a novel during the renaissance, but include everything we know of from before. Such traditional medical knowledge should be the main focus, while the academic medicine might have been indeed trickling down into the villages, but access and availability might have to be considered.

In terms of principal systems to understand, the foremost would be the corpus hippocraticum as completed by Galen which gave us the system of humoral pathology (4-bodily juices). Those need to be in balance and harmony. This is a departure from magical thinking in medicine, but not a complete one: Medicus curat, natura sanat, deus salvat. (The medic acts, nature heals and God saves).

The deus part might read as a Christian addition, which it is, but in pre-Christian Europe this were simply other gods and deities to appeal to. Read that as shamanistic practices, praying and sacrifices still play a big role throughout.

In terms of diagnostics you'd have to emphasise acute and meticulous observations, like uroscopy, pulse diagnosis (PD), bloodletting (BL), coproscopy (CS), and the same for sweat and sputum.

Traditional healers had more at their disposal than just herbalism, but the academic basis for this would be found in works like De Materia Medica. Keep in mind that this is Mediterranean in principle and the higher up North the setting is chosen the less applicable some plants are, as they do not grow there but have to be traded, again a potential problem in "villages".

Perhaps a better intersection of academic doctors and traditional healers might be found in monasteries, where clerical monks recorded their experience on a level somewhat 'below' (CM)

Marcia A. Kupfer: "The Art of Healing: Painting for the Sick and the Sinner in a Medieval Town", Pennsylvania State University Press: University Park, 2003.

(BL): Peter Brain: "Galen on Bloodletting: A Study of the Origins, Development and Validity of his Opinions, with a Translation of the Three Works" K. Codell Carter: "The Decline of Therapeutic Bloodletting and the Collapse of Traditional Medicine", Transaction Publishers, New Brunswick, London: 2012.

As it was classified as "fantasy novel", you really have a huge range of options or inspiration to draw from. If you also look at Byzantine, Arabic, Indic and Chinese medicine. A traveller or trader might bring in some knowledge from there. Parallele devlopment. Besides herbalism, you might also use minerals and metals, like arsenic, quicksilver (mercury) special salts, 'stange' animal products etc. Just like traditional Chinese medicine, ayurveda and so on.

Even when going for strict "historical accuracy" in 'good practice medicine' you might be free to include things that would seem like outright quackery. Medics of all times have had strikes of genius for treatments and at the same time did things we would have to classify as pure butchery. Just think of how until recently we had tonsillectomies done routinely or that grandmas still tell you to keep your throat warm so as to not 'catch a cold', and that we indeed have no cure for the common cold.

A sometimes dreadful, or hilarious, read for that:
J.C. McKeown: "A Cabinet of Ancient Medical Curiosities. Strange Tales and Surprising Facts from the Healing Arts of Greece and Rome", Oxford University Press: Oxford, New York, 2017.

In my opinion, the present state of medical knowledge represents the complete discovery of the art, for it is able to give precise instructions about the nature of diseases and explain the essential aspects of their treatment (Hippocrates Places in Man 46).

Many aspects of treatment in antiquity were very stressful and unsophisti- cated (Pliny Natural History 26.16).

It is not easy to explain surgical procedures in writing (Hippocrates Joints 33).

You should clearly understand that bandaging a broken jaw efficiently does little good, and bandaging it inexpertly does great harm (Hippocrates Joints 32).

In seeing the desired cut-off point for knowledge, a great study of writings would be Paracelsus. Deviating from humorism and criticising it loudly, covering a broad range of theory and treatments.

For starters, you will not understand Medieval Western European medicine, particularly the popularity of phlebotomy (ie blood-letting), until you understand hemochromatosis, its frequency in NW Europe, and that the only effective treatment even today remains phlebotomy.

Contrary to the note in Wikipedia, hemochromatosisis one of the most common congenital diseases in those of Western European stock, approaching 10% incidence in some Irish and Frisian populations. It is possible that the absence of iron-rich macrophages in hemochromatosis sufferers provides increased resistance to certain bacterial infections which feast on those - such as particularly the bubonic plague. However this remains speculative as far as I know.

For all those who probably don't believe a word of the above, Here's some more background on the disease (my emphasis):

From my comments below:

I well understand the dangers [of overdoing phlebotomy] - and psychologists understand that the random positive reinforcement is the most powerful kind, inducing a high - hence gambling addiction. None the less, one cannot understand Medieval Western European medicine without an understanding of hemochromatosis - because upwards of 10% of many national populations were afflicted, These days if one's GP can't be trusted, just become a regular blood donor and never worry again.

Not the answer you're looking for? Browse other questions tagged middle-ages medicine or ask your own question.