What are the earliest written accounts of Sub-Saharan Africa from the outside?

I've been researching African ethnography recently, and this path has led me to looking for early accounts of Sub-Saharan Africa. That they come from non-residents likely goes without saying, but I specify this as to not be Eurocentric.

I've done a bit of research to try to find out what and where these accounts may be, but I'm coming up empty-handed. So if I were to visit an academic library for the earliest, surviving written accounts of Sub-Saharan Africa, what would the title/author of these books be?

According to the UNESCO General History of Africa (vol 1),

The ancient authors' information was scanty and fitful, especially in relation to West Africa. Herodotus, Manethon, the Elder Pliny, Strabo and some others tell us little more than of occasional journeys or raids across the Sahara, or of maritime tentatives down the Atlantic coast, and the authenticity of some of these accounts is often the subject of lively dispute among modern scholars.

However, we're on firmer ground with Periplus of the Erythraean Sea which dates from around the middle of the 1st century AD and mentions Rhapta, believed to be on the coast of modern-day Tanzania. The author is unknown but the was probably from north Africa. On Rhapta, this source says:

there is ivory in great quantity, and tortoise-shell. Along this coast live men of piratical habits, very great in stature, and under separate chiefs for each place.

Claudius Ptolemy (c. 150 of our era, though the version that has come down to us seems to relate more to c. 400) and of Cosmas Indicopleustes (647) are still major sources for the early history of East Africa.

Among Ptolemy's maps was this one below: 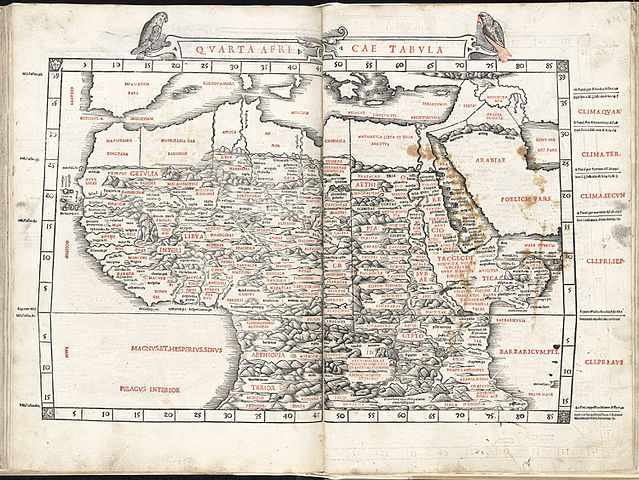 Ptolemy, who was Greco-Roman but lived in Alexandria,

gave to the western coast of Africa, as far as what is now called Sierra Leone, considerable detail in regard to names and natural features

Cosmas Indicopleustes was a Greek merchant from Alexandria. He is best known for travelling to India, but he also went to Eritrea (which is sub-Saharan Africa):

He happened to be in Adulis on the Red Sea Coast of modern Eritrea at the time (c. 525 AD) when the King of Axum was preparing a military expedition to attack the Jewish king Dhu Nuwas in Yemen, who had recently been persecuting Christians.

For most of sub-Saharan Africa, though:

There is a huge area where until the fifteenth century the written source is non-existent; and what is a second-rate Arabic source for, say, the Maghrib, takes on prime importance for the Niger Basin.

Originally, the question asked for a non-African source, which I interpreted as an account from someone who originally lived outside Africa. The question has now been refined to include any accounts outside of sub-Saharan Africa, which would include early Egyptian accounts and others such as the Egypt-dwelling Greek/Roman sources in Lars's answer. I won't attempt to capture those, so what follows focuses on the earliest accounts from sources located entirely outside Africa.

The earliest account of Sub-Saharan Africa by a non-African that I can find is Kitab al-Budan by Ya'qubi in 872 CE.

One of the English translations you might look for is The Works of Ibn Wāḍiḥ al-Yaʿqūbī. Here is an excerpt:

Whoever travels south by road from Sijilmasa toward the land of the Blacks,766 (inhabited by) various black tribes, travels through wasteland and desert for a distance of fifty days' journey. One then encounters a group of Sanhaja called the Anbiya in the desert; they have no fixed dwelling.

766 Arabic ard al-sudan: for Arabic geographers the term covers all of sub-Saharan Africa, not merely the modern Sudan.

Trade in the Ancient Sahara and Beyond claims that the first accounts to the outside world of sub-Saharan West Africa came from Muslim traders. It mentions Ya'qubi as a source, so he may be as early as it gets.

16
How long would it take to travel from England to western Africa in the late 1890's?
2
What distinguished the Republican Party of Liberia from the True Whig Party?
8
Are there any known instances of sub-Saharan African democracy before European colonialism?
11
How much contact did Sub-Saharan Africa actually have with the rest of the world since the beginning of civilization?
4
In general, what was the level of technology like in central Africa, just before the scramble for Africa?
26
Are there records of US slaves who practiced Islam following their import from Africa?
13
Do we know anything in detail about the effect of the black death on Sub-Saharan Africa?
2
Did the slave trade from Africa to the Middle East decline during the 20th century?
2
Are there any surviving historical written records about Black individuals in Sub-Saharan African languages?