What was the image of Jhwh before it was almost erased from history?

Clay tablets found in Mesopotamia tell us that Adam was an earth god. In Genesis Adam was demoted to human status probably to make a monotheistic text possible.

Did Jhwh have an image (idol) before and what was it?

And if Jhwh had an image, could Eve and the serpent (possible the Proto Canaanite mother serpent in Unas’s Pyramid texts) combined be excluded from being the imagery (or consort Astharte) of Jhwh?

(Reason for the second part of the question is that the name Eve is an analogy for both ‘sky’ and ‘snake’ in Ancient Semitic languages and Eve may have been a form of the sky goddess (Astharte?). Astharte Queen of heaven would become Mother Eve which is an analogy of Mother Serpent.)

I would also like to add that the image provided in LangLangC’s answer has a female sitting on a lion’s throne. If the figures on the left of the seated female are two lions, there might be a word pun on her name in שתי אריות as an analogy of Astharte/Ishtar. Possibly the Akeru are depicted here in a Semitic understanding of the two lions of the horizon in Egypt.

Against this background it is interesting to interpret Jhwh as J(hand in the meaning of ‘worshippers’ as the Ka hieroglyph shows two arms raised in worship. And ‘Hwh’ as ‘sky’ giving a reading of ‘worship the sky (god(dess))’. Jhwh would be an epithet that remained after losing the original name and syncretising Astharte and El, which might equal Adam and Eve (earth and sky). But I don’t want to answer my own queation, just would like to know if Eve can be scientifically excluded from being the name origin of Jhwh before the Genesis version of Jhwh appeared?

There was not the image of YHWH.

But there were several images, depictions, idols, some of them survive.

This is him in happier times, still not divorced, with his lovely wife:

The name of his consort is/was quite certainly Ashera.

As for describing the above picture, with alternative explanations: 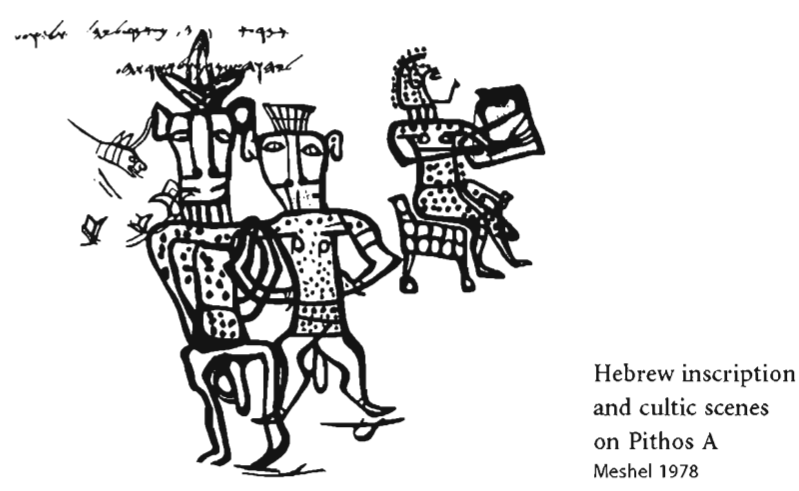 The Phoenician and Canaanite motifs are familiar, and they are not really unexpected if we are dealing with "syncretistic" folk religion, as is certainly the case here. But who are the three figures — so rare in Hebrew art that these are almost the only intact examples that we have (the others are on this same storejar; below)?
When I first saw these painted storejars with Meshel some 25 years ago, I was stunned, both by the scene and by the Hebrew inscription above it. I soon wrote two articles (1982, in Hebrew; 1984) arguing that the two figures to the left represented the Egyptian dwarf-god Bes (see p. 134), who is often portrayed bow-legged, with a leonine head and a crown, wearing a spotted leopard skin. The left-hand figure is apparently male, whether the dangling thing between its legs is a phallus or the tail of a leopard skin. The right-hand figure, however, seems to be female, since it has breasts. Odd as that may appear, it does not pose a problem, since Bes is an androgynous deity and can appear as either male or female. In any case, Bes is an apotropaic deity, one who "turns away" bad luck, associated particularly with music, dancing, and celebrations in the cult. He was very popular, both in Egypt and throughout the Levant (even in Mesopotamia). Small faience Bes amulets are quite common in 8th-7th century B.c. Judean tombs, so his presence in cultic art at Kuntillet 'Ajrûd is not at all surprising. Some scholars, however, have gone further than I and would identify these two linked figures not as Bes representations, but rather as "Yahweh and his Asherah," as we read on some texts.
The seated female figure to the right is even more intriguing. Who is she, "Our Lady of'Ajrûd"? I proposed in 1982 to identify her with the goddess Asherah, who is of course mentioned specifically in the Hebrew texts at the top of the scene. My reasoning first was that this semi-nude, bare-breasted female was not likely to be an ordinary Judean housewife or a worshipper, much less a priestess or a queen, that is, any human female. But the clincher for me was the "lion throne" on which the figure is seated. This is not a familiar side chair. Note the splayed, claw-like feet; the "paneled" sides; the slightly tilted back; and the fact that the figure's feet are dangling in the air, suggesting a missing footstool.
Now it happens that "lion thrones" like these are very common in Ancient Near Eastern art and iconography, stretching back hundreds of years before Kuntillet 'Ajrûd. And as I discovered, "lion thrones" are always associated with deities or kings — never with ordinary human beings. The rationale is that the lions, symbols of ferocity, carried the throne on their backs. These "sacred" lions are often represented as cherubs — potent symbols of the divine presence and power — that is, with wings. And in nearly all cases, there is a low footstool in front of the throne.

These depictions are just a variation, YHWH, God of Edom looks a bit different

It can further be argued that the syncretism present in the development of YHWH usurping all the powers and characteristics of the other gods that any Ba'al or El figurine might count, despite the names.

Another angle are coins: 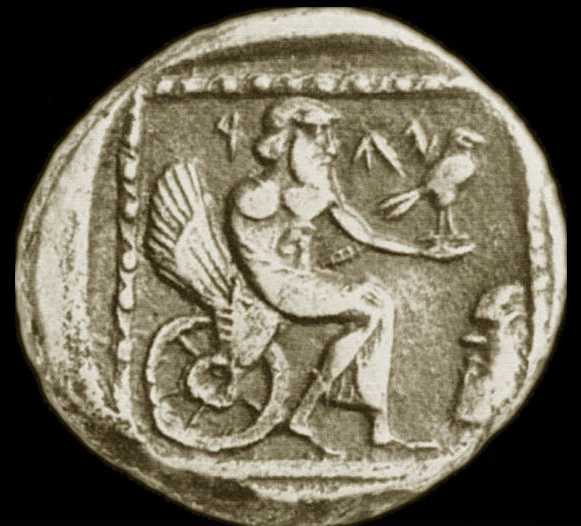 (Darwin Profile On Ancient Coin, notice that the inscription is not YHWH, but an older or parallel form of the name. The same can be said eg of the YHWH worshippers of Elephantine that also do not the four letter word. Nevertheless British Museum Catalogue, Palestine XIX 29; Meshorer / Qedar 1999, 15, is universally described as being Jahwe/YHWH. Date late is late-Persian Yehud.)

Quite an early find is dated to ~1000 BCE iron-age, Jerusalem, (and doesn't really convince my):

On the origin of the name:

And while it would be wrong to jump to the conclusion that “Israel” as known from the period of the Judges or the early monarchy was already in existence in Edom at this time, one cannot help but recall the numerous passages in later Biblical tradition that depict Yahweh “coming forth from Se'ir” and originating in Edom. The only reasonable conclusion is that one major component in the later amalgam that constituted Israel, and the one with whom the worship of Yahweh originated, must be looked for among the Shasu of Edom already at the end of the fifteenth century b.c.
Donald B. Redford: "Egypt, Canaan, and Israel in Ancient Times", Princeton University Press: Princeton, 1993.

This is not the big consensus however. 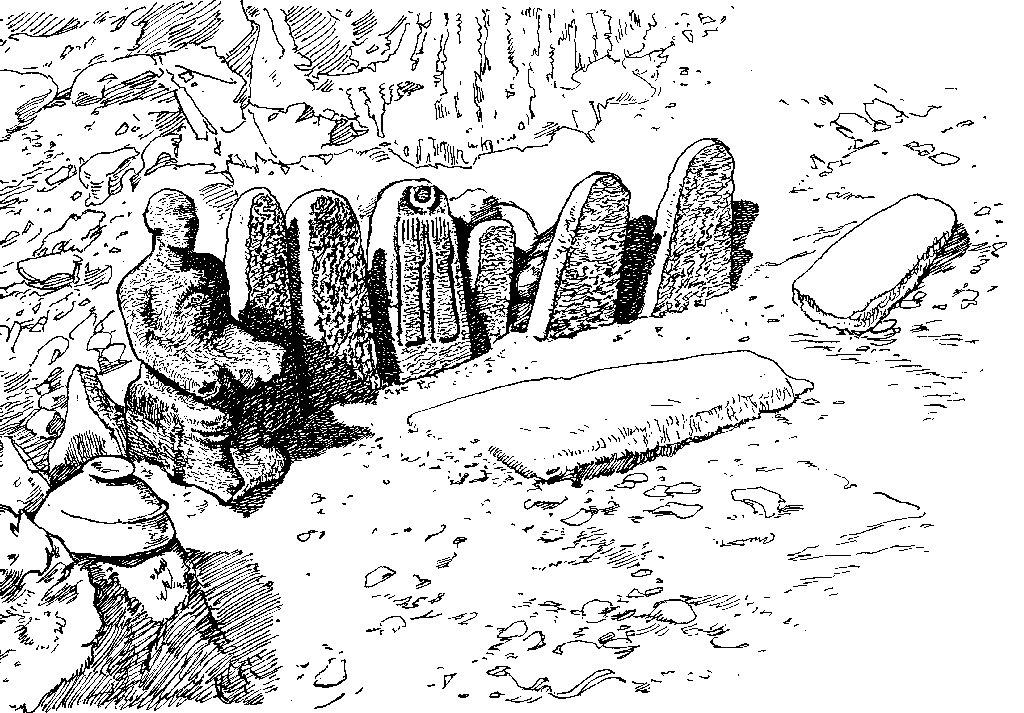 On the evolution from material depictions to aniconism and prohibition of images, several authors argue much in favour of this hypothesis:

but: "… there is no unequivocal evidence that an anthropomorphic cult image stood in Israelite sanctuaries …” (N. Na’aman: "No Anthropomorphic Graven Images." Notes on the Assumed Anthropomorphic Cult Statues in the Temples of YHWH in the Pre-Exilic Period, UF 31, 391-415, 1999).

According to Bob Becking, the current consensus should read: This shows that there were pictures in Israel, but not all pictures were gods and not all gods had pictures in every place.

Not the answer you're looking for? Browse other questions tagged ancient-history religious-history judaism or ask your own question.

6
What attributes did Yahweh have before becoming a monotheistic deity?

22
What was the first known war in history?
5
On the history of Jewish places of worship
9
Did the Bar Kokhba revolt happen before or after Jerusalem's name was changed to Aelia?
4
Are the historical sources from the ancient history trustable?
7
What is the historical origin of the Jewish Sabbath?
2
Was garlic an Egyptian deity, based on Pliny the Elder's "Natural History" (Book XIX, Ch 32)?