What explains this dip in Indonesian GDP growth rate in 1982? 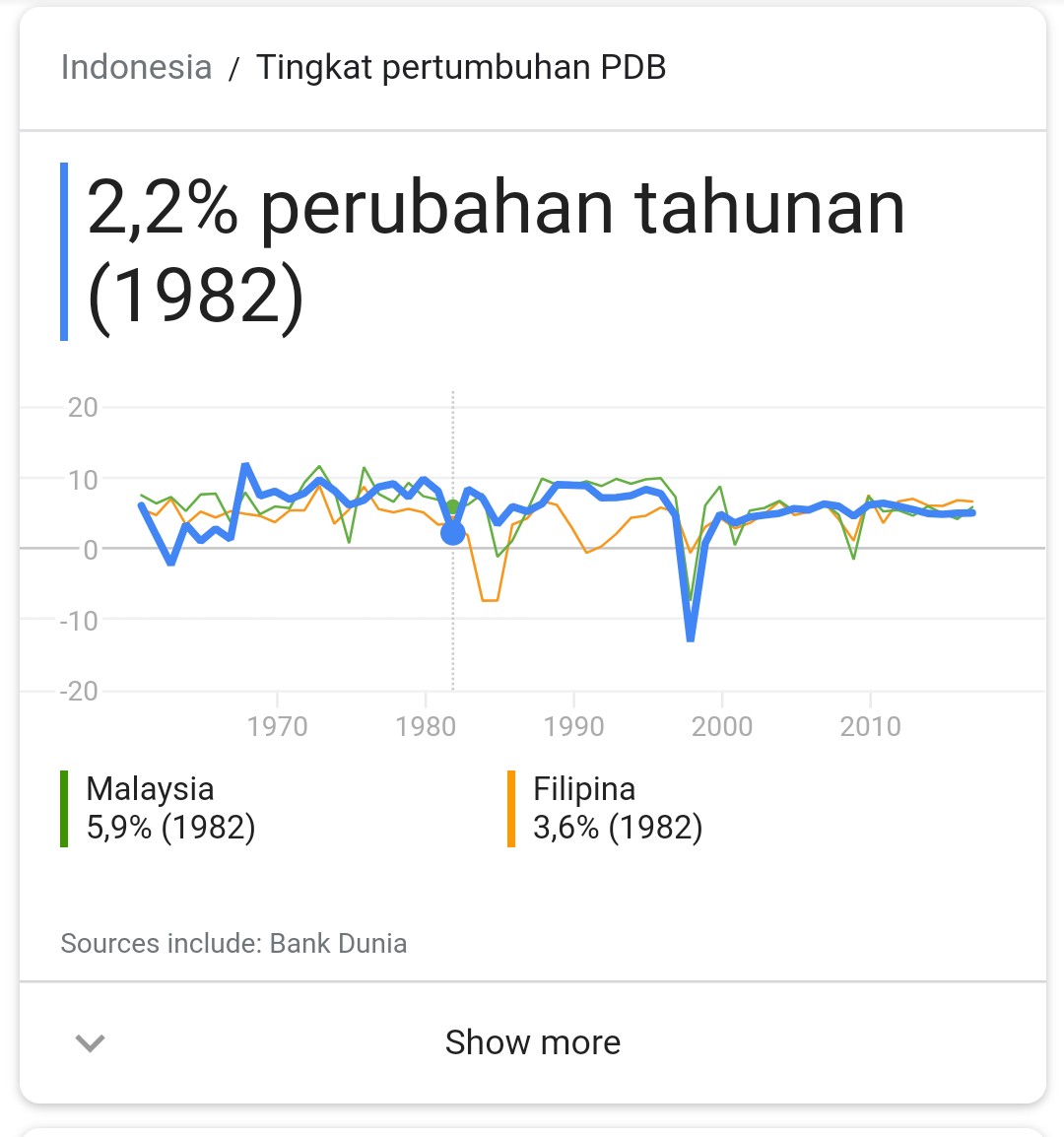 Google helpfully produced a comparison with Malaysia and the Philippines, and it seems that their economies dropped too, but only much later. Meanwhile, Indonesia took a dip in 1982, and recovered a year later to 8.4% when the Malaysian and Philippines economies were sunk.

One possible explanation is the early 1980s recession in the West triggered by the 1979 Iran revolution causing oil prices to skyrocket, but I don't know how this would have affected Indonesian economy and why the waves seemed to hold on a little longer for the Malaysian and Filipino ones.

Indeed the reasons are Oil In Liquid (oil) form: but the Iranian incident wasn't a reason for skyrocketing oil prices. For long anyway. But that is just the kicker, as Indonesia was an oil exporting nation! High prices for oil would have benefited the trade balance of that country:

And from a more historical explanation viewpoint, unhelpful trade mechanics weren't helping in that situation of transition either:

Over the next few years the Indonesian government, like the former colonial government, tried by various policy measures to redirect the country’s foreign trade from Singapore to its own ports. Loading permits, introduced in 1964 to discriminate in favour of Indonesian deepsea shipping lines, were now applied to discourage transshipment through Singapore. In 1982 the Directorate-General gave this ad hoc protectionism the status of a ‘gateway policy’, whereby Indonesia’s non-bulk exports were to be directed through Indonesia’s deepsea ports of Tanjung Priok, Surabaya, Belawan and Makassar (Dick 1987a: 33–5; 1993b). The sanctions differed, but basic policy was little changed from colonial mercantilism. By the 1980s, however, in the era of container shipping, a ‘gateway policy’ designed for the route patterns of conventional break-bulk cargo ships made little sense. After 1971 the Europe–Singapore–Far East trade was served not by 10 000-ton geared freighters but by giant 50 000-ton motherships. Closure of Indonesian ports to small feeder vessels denied Indonesian shippers the benefits of the much lower freight rates made possible by cargo consolidation in Singapore and consequent economies of scale. After the mid-1980s when the non-oil export drive became a national priority after the collapse of oil prices, these restrictions were swept away (Dick 1987a).

Economic policies and outcomes during the Soeharto era

Whereas politics determines the periodisation between 1945 and 1966, a division of the Soeharto era into three major phases, each characterised by specific economic challenges, policies and performance, would be more appropriate. These phases are:

As the price of oil began to fall in 1982, Indonesia’s external terms of trade deteriorated. Other adverse factors affecting the Indonesian economy were the recession in the major industrial countries and the currency realignments of 1985, which aggravated Indonesia’s foreign debt burden. Almost 40% of Indonesia’s foreign debt was denominated in Japanese yen, while its export earnings were denominated in US dollars, which had depreciated steeply vis-à-vis the yen. As the large part of government revenues were obtained from oil company taxes, the government had fewer financial resources available for development projects. In effect, the virtuous cycle of prosperity that Indonesia had enjoyed during the 1970s was now reversing itself.
In response to the worsening external conditions, the government in early 1983 initiated a broad-based adjustment program aimed at restoring macroeconomic stability. To deal with the rising current account deficit, the government devalued the rupiah in March 1983. The problem of falling government revenues was dealt with by an austerity program, involving the deferral of several large-scale public sector projects. A new tax law was introduced in December 1984 aimed at increasing non-oil taxes, particularly personal and corporate income taxes and a new Value- Added Tax (VAT), to offset the decline in oil company taxes. To improve the efficiency of the banking system and the mobilisation of domestic funds, a banking deregulation measure was introduced in June 1983. To this end state-owned banks, which at that time still accounted for the bulk of bank assets, were now allowed freely to set their interest rates, while credit ceilings were lifted.

To encourage more non-oil exports and wean the economy away from its heavy dependence on oil, the economic efficiency of those sectors capable of generating non-oil exports had to be boosted. Because this required an internationally competitive private sector oriented towards export markets, the government introduced a series of deregulation measures to improve both the trade regime and the investment climate for private investors, particularly foreign investors. However, during the early post-oil boom years, the shift from an import-substituting pattern of industrialisation towards an export-oriented one was contested. Several vested interest groups waged an effective rearguard action against further reforms. Some industrial policy makers did not seem to realise that shifting to an export- oriented strategy required sacrificing the highly protected upstream industries, which penalised downstream, export-oriented assembly industries by forcing them to use more expensive, locally made inputs. Hence, the number of categories of products subject to quantitative import restrictions or outright import bans actually increased. This was justified by the rising current account deficit, which could not yet be closed by non-oil exports.

Not until early 1986, when the price of oil fell even more steeply than in 1982, did the government at last find the resolve to push through the policy reforms that had been urged by Indonesian and foreign economists. The price of oil collapsed from $25 a barrel in 1985 to $13 a barrel in early 1986, while prices of other primary products also fell. Indonesia’s commodity terms of trade suddenly worsened by 34%, resulting in a 5% decline in national income (World Bank 1987: 1–2). Export promotion was now imperative. The experience of the Asian Tigers had shown that the initial stages of export-oriented industrialisation depended on a supportive trade regime which approximated free trade conditions for export-oriented firms. This implied that export-oriented firms were able to purchase their inputs, whether imported or locally procured, at world market prices (Little 1979: 14, 34). To this end the government introduced a series of trade reforms aimed at reducing the policy impediments hampering export- oriented firms. A first major step was the introduction of a duty exemption and drawback scheme in May 1986. Firms exporting at least 85% (later 65%) of their output were exempted from all import duties and regulations on importing their inputs (Muir 1986: 22).

Longing for a simple one cause, one outcome model for this answer will not be possible. In 1982 there were quite a few unwelcome catastrophes for Indonesia, like an election, a volcano in Mexico bringing dust into the atmosphere, a major earthquake in South Western Indonesia, the financial/debt crisis in again Mexico pulled down world trade as did the general economic downturn across the globe. But the most important factor always cited, when a neoliberal writes the analysis, is the price of oil and lack of 'reforms':

This is of course painted different when a critique of neoliberalism and power structures illuminates the field:

The seemingly untroubled evolution of the Soeharto regime was interrupted by a sudden collapse in oil prices in 1981/1982 and again in 1985/1986. With growing pressures on the budget and current account it appeared that the vast system of state ownership and public monopoly and the pervasive and protective trade and financial regimes that had constituted its backbone over the previous decades would become unsustainable. Major structural adjustments were required to stimulate non-oil exports, generate new revenue sources and replace state investment as the engine of growth.

The unexpected consequences of the reform programmes were explained by neo-classical economists within the World Bank and elsewhere as the conse- quence of not enough deregulation or of technical errors in sequencing reforms; deregulating trade and finance regimes before the real sector (World Bank 1996: xxvii; Hill, H. 1997; Soesastro 1989; Bhattarcharya and Pangestu 1992). However, the particular sequencing of reforms was not just a technical matter, it reflected the structural opportunities available to reformers in the context of prevailing configurations of power and interests (Robison 1997: 36). Financial reforms came first precisely because they were politically possible while an assault on the well-defended domestic manufacturing cartels or the state banks remained out of reach. As Pincus and Ramli (1998) have pointed out, not only was the sequencing of reforms beyond the control of the technocrats, decisions to open capital markets and balance budgets removed from their armoury some of the most important fiscal and monetary levers over the private sector. In essence, the reform agenda was hijacked by those domestic politico-business alliances that had emerged in the 1970s and who now began to find the system of state capitalism within which they were nurtured a constraint upon their development. State monopolies and nationalist policies in certain areas now stood in the way of their entry into rapidly evolving sources of finance in global capital markets and those lucrative opportunities in domestic banking, public utilities, telecommunications and transportation. Applied selectively to leave intact the basic structure of the rent-seeking state and the principle of political capitalism, deregulation now suited the new politico-business families and conglomerates.

Not the answer you're looking for? Browse other questions tagged economy indonesia or ask your own question.

4
What was the reason for US Fed rate increase in spring 1928?
6
What would be the GDP of the Roman Empire?
6
What were the factors behind the lowest AAA corporate interest rate in U.S bond history during 1946?
8
What is this sword?
7
What was German GDP in 1919 in Goldmarks?
2
For U.S. history 1800-1830, what was GDP by sector and industry?
5
What does this 1960 West German political cartoon mean?
2
What caused the stagnation in real wage growth in the later half of the 20th century?