Is the following claim concerning the loss of classical Latin literature substantiated?

I first came across an uncommonly precise claim that "94% of classical Latin literature was lost during the transition period of late antiquity" while listening to Peter Adamson's History of Philosophy without any gaps podcast. Upon further inquiring with Peter himself, I was able to find the source of this claim in G.W. Trompf, “The Concept of the Carolingian Renaissance,” Journal of the History of Ideas 34 (1973), 3-26:

Doughty Cassiodorus may have kept alive the seven liberal arts and the teachings of Martianus Capella, but if my learned colleague J. A. Willis is right, there is some justification in the reckoning that 94 per cent of of classical Latin literature was lost in the intervening period between Rome's downfall and Charlemagne's rise to power.

The article did provide a reference (see the attached image), but I was not able to find the referenced document anywhere after an extensive search online. Therefore, I was left uncertain as to whether the claim was valid or not.

I then thought of contacting Dr. Trompf himself through email, but have not been successful so far. In the meantime, I decided to post my concern as a question here with the hope that someone might either have access to the aforementioned reference, or is able to substantiate the claim with historical evidences. 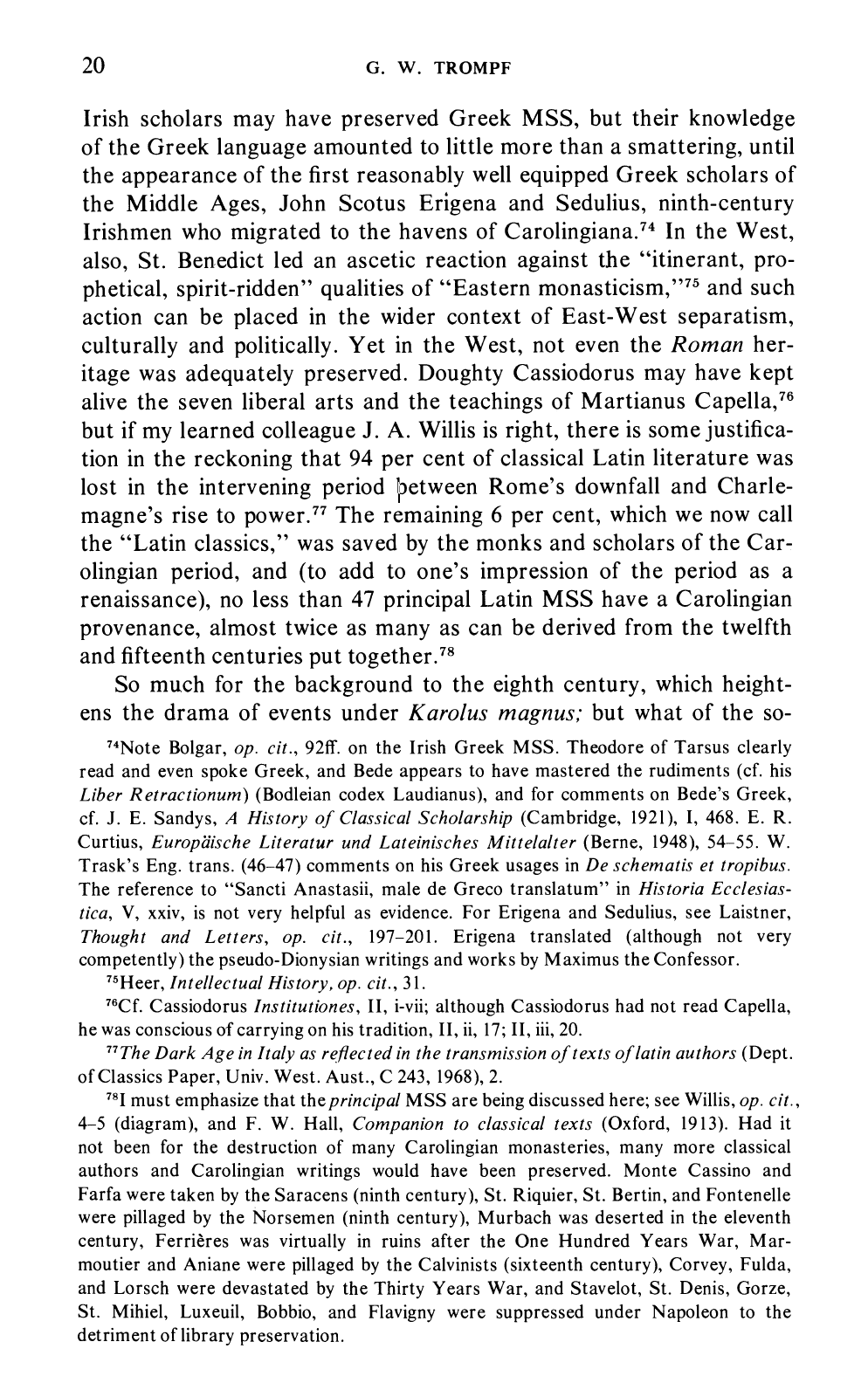 It's hard to see how this claim could be substantiated given that we don't know how much existed in the first place.

No doubt the Roman world produced many literary masterpieces of which we are completely unaware.

The total number of writers regarding whom any notice has been preserved to us is 772, so far as recorded in the pages of Schanz and Teuffel. How many more actually figured in the course of Roman literary history we have no means of knowing, or even of guessing with a fair chance of coming near the truth.

Granted, this article dates from 1905 and finds have been made since then, but our knowledge remains patchy.

The original source: J. A. Willis

The author of the source cited by Trompf would appear to be the same 'J. A. Willis' listed as a former Professor of Classics and Ancient History at the University of Western Australia (1962 - 1988).

I have found a few citations of his articles, but none of them are the one cited by Trompf. None of the sources cited in this posted, most of which post-date Willis' 1968 article, mention the estimate of 94%. Also, as with the OP, extensive searching has turned up no further sources which cite Willis' figure. A further problem with Willis' '94%' is that it is not clear what exactly this percentage refers to; perhaps lost works as a percentage of works known to have existed?

So what estimates are there?

Few sources cite any, but the article Loss of Information from Late Antiquity to the Thirteenth Century states that (for classical literature):

Estimates of the percentage of classical literature that is thought to have survived to the present vary; one widely used estimate is only ten percent.

This article cites Scribes and Scholars: A Guide to the Transmission of Greek and Latin Literature by L. G. Reynolds and N. G. Wilson (2013), but I can find no mention in this book for this estimate (I have a copy), so the above '10% survived' should be taken with a very large pinch of salt.

The article Reference for the claim that only 1% of ancient literature survives gives us a different figure and, as with the above 10%, is not specifically for Latin literature.

Other sources I have checked do not give percentages. Michael von Albrecht in A History of Roman Literature (1997) says:

Only a small portion of Roman literature has come down to us, and we should never forget how much has been lost.

The Oxford Anthology of Roman Literature (by Knox & McKeown, see above) is even less precise:

It is....hardly surprising that the survival of literary works has been haphazard at best.

Perhaps more useful (and productive) than trying to guess at a percentage is to look at the authors:

...for Latin, we have the names of 772 classical authors. Of these, not a word survives from 276 of them. We have fragments ranging from an aphorism to several pages of 352 of the authors. Of the remaining 144, we possess at least one of their works but rarely all of them.

I agree that 94% is an almost unbelievably precise estimate of things we don't know about.

We know of some lost books, poems and plays because other writers refer to them, sometimes quoting from them. For example we know that the Iliad and Odyssey were the two most famous of a series of epic poems about the Trojan War, and the only two to survive anything like complete. Some of the others are referred to or quoted in other surviving works. Although the story of the Trojan Horse seems central to the story of the Trojan War it is only briefly hinted at in the last line of the Iliad 'thus perished Hector, the tamer of horses' and only briefly referred to in the Odyssey. Probably the wooden horse story was covered more fully in one of the other epics now lost.

These epics were all said to have been by Homer. They appear to be part of an existing tradition of epic poetry. Hence, most modern scholars agree with Aristotle's comment 'Everything suggests that there were other epics before Homer, but we know nothing of them'. Consequently, there are probably ancient Greek epics, written or once recited by heart, that were lost not just to us, but to the Ancient Greeks themselves, at least by Aristotle's time.

Plato is said to be the only major Classical author of whom we have all the works ascribed to him in other ancient writings. Thus, he may be the only one whose works we have complete.

In those days writing a book had to be done one copy at a time. It was not therefore like a modern print run in which normally thousands of copies are created, some of which will probably survive. A book could be copied by hand but that was a laborious process. Consequently there were probably many ancient books that only ever existed in one copy, which would have ceased to exist when that copy decayed, fell apart, was burned in a fire, ruined when someone spilled red wine or stew over it or otherwise lost. How many such individual books there may have been I don't know.

I believe it will be impossible to know how much was lost through out the time span of 700 BCE to around 800 CE. One certainty is that Diogenes Laertius is clear that some philosophers never wrote anything, or that he doubted they ever left any written product (like Diogenes the Cynic).

Given that Greeks did not regard writing as pivotal to express one’s philosophy, I tend to (personally) gravitate towards most philosophers not writing that much. Also, when one says X philosopher wrote 20 books, “books” should not be thought of as lengthy as modern ones. Rather, chapters is more appropriate.

We shall never know the truth i am afraid. So the % guess is redundant.

MaximilianMaximilian
1
1
Add a comment  |
Highly active question. Earn 10 reputation (not counting the association bonus) in order to answer this question. The reputation requirement helps protect this question from spam and non-answer activity.

Not the answer you're looking for? Browse other questions tagged roman-empire literature late-antiquity or ask your own question.

7
When were both minuscule and majuscule letters used for the first time in the same Latin manuscript?
3
Why was there an increase in literature regarding fire safety in America during the 1970s?
13
References or accounts in historical Egyptian literature about the Exodus
10
Why did Latin take root so deeply in Italy, Gaul, and the Iberian Peninsula, but not Greece or beyond?
8
What is the earliest known book / novel trilogy in literature?