Where did John Adams write of the night he shared a bed and an argument with Benjamin Franklin? Did Franklin write of it as well?

The BBC News article Viewpoint: Why Trump may win his legal fight over border wall it says:

American politics have not been so bitter and divided since Benjamin Franklin and John Adams were forced to share the same bed in 1776.

Question: From "Adams wrote..." (below) I can deduce that at least part of the story was reconstructed from the writings of John Adams, but it's not stated where. Is it known where the events of this bedtime quarrel were recounted? Has Benjamin Franklin wrote of his side of the story as well?

The rest of the quote:

That brings us back to the night Franklin and Adams had to share a bed. The two founding fathers were going to meet Admiral Richard Howe of the British Royal Navy in Staten Island to discuss the possibility of ending the Revolutionary War.

They found themselves in New Brunswick, New Jersey, at the Indian Queen Tavern. However, it was full and only one room with one small bed was available.

Two of the most irascible framers of the US Constitution crawled into the small bed and immediately began to quarrel.

Franklin had opened up a window but Adams held the common view of the time that you could get ill from night vapours. Franklin insisted that cool fresh air was, in fact, a health benefit and added: "I believe you are not acquainted with my theory of colds." 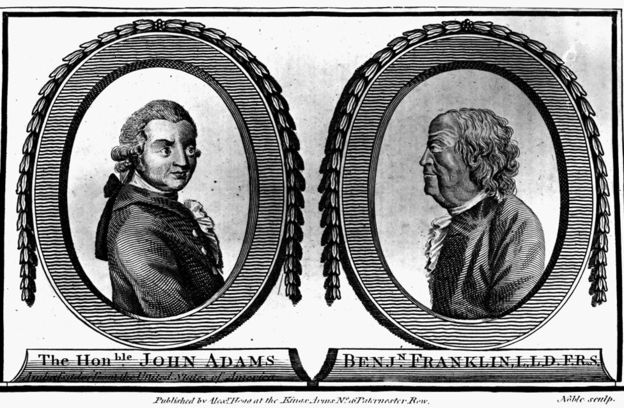 They argued all night until Adams fell asleep. Adams simply wrote later: "I soon fell asleep, and left him and his philosophy together."

It is perhaps a lesson for our times.

John Adams recorded this event in detail in his diary under "Monday, September 9":

The taverns were so full we could with difficulty obtain entertainment. At Brunswick, but one bed could be procured for Dr. Franklin and me, in a chamber little larger than the bed, without a chimney and with only one small window.

The window was open, and I, who was an invalid and afraid of the air in the night, shut it close. "Oh!" says Franklin, "don't shut the window, we shall be suffocated." I answered, I was afraid of the evening air. Dr. Franklin replied, "The air within this chamber will soon be, and indeed is now, worse than that without doors. Come, open the window and come to bed, and I will convince you. I believe you are not acquainted with my theory of colds."

. . . The Doctor then began a harangue upon air and cold, and respiration and perspiration, with which I was so much amused that I soon fell asleep, and left him and his philosophy together.

Adams, John. The Works of John Adams Vol. 3: Autobiography, Diary, Notes of a Debate in the Senate, Essays. Jazzybee Verlag, 2015.

As you can see, Adams was quite explicit that he and Franklin shared one bed. On the other hand, the mood seemed rather more cordial than the BBC article made it out to be - Adams opened the window as requested, and afterwards conceded some merit to Franklin's theory.

Adam's is the primary source usually cited for the story. If Franklin had also written of it, I did not find such a reference.

Not the answer you're looking for? Browse other questions tagged united-states 18th-century or ask your own question.

20
Did King George III turn his back on John Adams and Thomas Jefferson?
10
Where and how did scientists of the 18th and 19th century learn foreign languages?
13
Did Washington like or dislike the monarchical styles of address proposed by John Adams?
1
Where in Pittsburgh did the 1883 Congress of the International Working Peoples' Association meet and write the Pittsburgh Proclamation?