Why was the IRT Flushing line built with three sets of tracks, instead of two or four?

Why was the IRT Flushing Line built with three sets of tracks, instead of two or four? (If you don't understand this, please see the addendum below)

More generally, when are trains lines typically built like this?

If it's economical and desirable to put in a third line for express service, why not a full four track like many of the other lines in the nyc subway?

The best I can think of is that there's expected heavy demand for rush hour commuting service such that local service will have insufficient capacity then but otherwise be sufficient, and that the incremental cost of adding the fourth track makes it uneconomical to include it for future optionality.

But I have a hard time believing that this was the case for the Flushing line but not for any of the other lines. I guess maybe because the line only runs one direction out from the city center, whereas the other lines require both directions to have express trains to cover rush hour demand?

Here is a picture of the IRT Flushing Line (commonly known as the "7 Train" these days). The three sets of tracks are labeled. 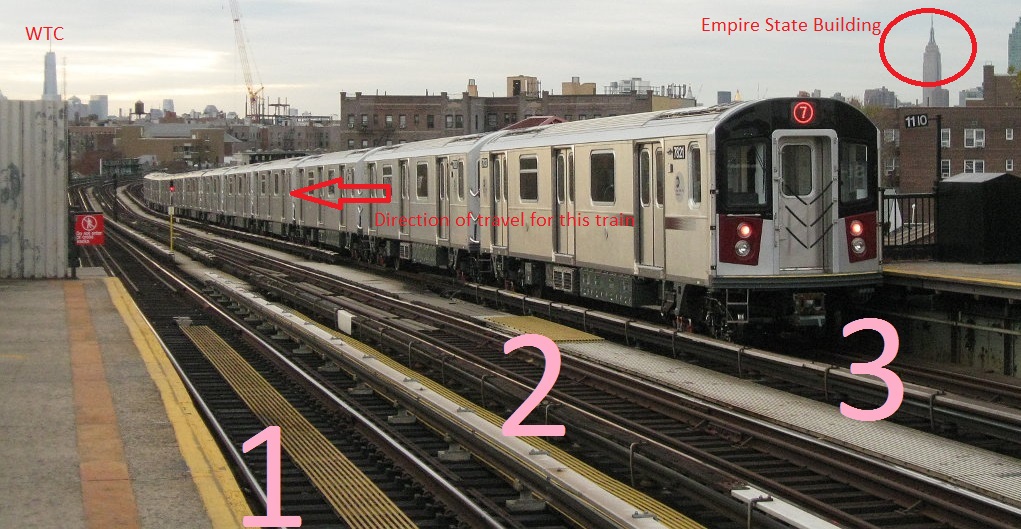 FYI, for those of you not familiar with the NYC transit system, the 7 train on track 3 is "Inbound" which means going from Queens towards Manhattan. Specifically, it will go towards the Empire State Building visible in the upper right corner. Most people take the inbound train to work in the morning. Track 1 is for the "Outbound" train. It goes from Manhattan to Queens. Most people take the "Outbound" train in the evening, to go home. And during rush hours, the middle track, track 2, carries the "express train" that skips a bunch of stops. During morning rush hour, the express train is inbound, and during evening rush hour, the express train is outbound. This photo, downloaded from Wikipedia, was taken before 2001 as the WTC is visible on the upper left corner of the photo.

Here is a map showing express service vs local service:

So look at the 7, it's the purple colored train. If you wake up in the morning, and you live near the "Junction Blvd" stop, if you take the express line, it will stop only 61 St/ Woodside and Queensboro Plaza on the way towards Manhattan. If you take the local train, it will stop at 90 St-Elmhurst Av, 82St-Jackson Hts, 74 ST-Broadway, 69St, etc. Much faster to take the express train. OTOH, if you are outbound in the morning, you must take the local train.

Contrast ths all with the the E, F, M and R trains on the Independent Line Queens Blvd, (they are yellow, orange, and blue), you will see also that there is express subway service between Jackson Hts and Forest Hills. However, on this line, there are 4 sets of tracks, and express service runs in both directions for much of the day. Because express service runs in both directions, these trains are more convenient and real estate prices are much higher. If IRT had made the same decision, perhaps real estate along the 7 line would be higher as well? Then IRT would have made more profit?

The history question here: Why did the IRT system decide to build only 3 sets of tracks instead of 4?

Browse other questions tagged transportation new-york or ask your own question.

2
Why was the arrival of the Hindenburg considered newsworthy?
11
When did the last (non-tourist) commercial stagecoach line run in the USA?