What is the earliest example of the usage of 'Nazis' to refer clearly and exclusively to the National-Socialists?

The term 'Nazi' is now commonly explained as being an abbreviation of 'National-Socialist'. That was not always the case.

The use of the term Nazi is a well-established convention in English. It emerged around 1924 among opponents of National Socialism, who borrowed it from the nickname Nazi (from the masculine proper name Ignatz, the German form of Ignatius), meaning “a foolish, clumsy, or awkward person.” The NSDAP briefly adopted the Nazi designation as what the Germans call a “spite word,” but they soon gave this up and generally avoided the term, considering it derogatory. Before 1930, English speakers had called the party members National Socialists, a term that dates from 1923. The use of “Nazi Germany,” “Nazi regime,” and so on was popularized by German exiles abroad. From them, the term spread into other languages and eventually was brought back to Germany after the war.
Anson Rabinbach & Sander L. Gilman (Eds): "The Third Reich Sourcebook", University of California Press: Berkeley, Los Angeles, London, 2013, p 4.

The above is probably not entirely correct regarding the timeline.

For sure it's quite underdeveloped in describing the process and providing evidence for this description.

It seems that in 1922 Kurt Tucholsky connects Austrian provincialism and chauvinism to the political situation in Berlin:

I am neither a relative nor a relative of the accused (we would both strongly forbid it) - but as far as the immigration of foreign elements is concerned, there is one case where I liked to climb onto the Berlin City Hall and, looking at the capital lying at my feet with tears fluttering around my eyes, would say: "You shouldn't have it! Namely the "Nazis" not Berlin.

Don't look at me, reader. Let us quickly agree that by the "Nazis," I mean that certain genre of the Austrian, Moravian, and especially Viennese artist folk, which begins to pollute the above-mentioned Berlin in the most violent way. But we don't want that any more.

I know exactly what an unfortunate role the Poznan-born Berliner plays on journeys ("Det is der Kölner Dom! Haben Se keenen größern?"). But no Berliner has ever been as cheeky and local-chauvinistic as this kind of "Nazis" (which I deliberately don't call Austrian, because Otto Weininger is one and Peter Altenberg and Karl Kraus and Alfred Polgar - but we agree who we mean).

The problem here is that Tucholsky may allude to NSDAP people but uses the term here to insult someone ('them'?) as something like 'stupid Austrian Rednecks'. That is the reason why the following quote has the question mark:

The University of Vechta has another FAQ-like tidbit on the development:

The Illustrierte Lexikon der deutschen Umgangssprache by Heinz Küpper (Stuttgart 1984) states - in analogy with the Historical Dictionary of German Figurative Use by Keith Spalding (Oxford 1984)
"The abbreviation 'Nazi' referred in 1903 to the 'Nationalsozialen' under Friedrich Naumann.
For the National Socialist first (?) documented by Kurt Tucholsky in 1923. In any case, Nazi propaganda minister Dr. Joseph Goebbels is not the creator" (p. 2021). ––
The first known use of the word National Socialist is, by the way, even older; Cornelia Berning ("Vom 'Abstammungsnachweis' zum 'Zuchtwart': Vokabular des Nationalsozialismus", Berlin 1964, p. 138) she proves it for 1887 in the German Adelsblatt.
Under the heading "Fürst Bismarck der erste Nationalsozialist" (Prince Bismarck the First National Socialist), it says:
"The state is not, according to today's party system, a sum of individual wills, but the overall will as an expression of the National Spirit. Therefore, however, he knows, as only One God, also for the present only one reasonable party concept, namely, so one could say, National Socialism with the One Program of the Christian commandment of justice and love. The first representative of such a Unity National Party can be recognized in Prince Bismarck".
(Own translation, links added)

But looking through old newspapers it remains unclear exactly when the term 'Nazi' was so widely understood in Germany as to refer to National-Socialists.

For example, as late as 1925 the Social-Democrat newspaper Vorwärts still contains ads like the following: 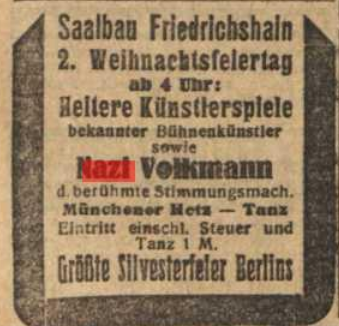 Here it seems to be an abbreviated first name, Ignatz/Ignatius. But it may be quite a high brow satire stage name? Either way, it seems that in newspapers of the first half of the 20s 'Nazi' was either a harmless short form of a common name or referring to the established stage character of 'stupid Austrian'.

A note on pronunciation: It is not just the first two syllables,
which are Na- | -ti o -
from /natsi̯oˈnaːlzotsi̯aˌlɪst/;
with a theoretical result of natsi̯os.

The earlier political abbreviation — and content wise: politically not very related — has another etymology:

When did that change?

What is the earliest example of the usage of 'Nazis' to refer clearly and exclusively to the National-Socialists of the NSDAP?

It would be great if there would be an article in a paper at the time explaining to readers that 'Nazis' has a certain meaning (acquired), attached to the political party.

The Term Nazi, referring to the NSDAP originated alluding to the existing derogatory definition by political opponents of the National Socialists the German Labor movement. As you say around 1924 from the The Third Reich Sourcebook.

The first use of the term "Nazi" by a NSDAP member to refer to the NSDAP was during an abortive attempt to reclaim the word beginning in 1926 by Joseph Goebbels in an early pamphlet called Der Nazi-Sozi or The Nazi-Sozi.

In general the NSDAP did not use the word Nazi seeing it as a derogative. Again as you state in your question, it only became widely used in Germany to refer to the National Socialists after WWII.

Nazism Etomology
In the 1920s, political opponents of the NSDAP in the German labour movement seized on this and – using the earlier abbreviated term "Sozi" for Sozialist (English: Socialist) as an example – shortened NSDAP's name, Nationalsozialistische, to the dismissive "Nazi", in order to associate them with the derogatory use of the term mentioned above.

The first use of the term "Nazi" by the National Socialists occurred in 1926 in a publication by Joseph Goebbels called Der Nazi-Sozi ["The Nazi-Sozi"]. In Goebbels' pamphlet, the word "Nazi" only appears when linked with the word "Sozi" as an abbreviation of "National Socialism"

Not the answer you're looking for? Browse other questions tagged germany language nazism weimar-republic or ask your own question.

13
What are the counterarguments to calling German nazism a right-wing movement?
51
Is the claim that Hitler came to power democratically justified?
14
When and how did the term "Nazi" start replacing the term "Germans" in the context of WW2?
16
Why were blackletter typefaces abolished in Germany?
19
How did Hitler get off so lightly after the Beer Hall Putsch?
11
Why did Joseph Goebbels allow an all-Jewish Orchestra to exist and perform in Berlin from 1938 to 1941?
12
Did the Nazis identify as being Fascists? How exactly did they view themselves?
12
When was the first usage of the slogan "Wer hat uns verraten..."?
5
What exactly do eyewitness testimonies say about Hitler's behavior during the Munich Putsch?
5
Did Hitler and Nazi officials give interviews and cooperate with the Weimar republic general press?