What evidence do we have to claim the Ancient Romans kept African grey parrots as pets?

[...] The Ancient Romans, who kept both Rose-ringed Parakeets and African Greys (Psittacus erithacus), ..., were also fascinated by the birds. "The parrot salutes emperors and pronounces what words she heareth" reported Pliny the Elder.

I found that Pliny himself described a bird that "seems" the rose-ringed (or ring-necked) parakeet (Psittacula krameri). What about the African grey?

I couldn't find as easily the evidence for this claim - which, by the way, is not isolated. The Italian Wikipedia page says:

...the African greys have been kept as pets for more than 4000 years. Egyptian hieroglyphics clearly show domestic parrots. Ancient Greeks also kept them as pets, a tradition resumed by the Romans.

Do we have reasonable evidence?

I'm going to go with 'There is no evidence'.

Parrots (psittaci).—Varro mentions them among rare birds exhibited at public shows. The increase of trade between Egypt and India in the time of Augustus probably helped to make the parrot a common pet in Italy under the Empire. For it was chiefly, at least, the green Indian parrot that the Romans knew. "India sends us this bird," says Pliny; and he adds that its whole body is green, except for a red band on the neck. Of the grey West African parrot, a far better talker than the Indian, there is no trace in the Roman Empire. But green African parrots may have found their way to Italy.
—Jennison, 'Animals for Show and Pleasure in Ancient Rome'

Below, the full page from which I got the above, is shown for the primary sources on whom Jennison based itself: 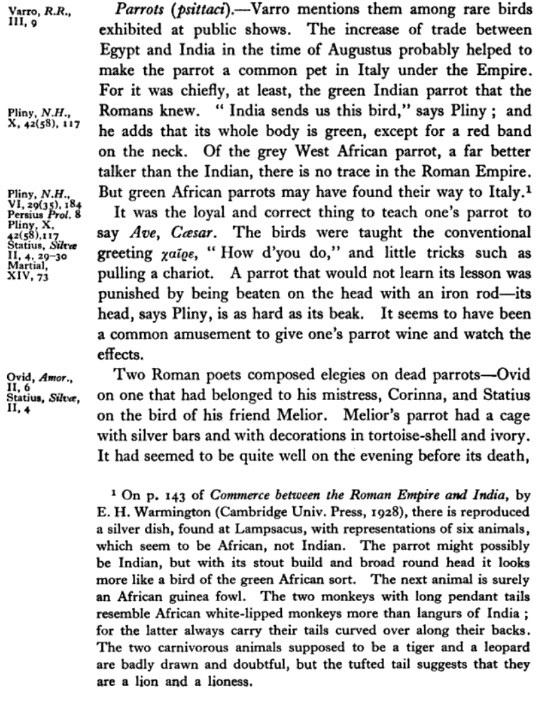 Lazenby also only refers to the green Indian parrot, and, further, adds:

The Greeks were also acquainted with the parrot: Ctesias, 100 years before Alexander, is the first Greek writer to make mention of the bird, calling it bittakos, and a curious animal of India.
—Lazenby, 'Greek and Roman Household Pets'

No other parrots are mentioned in that work, but this suggests the Greeks would have probably been keeping the Indian and not the African variety.

Lastly, I contacted the authors of 'Birds: Myth, Lore and Legend' and the reply said that they based the claim regarding grey parrots off secondary sources, particularly Dotterer on Shakespeare's use of Pliny:

Although Shakespeare uses Pliny a good deal in Othello (apparently both the Latin and the 1601 Philemon Holland translation), Baldwin concludes that Shakespeare does not rely very heavily on him as a source elsewhere in the canon. Pliny does, however, include in his catalogue of talking birds not only parrots and nightingales, but ravens and starlings as well. Apparently, the African Grey Parrot, brought to Rome by Scipio Africanus, stimulated a keen interest in talking birds.
—Dotterer, 'Shakespeare: Text, Subtext, and Context'

Dotterer's claim is unsourced, and, as noted above, the comprehensive review of all parrots in Rome by Jennison did not use Pliny to support the hypothesis of the grey African parrot being kept by Romans. I did some investigating into links between Scipio Africanus and parrots, and couldn't easily find anything to say he brought one to Rome—indeed, the only link seemed to be Dotterer.

The authors also referred to this secondary source:

The history of the grey parrot’s domestication dates at least as far back as 2000 BC with Egyptian hieroglyphics clearly depicting grey parrots as pets. The ancient Greeks also valued them, as did wealthy Romans who often kept them in ornate cages.
—Espley, 'The Journey from a Bustling Forest Community to Solitary Life in Your Living Room'

Hence, there was no primary source evidence for this as used by the authors.

Not the answer you're looking for? Browse other questions tagged ancient-history ancient-rome sources animals or ask your own question.