What was the timetable for Germany's Invasion of the Low Countries (Fall Gelb) in WW2?

I was watching the 1969 classic movie 'Battle of Britain' the other day and noted numerous scenes where the British were very concerned about a German invasion; "what are they waiting for?" was a quote which stuck in my mind.

In Führer-Directive Number 6 (October 1939) Hitler calls for the invasion of the Low Countries as soon as possible although there was no direct mention of an invasion of France immediately afterwards. Indeed in this document it seems that a long war in the west was assumed.

History records that the resounding success stunned everyone, including Germany. This victory also led to the success of Fall Rot (the Fall of France) in an overall timeline of six weeks. I did a bit of research on Fall Gelb (the Manstein Plan) online but was wondering, just what kind of timetable did the German planners expect?

In Panzer Leader, Heinz Guderian describes the development of the Manstein Plan for Fall Gelb in early 1940. He states that war games were held on the 7th and 14th of February 1940 which produced results that were to his mind "decisive in its favour", and which generated considerable discussion between the officers present. Key points of contention were the time required to reach the Meuse River, and whether the panzer forces should wait for infantry support before proceeding across. Halder was among those calling for a "properly marshalled attack" which would wait for infantry support and which would require about nine or ten days to cross the river. Guderian and his fellow panzer specialists were arguing for a mass attack employing every available tank which would "drive a wedge so deep and wide that we need not worry about our flanks; and then immediately to exploit any success gained without bothering to wait for the infantry corps."

At a conference at the Reich Chancellory in Berlin Guderian was subsequently asked by Hitler to outline his plan for the attack. Guderian was in command of the vanguard forces. He replied that:

On the day ordered he would cross the Luxembourg frontier, drive through southern Belgium towards Sedan, cross the Meuse and establish a bridgehead on the far side so that the infantry corps following behind could get across.

He says at that point Hitler asked him, "And then what are you going to do?", and claimed that Hitler was the first person to have ever asked him this question.

Guderian answered, "Unless I receive orders to the contrary, on the next day I intend to continue my advance westwards. The supreme leadership must decide whether my objective is to be Amiens or Paris. In my opinion the correct course is to drive past Amiens to the English Channel." Hitler nodded and said nothing more.

Guderian claimed he never received any further orders as to what he was supposed to do once the bridgehead over the Meuse was captured. All decisions, until he reached the Atlantic seaboard at Abbeville, were taken by himself alone. The Supreme Command's influence on his actions were merely restrictive throughout. 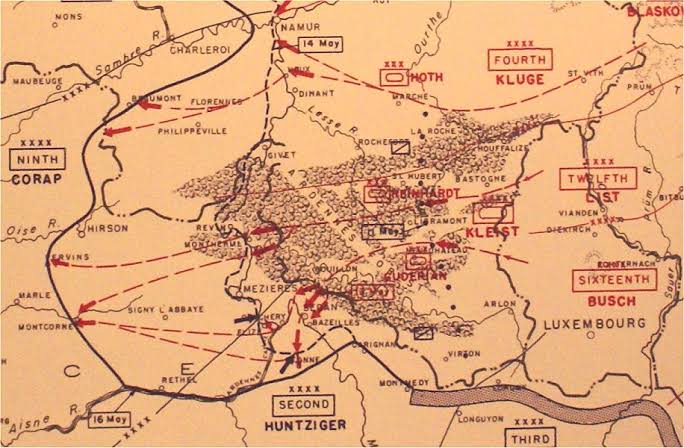 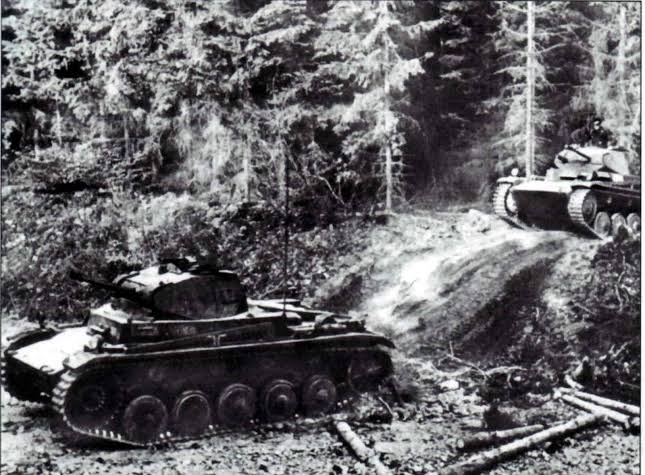 I learned in school the Germans planned to conquer The Netherlands within 24 hrs. They were unpleasantly surprised it took them 5 days to do it.

The initial plan was to drop para's on key points, such as the Meuse bridges in Rotterdam and around The Hague. There they were to capture the government and the royal family, and force a surrender. The main assaults were with infantry in the north, through Groningen and Frisia (Friesland) to capture the strategic Afsluitdijk (Enclosure Dike), and in the center towards the Grebbeline.

The bridges in Rotterdam were captured, but the assault on The Hague failed. Most Fallschirmjaegers there were captured. The German assault in the north was stopped near Kornwerderzand. The fortress guarded the Afsluitdijk.

The Dutch army's main line of resistance was the Grebbelinie. This line wasn't ready (what was ready in the Dutch army?) and taken after heavy resistance. The Dutch army tried to retreat, but this retreat turned into a rout.

For this reason general Reijnders resigned his command before the war in 1939. He never thought the Grebbeline could be held. He was replaced with general Winkelman who was more compliant with the government's wishes to defend an indefensible position.

With the Dutch army in retreat, the German gave an ultimatum: surrender now, or we bomb Rotterdam to smithereens. The Dutch government accepted to surrender, but the Germans still bombed Rotterdam.

The surrender did not include the province of Zeeland, which surrendered independently on 18 May 1940. (For those of you who wonder why New Zealand is named New Zealand, this is the Zeeland it is named after.)

I'd like to add that had the parachute assault succeeded it's almost certain the Dutch government would have surrendered, within the assigned 24 hrs.

Now we look at the raid on Eben-Emael as the most daring raid in the beginning of WW2. Had the attack on The Hague succeeded, the Eben-Emael raid would be small side note in history.

I gave a look to Halder's diary, and I did not find any reference to military objetives beyond the line of Antwerp, Namur and Sedan. Most estimations declare that the Meuse would be reachable between days 4 and 10.
There are not other references of time before may 10 of 1940 (day of the attack).

The stock answer is "As soon as possible." A more nuanced answer is that it became a "secondary" priority after the Mechelen Incident, in which a German plane with the original Fall Gelb plans crash landed in Belgium, meaning that the plans were captured by the Allies.

As a result, Manstein and Co. moved the focus of the invasion "south" to the Ardennes, where 70% of Germany's armor and the crack infantry were concentrated. The northern thrust had little armor and second line troops, meaning that it was now a much lower priority.

In fact, one variant of the French incursion into Belgium had the French seventh army going all the way to the Netherlands. That would have slowed down the German occupation of the Netherlands but left the Allies even more vulnerable to the "left hook" from the Ardennes than they actually were.

Wikipedia's article on Battle of the Netherlands puts it far more succinctly than I could ever hope to (my emphasis):

Though it was thus on 17 January 1940 decided to conquer the whole of the Netherlands, few units could be made available for this task. ... The attack on central Belgium was only a feint — and the attack on Fortress Holland only a side show of this feint. ... leaving just the 18th Army under General Georg von Küchler to defeat the Dutch main force. Of all German armies to take part in the operation this was by far the weakest. It contained only four regular infantry divisions (the 207th, 227th, 254th and 256th Infantry Division), assisted by three reserve divisions (208th, 225th, and 526th Infantry Division) that would not take part in the fighting. Six of these [seven] divisions were "Third Wave" units only raised in August 1939 from territorial Landwehr units. They had few professional officers and little fighting experience apart from those who were World War I veterans. Like the Dutch Army, most soldiers (88%) were insufficiently trained. The seventh division was the 526th Infantry Division, a pure security unit without serious combat training. The German divisions, with a nominal strength of 17,807 men, were fifty percent larger than their Dutch counterparts and possessed twice their effective firepower, but even so the necessary numerical superiority for a successful offensive was simply lacking.

Goring required that Fortress Holland be conquered in order to both support his air attack on Britain and defend the German heartland from Allied air attack, but the inadequacy of the troops assigned to the task, both in quality and quantity, ensured that no decisive result could be expected in the early days of the war.

No serious German commander could have expected anything other than a slog through the Netherlands with this motley crew of poorly led and untrained men mostly over 35.

Not the answer you're looking for? Browse other questions tagged world-war-two military nazi-germany or ask your own question.

28
What became of Nazi Germany's embassies in neutral countries?
6
What was the alcoholic beverage of choice for British soldiers during WW2?
13
What were Britain's defensive plans for a Nazi invasion?
12
What was Nazi Germany's end goal?
10
Nazi Germany's secret service SD was first called Ic-Dienst, what does "Ic" stand for?
10
At the start of Barbarossa, what was the state of Germany's oil supply?
30
Did Germany's role in WW2 affect the historical perception of its role in WW1?
13
Why did the Allies lose the Battle of France (1940)?
7
Did the Germans consider an amphibious landing for Fall Blau?
1
What was the timetable for the arrival of the 100,000 man Japanese garrison at Rabaul?