What happened to the undergrad students who attended the Feynman Lecture Series in 1961-63?

In the academic years of 1962-2 and 1962-3, Richard Feynman gave his celebrated series of lectures to a cohort of undergraduate physics students at Caltech. It has been claimed, probably tongue in cheek, that over the course of the two years the undergrad students themselves abandoned the lectures, but Feynman never noticed because academic staff from across Caltech replaced them, so attendance continuously increased rather than deceasing.

The careers of all those students, now aged somewhere in their mid 70's, have all ended or are winding down. Has anyone done an analysis of performance, relative to expectations, of the careers of these fortunate students?

It is worth noting that while the lectures themselves are brilliant, the courses themselves were a mess. Leighton and Sands and the teaching assistants never knew in advance what Feynman would cover in a lecture, beyond a sentence or two of outline. Everyone was always scrambling behind the scenes, after the fact, to develop meaningful exercises and assignments for the students. How these two facts affected the careers of the students strikes me as fascinating area of study.

I'm going to address your question in two parts:

1. The accuracy of the claim that attendance dropped.

2. The effect that the lectures had on the attendees.

Firstly, as you rightly hypothesised, the tale of dropping attendance was false. This stemmed from a preface to the book, written by David Goodstein and Gerry Neugebauer. They wrote that

"… as the course wore on, attendance by the registered students started dropping alarmingly. ... Many of the students dreaded the class..."

As it turned out, Goodstein was not at Caltech at that time. Neugebauer, on the other hand, was involved, but would often joke about the attendance, which could have coloured his memory.

In fact, the general experience was quite contrary. Matthew Sands, and attendee at those lectures, wrote in his book On the Origins of The Feynman Lectures on Physics, A memoir by Matthew Sands

I was sitting at the back of the hall at most of the lectures, and my memory—of course, dimmed by the years—is that perhaps twenty percent or so of the students were not bothering to attend. Such a number would not be unusual for a large lecture class, and I do not remember that anyone was "alarmed". And although there may have been some students in my recitation section who dreaded the class, most were involved and excited by the lectures—although some of them, very likely, would have dreaded the homework assignments."

If further proof is needed, see this photo of the attendees to one of his lectures. The vast majority are quite young, and according to the Caltech site only those with ties are professors. (Image from here) 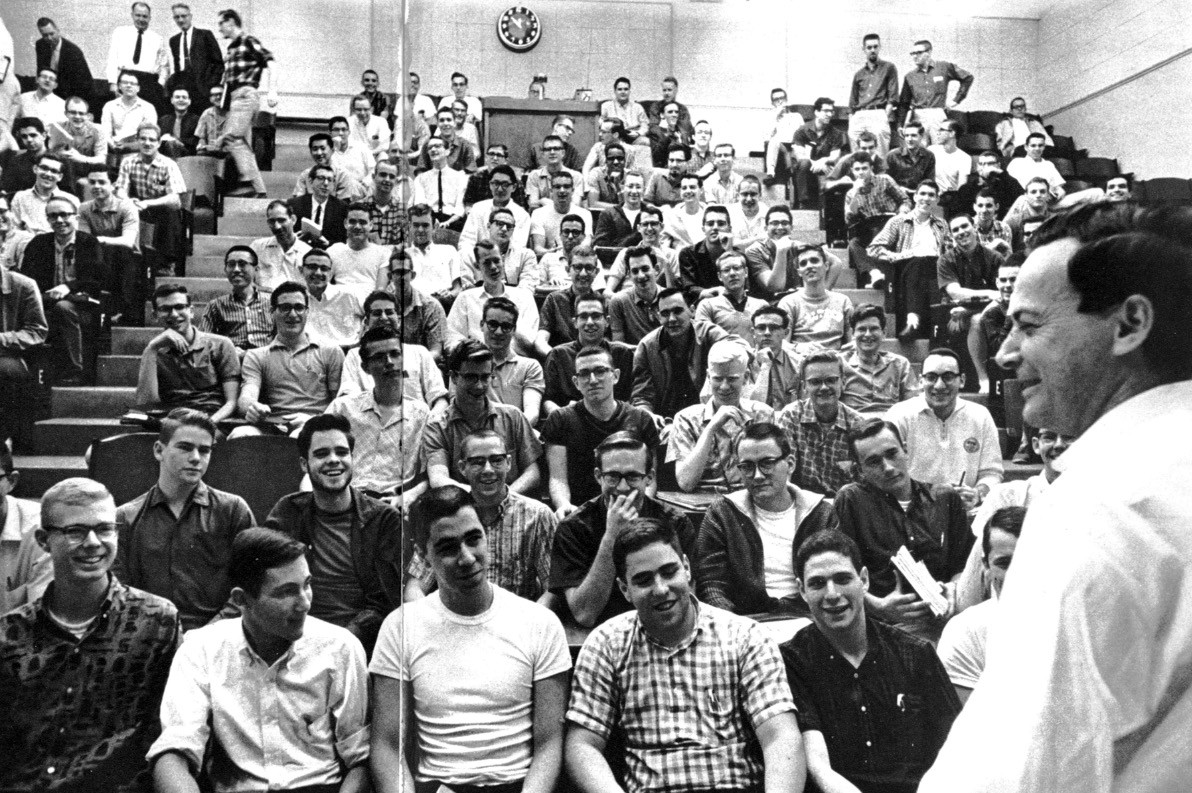 Secondly, in response to your actual question - that of the effects that going to Feynman's lectures had on the attendees - it seems as though it wasn't necessarily a life-changing experience, though it was (at least in hindsight) enjoyable.

David Goodstein, another Caltech physicist, said long afterward, “I’ve spoken to some of those students in recent times, and in the gentle glow of dim memory, each has told me that having two years of physics from Feynman himself was the experience of a lifetime.”

As to whether or not this impacted their career in physics, as noted in the comments - that would require a full scientific study.

As a member of "Feynman's Class" (You can see me in the Realites photo above: Top row, third from the right), I have often wondered why Caltech hasn't done an oral history project on this subject. I don't know how much of it was Feynman, but the overall effect of four years at Caltech was to make many of us unafraid of any intellectual endeavor. We had gone up against a set of people who were wicked smart and had survived and even thrived. It is also amazing how financially successful we were. Take Alley Six in Fleming House -- which had six freshmen living in it during the 1961-62 year, in order of estimated net worth: Michael Scott -- First president of Apple Computer. Given that he has maybe the world's most valuable gem and mineral collection at over half a billion dollars, Estimated Net Worth: $500Mill - $1000Mill. My guesses go down from there, but the median net worth of the other five could be over $100Mill. I went to most of Feynman's lectures, except Physics 2B (electrodynamics). which was a real mess.

Not the answer you're looking for? Browse other questions tagged science education or ask your own question.

6
What advanced educational opportunities were available to native Africans in the early 1890's?
26
Who discovered first that the Moon does not have its own light?
14
What happened in 1914 that ended the golden age of microbiology?
10
What happened to all the scholars and scientists of Western Rome during the barbarian invasions?
0
Who was the first US president to graduate from a public university?
4
Who were the earliest Californian university students?
14
What happened to University College of San Francisco?
22
Who are the three men standing and what are they holding at this University of Paris Doctors' Meeting?
9
At what point did high school become a standard prerequisite for university students in the USA?