Why is ancient chinese rocket so decorated? 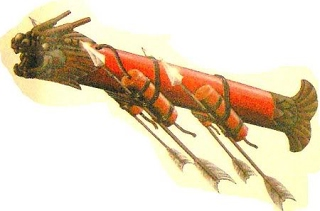 This picture doesn't make sense. Who would want to carve a head statue just for a rocket that will blow up?

How does it work?

The decorated part does not explode b/c it is a launcher, not a bomb. It does not break upon falling either, b/c it was used by the navy, so the used-up launcher falls into the water, and can be recovered later.

Decorations make sense. They scare the enemy (who will think they are facing a fire-breathing dragon). And they inspire pride into own soldiers. I am pretty sure early rocket weapons were focused on psychological effect, due to low accuracy.

The Huolongjing also describes and illustrates the oldest known multistage rocket; this was the "fire-dragon issuing from the water" (huo long chu shui), which was known to be used by the Chinese navy.[32][33] It was a two-stage rocket that had carrier or booster rockets that would automatically ignite a number of smaller rocket arrows that were shot out of the front end of the missile, which was shaped like a dragon's head with an open mouth, before eventually burning out.

Painting above is probably inspired by this illustration: https://en.wikipedia.org/wiki/Huolongjing#/media/File:Chinese_Multistage_Rocket.JPG

30
How did Europeans first acquire gunpowder?
10
Why was old Shanghai called "Whore of the Orient"?
6
What were conditions like for Chinese men subject to recruitment by the army during the Second Sino-Japanese War and Chinese Civil War?
4
Did Stalin disarm the Chinese Communist Party around 1927?
12
What happened at the Battle (or not?) of Luding Bridge, during the Long March of Chinese Communists in 1935?
13
Did any Chinese scholars propose a heliocentric model?
14
Why is Russian far east less populated than Chinese north east regions?
4
How much (area) territory did Chinese dynasties control?