Why were fragments of the Mongol empire named after colors?

Why were the successor fragments of the Mongol empire named after colors after the death of Genghis Khan?

Colours are used in many cultures to denote directions. Chinese and Turkish colour/directions systems are very similar, which is probably not a co-incidence. 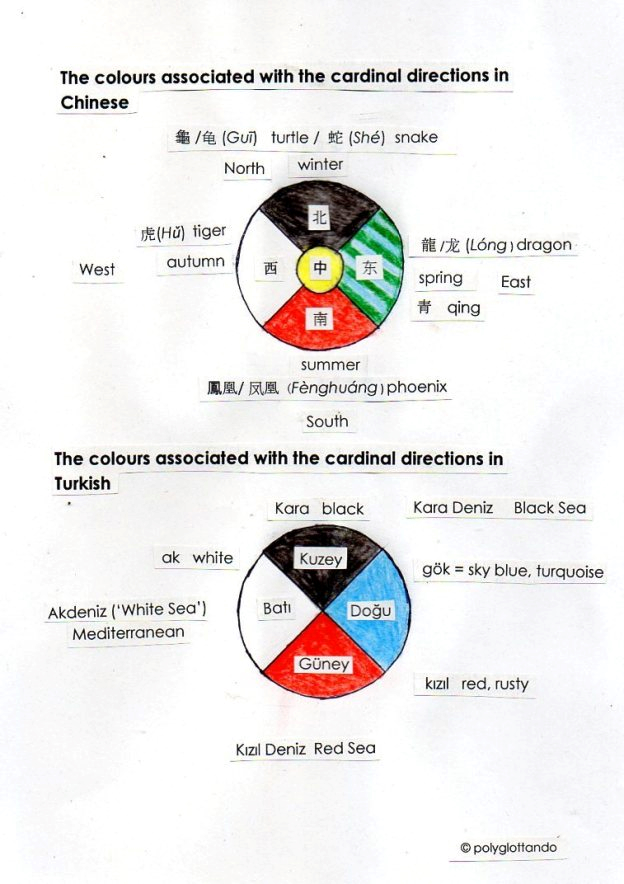 This picture from a linguistics blog compares them, and notes that the Red Sea and the Black Sea are named for their directions from Turkey. Comments on this question suggest that Belarus (White Russia) is western (old) Russia, and that there is a Red Russia also, to the south. They also provide a Wiki link for "Northern Eurasia"'s system.

This would lead to the conclusion that the blue horde was from/in the east, the golden horde the centre, and the white horde the west.

Your talking about the Golden horde, or the Ulus of Jochi. It was divided between Jochi's sons, but it remained united. It stretched from Central Asia to Eastern Europe. These were the western Mongolian domains, minus the troubled Ilkhanate of Persia.

The Ulus of Jochi was its Mongolian name. The "Golden Horde" is what the Russians called it, but it was never the actual name of the horde. This was probably derived from the name for the camp of the great Khan, the alta ordos, or "golden camp". There was a persistent legend about the large golden tent of Bhatu Khan.

The Ulus of Jochi was divided into two "wings", each ruled by a son of Bhatu. The white horde was in the west and the blue horde was in the east. It's traditionally thought that these colors symbolized the left and right flanks of Bhatu Khan if he was facing south. It also coincides with the Chinese color-direction schemes, but we're not sure if this is the reason for it. There are some discrepancies to this, as well as alternate color schemes.

Mongols used Turkic terminology when they designated the white and blue divisions of the horde. This was because it was the successor of the Cuman-Kipchack confederation, and contained mostly Turkic peoples. Turkic remained the language of the horde.

Colors were important to Tengrism, Turkic shamanism. They had a variety of symbolic and supernatural aspects. Blue was an especially sacred color that represented heaven and the sky. Gokturks meant "blue turks". The central Asian Kara Khanids and Kara Khitans meant "black...". The sacral and auspicious meanings were attached to concepts of nobility and rulership.

When the Ulus Jochi divided, the blue horde ceased to exist. The white horde continued to exist, and continued to be called the Golden Horde by Russians.

On the Golden Horde:

Some scholars have suggested that the significance of the golden color was derived from the symbolism the Chinese place on specific colors. The ancient Chinese identified the cardinal points of the compass with certain colors. Black was symbolic of north, red was the color of the south, the east was blue, and white was the color to indicate the west. Yellow was known as an imperial color, the symbolic shade that represented the center of all things.

8
How many soldiers did Ghengis Khan field?
1
Why and how were the Mongols able to invade Russia successfully?
15
How Did the Mongol Empire Get So Big?
7
What did Golden Horde get out of the alliance with Mamluks?
2
Why did Timur attempt to restore the Mongol Empire?
19
Who was the English Knight Templar holding command in the Mongol Army?
22
Were Mongol or Chinese cavalry charges among the largest in history?
26
Why was the northern boundary of the Mongol empire set where it was?