What is the oldest known work of fiction?

If folktales count, then The Poor Man of Nippur (c. 1500 BCE) probably beats the Egyptian Tale of Two Brothers by at least a few centuries. It's certainly not mythological in any modern sense, being a simple trickster tale of a clever beggar exacting revenge on an ungrateful mayor by tricking him three times (and consequently beating him up worse and worse every time).

Whether it was "meant to be believed to be true," of course, is another matter. While modern readers would certainly assume The Poor Man of Nippur to be fictional, and ancient audiences were probably no different in this respect, the tale contains no supernatural or otherwise obviously unrealistic elements that would clearly mark it as such. For all we know, maybe there really was a poor man named Gimil-Ninurta in ancient Nippur who was mistreated by the mayor and took revenge on him, even if the details of the story might have been somewhat embellished in the telling.

Still, 1500 BCE is kind of late as far as Mesopotamian history and culture goes. Surely we can find something earlier? After all, Sumerian literature goes back to around 2500 BCE in its earliest written forms (and probably much further via oral tradition, even if we can't really tell how far).

Still, even if we discount all the Sumerian epic tales of Enmerkar, Lugalbanda and Gilgamesh (not to mention the numerous tales of Inanna, even the ones where she's portrayed as little more than an ordinary young woman) as too mythological, there are also more down-to-earth kinds stories in Sumerian literature that I feel should probably qualify.

One such genre of stories are the so-called E-dubba texts, which are basically ancient children's literature. Written in Sumerian, but dating from the Old Babylonian period (c. 2000–1600 BCE), when Sumerian was still taught in scribal schools as a literary language (much as Latin was until recently taught in western schools, and sometimes still is), they describe the life of a scribal student and were meant to be copied by those very students as learning exercises.

Their content often features a moralistic and motivational tale of success through hard work and learning, as in the E-dubba A ("Schooldays") text, where a student struggles in school (and gets beaten a lot for his failures) and is about to give up his studies before receiving praise from his father and his teacher for his perseverance. That said, they also often had a humorous side, as in the E-dubba B text, a.k.a. "The Scribe and his Perverse Son" (which I unfortunately couldn't find a good online translation for), which features a long and colorful litany of Sumerian insults (including such gems as "a dog who licks his own penis" and "smelly buttocks that stink and make everything stink") that must surely have appealed to the students in their early teens who would have been tasked with copying the text.

I remember being taught that the oldest known work of fiction was the Ancient Egyptian Tale of Two Brothers.

The story was one of those found on the Papyrus D'Orbiney, which has been dated to the 19th Dynasty (c 1215 BCE) and is now owned by the British Museum: 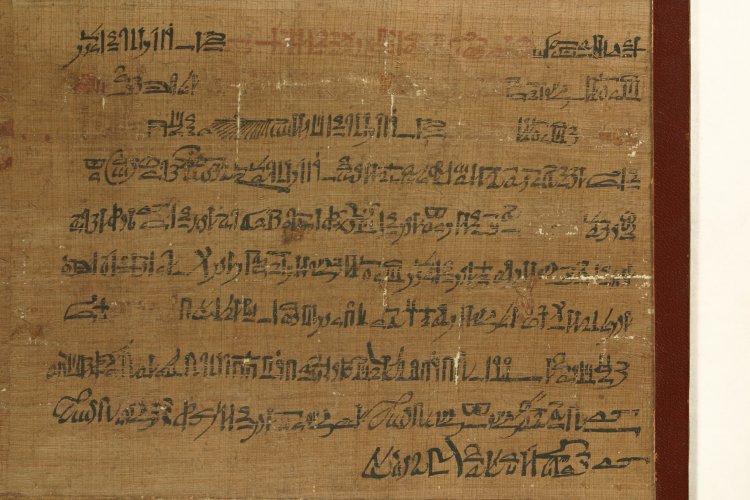 The text is written in hieratic script, but a translation is available in Miriam Lichtheim's Ancient Egyptian Literature: Volume II: The New Kingdom, pp 203-211.

Since the question of definitions has been raised, I should probably make it clear that Ancient Egyptian literary genres like Instructions & Teachings or 'Wisdom Texts', Biographies & autobiographies, or Ancient Egyptian poetry ('fiction' being defined as being a prose genre) are generally excluded when discussing texts that might have been considered 'fiction' by contemporary readers.

In addition, while it is certainly possible that other texts that we usually classify as "Narrative tales and stories" might have been considered to be fiction by a contemporary Ancient Egyptian audience, it is just as possible they were considered to be a preserved record of actual events.

A good example here is the so-called 'Tales of Wonder from King Khufu's Court', preserved on the Westcar Papyrus (and one of my personal favourite works of Ancient Egyptian literature). Dating the papyrus remains a matter of some controversy. Many (perhaps most) Egyptologists would accept Miriam Lichtheim's dating to the Hyksos Period (c. 1630–1520 BCE), although Verena Lepper argues for a rather earlier date.

Given that the subject matter involves magic and magicians, one might expect that a modern audience would consider this to be unequivocally a work of fiction (evidence to the contrary as - for example - the followers of television show like Ancient Aliens not withstanding!).

The answer is, of course, that we cannot know. As a result, works like this must be excluded here by the definition in the question.

This leaves us with a much smaller group of texts. Of that much smaller group, our tutor maintained that the Tale of Two Brothers is the earliest where we can be reasonably certain the intended audience knew that they were reading / hearing fiction.

Not the answer you're looking for? Browse other questions tagged classical-antiquity literature or ask your own question.

3
What's the oldest monomyth?
4
How much of what we know about ancient philosophers comes from oral literature?
8
Were the greatest rulers from before the Classical Antiquity known by ancient historians?
3
More honorable to plunder than to work for Germanic tribes in antiquity
7
Did the medieval Europe have an active "lowbrow" culture?
7
What is the earliest known book / novel trilogy in literature?
4
Which SF author was unable to check his own work out of the library due to insufficient security clearance?
3
Were the ancient Greeks very poor compared to the ancient Persians?