During World War II, Churchill envisioned a possible Allied invasion of northern Norway called Operation Jupiter. This idea was "tabled" (postponed) in 1941, because Britain felt that it lacked the naval (and air) resources to pull it off.

In 1942, Britain got additional naval and air resources from America, and successfully pulled off Operation Torch, the invasion of North Africa. Using that as a basis for comparison, how did the Allied naval and air resources actually used in Operation Torch compare with those called for in Operation Jupiter? What other military issues (geography, supply, etc.) might have argued in favor of Torch over Jupiter?

According to James Macgregor Burns, in "Roosevelt: Soldier of Freedom," Churchill revisited "Jupiter" in mid-1942 before acquiescing to "Torch." Also, while there are many sources on the Torch Operation, I can't find (or have overlooked) the relevant details for Jupiter. I want to make a (factual) comparison of the two sets of requirements (actual for one, proposed for the other), to better understand the decision-making process. One commenter suggested that the answer may lie in the two sets of geographies instead of the two sets of force levels, if the two required force levels were comparable.

Since you say you already have multiple sources for Operation Torch, I shall limit this answer to sources for the resources required for the planned Operation Jupiter.

Scroll to the end for a Schedule of Total Resources prepared as part of a note by the Cabinet Secretary dated 7 August 1942.

The OPERATION "JUPITER". Report, dated 24 September 1942 (CAB 80/64/58) provides details of the 'finalised' plans for implementing the operation in early 1943 (subject to the results of Operation Torch). This report is currently available as free downloads.

I suspect that this report contains the details of the "other military issues" that you are looking for.

From the minutes of meetings of the War Cabinet, the primary motivation for continuing planning for Operation Jupiter, despite the clear lack of resources to execute the plan alongside planned invasions of France, appears to have been to provide some relief to Russian forces on the Eastern Front. There is no suggestion that there was ever any competition for resources with Operation Torch.

OK, the first thing to note is that the documents relating to the planning for Operation Jupiter are held by the UK National Archives at Kew under the reference PREM 3/257/2. These are available for public access as their closure status is: Open Document, Open Description.

These preliminary plans were prepared between May and June 1942. Unfortunately, they have not yet been digitised, and so are not available to download. If you want to see them, you either need to visit the archive in person or employ someone to access the records on your behalf.

The records of the War Cabinet have been digitised, but there is now a charge (currently £3.50 per record) to download copies. There is, however, a preview option which allows you to check whether the information you want appears in that document.

The Joint Planning Staff held a meeting in the Cabinet War Room on Sunday, 7th June, 1942 at 11 a.m. The minutes of that meeting are held under CAB 84/4/114. Operation Jupiter was the third item on the agenda:

Unfortunately, those records have also not yet been digitised.

Churchill had set out his position in a secret memorandum dated 2nd June 1942 CAB 80/63/5. This is currently part of a record set that is available to download for free.

At the very start of the memorandum, Churchill makes it clear that Operation Jupiter is only being considered as an alternative to Operation Sledgehammer:

There is no mention of Operation Torch.

Although planning for both Operation Jupiter and Operation Torch was being carried out during the summer of 1942, it is clear that it was never an either/or situation.

From an initial review of the previews of some of those War Cabinet minutes, it seems the primary concerns for Operation Jupiter centred around two main issues:

The allies would need to provide sufficient air and naval resources to counter those threats, in addition to the resources required to execute the landings.

"... about ten aerodromes in Norway from which the German Air Force could operate against both our expedition and our Russian convoys. To capture most or all these aerodromes would require a very large force, and a correspondingly large amount of shipping. The Chiefs of Staff were therefore doubtful whether Operation "JUPITER" as at presently conceived was practicable."

Those Chiefs of Staff committee papers are, presumably, held separately in WO 106/5174 which has not yet been digitised.

The minutes of a second meeting of the War Cabinet on 8 June 1942 (ref CAB 79/21/22) includes an Aide-Memoire on Operation Jupiter, prepared by the Chiefs of Staff.

This includes the observation that the operation would require the diversion of shipping currently being employed for the transport of US forces to the European theatre. It further noted that if they were to proceed with Operation Jupiter, the requirements in terms of assault shipping and landing craft were such that:

"Training for "Round-Up" would virtually stop"

[NOTE: Operation Roundup was plan for the invasion of Northern France by Allied forces in 1942]

Another memorandum from the Prime Minister, dated 13th June 1942 (ref CAB 80/63/18) gives an overview of Churchill's vision for Operation Jupiter at that date, although it lacks precise numbers. This record is also currently available as a free download as part of the dataset mentioned above.

It is worth noting that the next memo from the PM in that series, dated 15th June 1942, states that preparations for Operation Sledgehammer, and Operation Round-Up were continuing in earnest.

The document also includes details of the estimated enemy forces in Northern Norway and adjacent territory.

This seems to be the lack of naval and air resources you mention in the question.

The minutes of a cabinet meeting dedicated to Operation Jupiter on 9 July 1942 (ref CAB 79/56/67) expanded on the air strike-force that was proposed for Murmansk. It stated that planners should assume a minimum of 2 squadrons of Spitfires and 4 squadrons of Hurricanes, supplemented by a squadron of torpedo bombers. It also stated that the operation would not happen before October 1942.

That led, in turn, to the Note by the Secretary on Operation Jupiter dated 7 August 1942 (CAB 80/64/2). Again, this record is part of a dataset that is currently available as a free download.

Amongst a wealth of other information about the plans for Operation Jupiter, this note by the Cabinet Secretary includes a Schedule of Total Requirements: 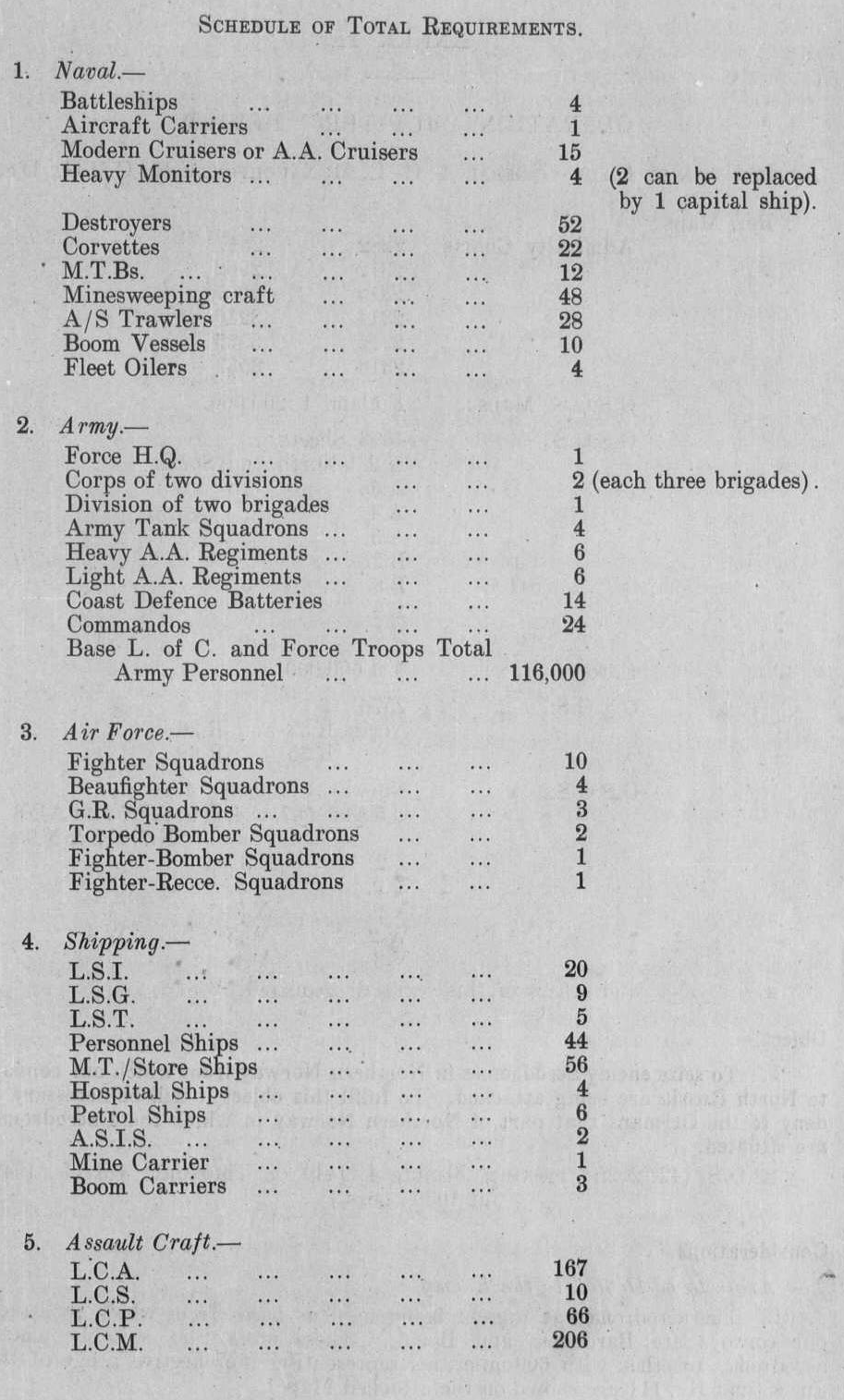 This list appears to be the information on resource requirements that you were looking for.

By 16 September 1942, the minutes of the War Cabinet (ref CAB 79/57/31) were suggesting the planners were of the opinion that Operation Jupiter might be carried out in January or February 1943 (yes, they really were considering an invasion of Norway in February!), subject to agreement with the other allied leaders.

A War Cabinet 'Conclusion', dated 21 September 1942, (originally designated Confidential Annex to WM (42) 127 and classified Most Secret, now ref CAB 65/31/21, which is currently available as a free download) includes draft copies of the telegrams to be sent to FDR and Stalin. These provides some insight into the political background underpinning Operation Jupiter.

The Conclusion of 21 September also recorded that:

"... United States authorities had given orders that 180 Airacobra aircraft, loaded in ships forming part of the P.Q. 19 convoy, should be unloaded as they were required for Operation Torch."

going on to note that the Russians:

and that, given the planned suspension of the P.Q. convoys:

"... it was clearly necessary to give further consideration to Operation Jupiter."

Consequently a memorandum and report were prepared by by the Chief of Combined Operations. These were titled OPERATION "JUPITER": ASSAULT SHIPPING AND LANDING CRAFT, dated 23 September 1942 (CAB 80/64/57) and OPERATION "JUPITER" Report, dated 24 September 1942 (CAB 80/64/58) respectively, and give a high-level view of the 'finalised' plans (all of which were subject to the results of Operation Torch). These documents are also currently available as free downloads.

The information in the Memorandum of 2 September, and the Report of 24 September, probably contain sufficient detail of the "other military issues" you were looking for to allow comparisons to be drawn with Operation Torch.

Not the answer you're looking for? Browse other questions tagged world-war-two norway or ask your own question.

8
Did the Allies ever seriously contemplate a "Northern Intervention" in Russia during World War II?

9
Is there a way to find who died and what American plane crashed over a spot in Romania in 1942/1943?
11
How strong a land force did Germany need for a conquest of the British Isles in the summer of 1940?
4
How did the supplies shipped in winter over the "Road of Life" to Leningrad compare to those at other times of the year?
23
Why did the USSR stop in the Winter War against Finland in 1940?
29
Why did the Allies Invade French North Africa?
6
How important was the Suez Canal to the Allies during WWII?
8
Did the Allies ever seriously contemplate a "Northern Intervention" in Russia during World War II?
6
What were Helfrich's orders for Doorman in 1942 prior to the Battle of the Java Sea, and did he comment on these in later life?
2
How did the "weather conditions" for an invasion at Pas de Calais compare to those of Normandy?
7
How did East Indies oil lose its "top billing" in the Pacific War as the war went on?